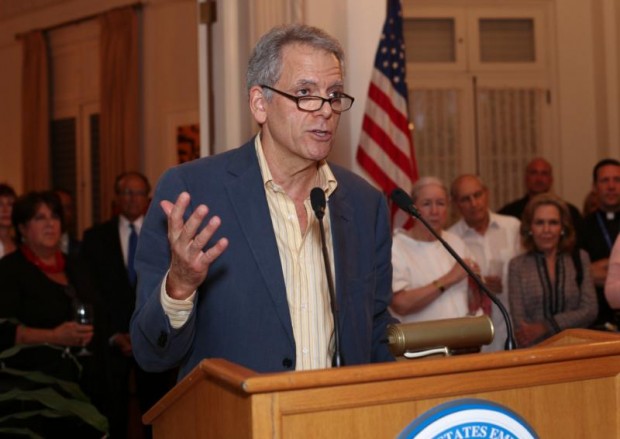 U.S. diplomat Jeffrey DeLaurentis talks to American Catholics during a reception at the U.S. Embassy residence in Havana Sept. 20. The group traveled to Cuba to attend Mass and other events with Pope Francis. (CNS photo/Tom Tracy)

HAVANA (CNS) — The top U.S. diplomat to Cuba told a group of U.S. Catholics that they can help play a role in their country’s normalization of relations with Cuba.

“As we all know, this visit from Pope Francis comes in the context of his role in the U.S.-Cuba rapprochement process, and obviously to reach normalization relations with Cuba it will be a long and complex role,” Jeffrey DeLaurentis, a career member of the foreign service and charge d’affaires at the U.S. Embassy to Cuba, told pilgrims from the archdioceses of Boston and Miami during an evening reception Sept. 20.

“The pope called it a process, and we are making progress every day. It is a process that extends far beyond the pope as an individual or even the leader of the Catholic Church; it involves a lot of you, and this is why your presence here in Cuba today is very important,” said DeLaurentis, who attended Pope Francis’ Mass earlier that day in Revolution Square.

“Some of you were able to visit Cuba on the historic visit of Pope Benedict XVI in 2012, but under very different diplomatic circumstances, so a lot can happen in a few years,” he said. “Without stating the obvious, a papal visit is of great significance to the Cuban people: There have been three in the last 17 years, which seems to me are indications of Cuba’s evolving relationship with the world, with the Roman Catholic Church and now with the people of the United States.”

Pope Francis, he said, has talked about building bridges and reconciliation with Cuba. “Cardinal Ortega mentioned that today during the Mass — that is what he was trying to get at when he made the specific request that Cubans on the island and Cubans all over the world do their best to make a special effort to move forward to reconciliation and the future.”

“The Catholic Church is very experienced in the way of diplomacy and has 2,000 years of practice,” he told the pilgrims. “It survived and flourished in exceptionally difficult circumstances across time and cultures precisely because it operates with skillful diplomats here.

“The two principal diplomats that the Holy See has here in Cuba are excellent; one is from Italy and the other from Croatia,” he told the Americans.

“As we plow ahead to build a more constructive relationship, keep us in your prayers as we move forward,” he told them.

Boston Cardinal Sean P. O’Malley and Miami Archbishop Thomas G. Wenski were in Cuba for the Sept. 19-22 papal visit, but were not at the reception.

NEXT: After decades of separation, Cuban-Americans return to homeland