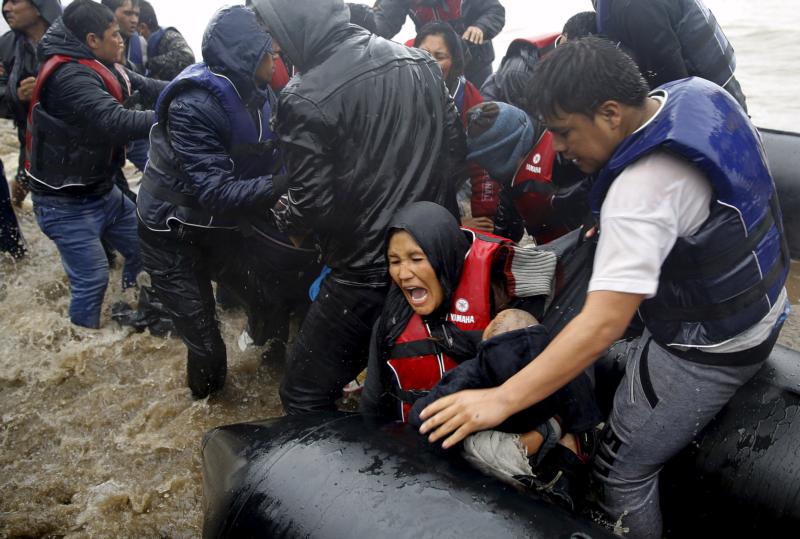 Afghan mother holds her baby as she struggles to disembark raft during a rainstorm in Lesbos, Greece, Oct. 23. Members of Congress were told in Washington that Europe's refugee crisis demands global response. (CNS photo/Yannis Behrakis, Reuters)

WASHINGTON (CNS) — Lawmakers and witnesses in a congressional committee hearing room Oct. 20 were not shown pictures of the vast number of refugees crossing East European borders each day.

But there is no shortage of images from daily news reports of the throngs of men, women and children walking along streets, open fields and train tracks escaping their homelands. The refugees, primarily from Syria, Iraq and Afghanistan have been crammed in boats and lined up behind barricades or barbed wire fences. Reports in recent days showed many refugees, including dozens in wheelchairs, stuck in mud-soaked fields in the rain trying to get to Slovenia.

In the two-and-a-half-hour hearing convened by the Commission on Security and Cooperation in Europe, also known as the Helsinki Commission, lawmakers and witnesses alike described the refugee situation as enormous, unparalleled and one that cries out for a stronger global response.

Rep. Chris Smith, R-New Jersey, the committee chairman, said it was “the largest refugee crisis since World War II” and Anne Richard, assistant secretary of state for population, refugees and migration, said the influx of refugees is a “very challenging situation.”

“The scale of this migration is much bigger than before,” she added in what was possibly the greatest understatement of the day.

While congressional leaders heard accounts about the enormity of the challenge to provide food, clothing and shelter for the refugees and then find homes for them, the lawmakers repeatedly expressed concern that terrorists could be among the influx and wondered what was being done to make sure they were not part of resettlement efforts.

Richard said resettlement agencies are particularly on the lookout for such a threat, which partially explains the 18- to 24-month vetting process for refugees.

The committee is charged with looking at how the United States, European governments and regional bodies such as the Organization for Security and Co-operation in Europe and the European Union, are responding to the flood of immediate and long-term needs of refugees.

Rep. Steve Cohen, D-Tennessee, reiterated Pope Francis’ message to Congress in September urging them to follow the Golden Rule. He said as a Jew, he understands that the U.S. is comprised of immigrants and said our country needs to do all it can to “save people from ravages of war.”

Sean Callahan, chief operating officer of Catholic Relief Services, also mentioned Pope Francis, saying he has led in the effort to help modern-day refugees by urging every Catholic parish in Europe to reach out and assist them.

“He reminds us of our moral obligation to help the stranger,” Callahan said, emphasizing that the needs in the crisis cry for much more than quick fixes.

Recounting a recent visit to the Balkans, where tens of thousands are making their way across the border of Serbia and Croatia, he said it is “heartbreaking to imagine walking” in their shoes and to picture “one’s own life in such chaos: first, suffering violence in one’s home community; then biding time in a neighboring country, humbly receiving charity.”

He said CRS has been working throughout the Balkans to provide emergency assistance but he said these efforts will become more challenging with the onset of winter and an increased need for shelter, medical assistance, and warmer clothes.

In the past three years, he said CRS and its partners have helped nearly 800,000 people and spent more than $110 million in response to the Syrian crisis.

Callahan was not the only one to point out the desperation in the current situation.

Shelly Pitterman, regional representative for the Office of the U.N. High Commissioner for Refugees, stressed that Europe must do more and can “no longer afford to continue with this fragmented approach.”

He said the European response so far to the massive influx of refugees has created “chaos and desperation among thousands of refugee women, men and children.”

And David Sullivan, the European Union ambassador to the United States, stressed the crisis is not just for Europe but is global and “fueled by conflicts, inequality and poverty.”

He said the European Union and its member states are “firmly committed to the promotion and protection of the human rights of migrants. Despite the influx, we do not remove or return genuine refugees, we respect the fundamental rights of all persons arriving in the EU, and we invest major resources in saving lives at sea.”

He also urged the U.S. government to:

— Support the integration of Syrian refugees in neighboring countries.

— Directly fund international private organizations that can get assistance on the ground faster and navigate potential governmental barriers.

— Fund humanitarian and development assistance in refugee host countries such as Lebanon, Jordan and Turkey.

— Increase funding for emergency education and other protection efforts for children.

— Commit to high-level negotiations towards a political solution to the conflict in Syria.

Although he highlighted the work that has already been done by Jordan, Lebanon and Turkey to aid refugees, he said the “scale of suffering has outpaced their ability to respond to it. It has also overwhelmed the capacity of the international humanitarian and refugee systems.”

“The exodus to Europe cries out that so much more must be done,” he said.