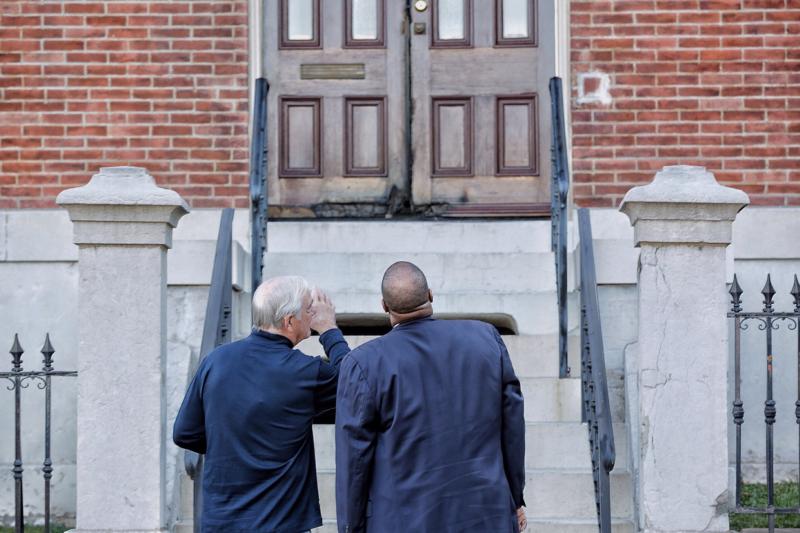 Howard Matthews, a volunteer at the Shrine of St. Joseph in St. Louis, talks with Pastor Rodrick Burton of Northside Missionary Baptist Church about a fire at the shrine. Civic authorities in St. Louis are investigating a series of fires at a number of churches in the city. (CNS photo/Lisa Johnston, St. Louis Review)

ST. LOUIS (CNS) — Normally, few would associate the two men as being in a brotherhood.

One is African-American, in his 40s, the pastor at New Life Missionary Baptist Church.

The other is Anglo-American, in his late 60s, a Catholic priest for the Archdiocese of St. Louis and rector of the Shrine of St. Joseph near downtown St. Louis.

Before Oct. 22, they had never met, but at about 11 a.m. that day, they stood together in the foyer at St. Joseph rectory, linked not only as men of God but now as victims of violence.

For the first time, Father Dale Wulderlich surveyed the damage to the rectory front doors from a deliberately set fire 10 hours prior — the seventh such arson at a St. Louis area church in two weeks.

The Rev. David Triggs’ church in Walnut Park was hit five days earlier and, to this point, has suffered the most damage. Vinyl siding was melted and rafters in the small entryway were burned, but the sanctuary was unaffected, protected by double doors. Sunday services were held outdoors the next day.

Likewise, interior doors kept fire out of the St. Joseph rectory; firefighters, alerted by smoke detectors and fire alarms, quickly extinguished the fire. Other than the doors themselves and the smell of fire, the rectory and the church were undamaged.

As Father Wunderlich surveyed the damage, Rev. Triggs pointed to the mail slot on the rectory doors.

“They could have squirted accelerant through the mail slot because that’s what happened at my church,” he told Father Wunderlich. “Praise God, it wasn’t worse.”

In all of the fires, sanctuaries were undamaged.

The arson, at St. Joseph specifically and at the churches in general, left Father Wunderlich with “question marks. I don’t know what else to say. The first question that comes to my mind is, ‘Why would anybody want to do it.’ I’m sure that’s on the mind of police officers and arson specialists. What would be the motivation for something like this?”

Rev. Triggs theorized the responsible person has, or people have, a beef with the “body of Christ,” and that the attacks are related to “spiritual matters.”

“I do believe it’s a spiritual matter, these issues, and we just have to depend on the Lord and our Christian faith that we’re going to pray for God to forgive and pray that he is apprehended.”

Rev. Triggs described himself as briefly angry then “very, very, very, very heartbroken” when he learned about the arson the morning of the 22nd before going to St. Joseph to show his support.

“It took me to get down on my knees and find that pocket of peace that Christ has given us,” he told the St. Louis Review, newspaper of the Archdiocese of St. Louis.

In a statement, the archdiocese called the church fires “saddening acts of violence in a community already devastated by violence and division. … It is unimaginable why these acts of violence have taken place at churches which are vitally important parts of our community.”

St. Joseph Shrine is the second Catholic church to be targeted by arson. St. Augustine in north St. Louis also was hit.

“The doors of St. Augustine and the Shrine of St. Joseph can be replaced. We are thankful that no one was injured in these incidents,” the statement read. “We will pray for and forgive those who have committed these acts.”

Father Wunderlich echoed the statement, then asking, “Why?”

“When I saw the other churches on the news, it was the same question: Why would they want to do anything like that?” he said. “Then, I woke up this morning, ‘My God, this is the Shrine of St. Joseph.’ All of a sudden, I feel an interesting kind of kinship.”

“We’re all being vandalized, victims together,” said Father Wunderlich, who resides at Our Lady of Lourdes Parish in University City.

The arsons “accelerate the demand that we stand together; that’s exactly where our ministry stands,” said Rev. Triggs, whose congregation soon will become United Believers in Christ Ministries in a rebranding “to promote diversity in the community, in the body of Christ. At this moment, mark the day for the body of believers: It has drawn us together.”

“No. The brotherhood is there already because of the whole Christian church,” he said. “This kind of emotion brings it out a little more clearly. We’re glad to have the brotherhood. We just don’t want it empathized like this.”