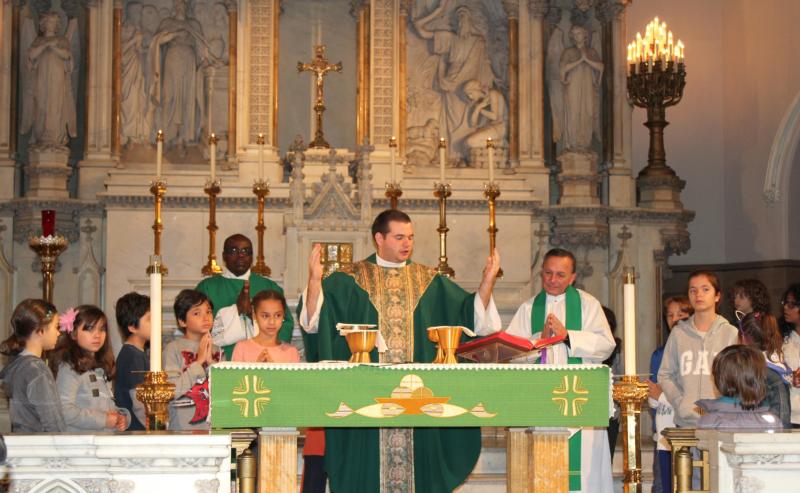 Children stand at the altar as Father Christopher Bethge celebrates Mass Oct. 18 at St. Agnes Church in Brooklyn, N.Y. The Sunday Mass drew a larger congregation than usual because the church was the site of a "Mass Mob" event, an evangelization effort aimed at boosting regular Mass attendance. (CNS photo/Marie Elena Giossi, The Tablet)

Inspired by the idea of a “flash mob,” the NYC Mass Mob organizes people through social media to attend Mass at a set date and time at Catholic churches around New York’s five boroughs.

The first Mass Mob took place in 2013 in Buffalo, and since then similar groups have formed across the country to generate interest in Catholic churches where attendance is declining.

“Our main goal is to bring people to church,” said Michael J. Cadigan, a Bayside resident who founded the NYC Mass Mob last year. The movement has already popped up at St. Matthew’s Church in Crown Heights and St. Clare Church in Rosedale.

Cadigan launched the evangelization effort to inspire people to connect with the Catholic faith, go to Mass and get involved in parish communities.

The Oct. 18 visit to St. Agnes Church, a worship site of St. Paul-St. Agnes Parish, was determined by public vote via the NYC Mass Mob website earlier this year. The church was vying against four other Brooklyn diocesan parishes, but secured the most votes.

And while the church wasn’t literally mobbed with people at the 9:15 a.m. English Mass, there were new faces among the congregation, which included people of all ages and ethnic backgrounds.

“It’s not about the numbers; it’s about a personal relationship with God,” noted Cadigan, who attended Mass with NYC Mass Mob members and followers. “The Holy Spirit brings whoever needs to be here.”

Msgr. Joseph Nugent, pastor, welcomed parishioners and visitors, and invited newly ordained Father Christopher Bethge, who served his diaconate year in the parish, to be the main celebrant of the Mass.

“There are so many young families moving into the area and they’re not necessarily unchurched; they just need an invitation and some encouragement to come back,” La Civita told The Tablet, newspaper of the Brooklyn Diocese.

That’s why La Civita nominated the church for the NYC Mass Mob visit. He and volunteers asked for votes via social media, the parish website and public posters. A local blogger and other parishes lent support.

For this church, the NYC Mass Mob visit is part of a larger, ongoing revitalization effort, which reflects the gentrification underway in the wider community.

Young families, professionals and new European immigrants are steadily settling into the brownstone-lined blocks around the church, which was founded by Irish families 137 years ago. Italian, Latino and African-American parishioners have worshipped there through the years. Now an influx of French families prompted the church to start offering an 11 a.m. French Mass on Sundays.

Msgr. Nugent is thrilled the church community is “growing and attracting young couples and children. There’s a new openness here,” he said.

Since becoming pastor last year, he’s been on a mission to let residents of the surrounding neighborhood know that the parish is “open for business.”

To generate further interest and involvement, the parish is hosting “Sounds on Sackett,” a monthly concert series showcasing the church’s concert grand piano, which was recently restored through a crowd-funding campaign. The first performance was Sunday afternoon.

La Civita hopes the architecture and grandeur of the neo-Gothic church will stir something in the hearts of all who enter its doors. “Hopefully, they’ll want to know more about the church, the liturgy and Catholicism in general,” he said.

The church also has launched a new website, started a Spanish-language Bible study and provides meeting space for parents and preschoolers on Sunday mornings.

“You have to use different methods to attract new parishioners,” shared longtime parishioner Lydia Colon-Fores, who enjoyed meeting newcomers at Mass last Sunday. “Social media is one way, but you still need personal outreach.”

Bill Gorman greeted all who entered church, and was heartened by the “bigger than usual” attendance.

“I hope people say, ‘Oh, there’s something here we’ve been missing,’ and then come back,” said Gorman, a fourth-generation parishioner, who coordinates the religious education program. This fall, enrollment is up to 80 children.

Before the final blessing, Msgr. Nugent invited newcomers to stand and be welcomed with applause.

The congregation then moved to the parish hall for coffee and cake, where Tiziana and Chris Martinez chatted with parishioners as their children went to religious education classes.

The Martinezes moved to the area over a year ago, and explored several churches before choosing St. Agnes as their church.

“There’s a good community of people here,” said Tiziana, a native of Rome. “I want my children to have the same good experiences in church that I had growing up.

“Everybody here wants the same thing — to share the faith and teach our children the faith,” she said.

Giossi is on the staff of The Tablet, newspaper of the Diocese of Brooklyn.