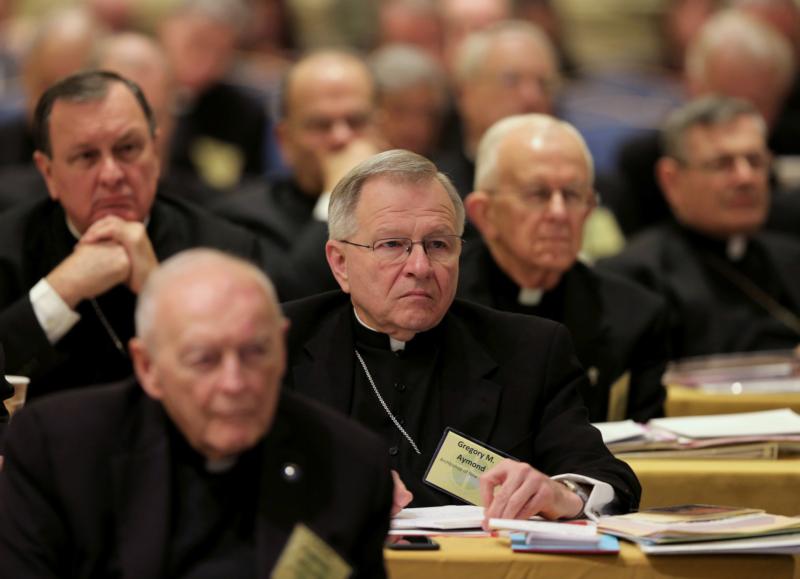 Archbishop Gregory M. Aymond of New Orleans, center, and other prelates listens to a speaker during the 2014 annual fall general assembly of the U.S. Conference of Catholic Bishops in Baltimore. At this year's Nov. 16-19 assembly, the bishops, among other things, will address USCCB priorities and a statement on political responsibility. (CNS photo/Bob Roller)

WASHINGTON (CNS) — The U.S. bishops will consider whether to approve a new introductory note and a limited revision of their quadrennial statement on political responsibility during their Nov. 16-19 fall general assembly in Baltimore.

The statement, “Forming Consciences for Faithful Citizenship,” is reissued every four years and takes into account the latest issues taking center stage in the political arena. The document, which in general calls for Catholic voters to consider the common good when going to the polls, has been released before every presidential election for almost four decades.

What a U.S. Conference of Catholic Bishops news release described as “a limited revision” and new introductory note for “Faithful Citizenship” were prepared by a working group led by Cardinal Daniel N. DiNardo of Galveston-Houston, vice president of the USCCB.

The bishops also will discuss and vote on a proposed formal statement on pornography, “Create in Me a Clean Heart: A Pastoral Response to Pornography.” The bishops had given their approval a few years ago to craft a statement on the subject.

They are scheduled to discuss and vote on a proposal to take up a one-time national collection to fund the completion of the Trinity Dome in the Basilica of the National Shrine of the Immaculate Conception in Washington. No structural work is needed, but shrine officials have been in planning meetings about the ornamentation of the mosaics on the underside of the dome, visible from within the shrine. The big, blue dome has no ornamentation although the shrine’s other domes do. No date has been set to begin and no deadline to complete it. As of yet, no cost has been affixed to the project.

The bishops also will hear a report from the USCCB Subcommittee on the Church Latin America on the golden anniversary of the annual national Collection for the Church in Latin America.

Three canonization causes also will go before the bishops for the canonical consultation required to advance their causes:

— Father Aloysius Ellacuria was a 20th-century Claretian Missionary priest from the Basque region of Spain who spent much of his priestly ministry in the American Southwest, including Los Angeles, San Diego and Phoenix. He was regarded as a mystic who urged spreading the message of Our Lady of Fatima.

— Sister Ida Peterfy was the Slovak-Hungarian-born founder of the Society Devoted to the Sacred Heart. She endured the deprivations of World War II and the onset of Soviet domination of her homeland before she fled, first to Toronto and then to Los Angeles. She had a puppet show on local TV, “My Friend Pookie,” which was popular for several years and became nationally known by educators and families, then developed the “Sacred Heart Kids’ Club” series of half-hour video instruction on the Catholic faith.

— Antonio Cuipa, who along with more than 80 “companions,” was martyred for the faith in colonial Florida between 1549 and 1706. Cuipa, an Apalachee Indian converted by Franciscans, may have been studying for the priesthood when he was seized by another Indian band, nailed to a cross and set afire. Witnesses said Cuipa had a vision of Mary while he was dying.

The bishops will discuss and vote on proposed revisions to strategic priorities for the next USCCB planning cycle, which cover 2017-20, following up on input given a draft version of these priorities during their June meeting in St. Louis.

A vote will be taken on the inclusion of “Excerpts From the Roman Missal: Book for Use at the Chair” in U.S. dioceses.

Presentations will be made to the bishops by, among others, Dominican Sister Donna Markham, president and CEO of Catholic Charities USA. The national network launched its “#End45” campaign to cut U.S. poverty just ahead of Pope Francis’ visit.

Carolyn Woo, president and CEO of Catholic Relief Services, will join with Archbishop Paul S. Coakley of Oklahoma City, CRS chairman, in a presentation on how CRS programming is responding to Pope Francis’ encyclical on the environment, “Laudato Si’.”

Cardinal Sean P. O’Malley of Boston will give an update on diocesan Project Rachel ministries for post-abortion healing.

Archbishop William E. Lori of Baltimore, chair of the USCCB Ad Hoc Committee on Religious Liberty, will introduce a trailer to a movie on “Dignitatis Humanae,” the Second Vatican Council’s decree on religious freedom.

Archbishop Timothy P. Broglio of the Archdiocese for the Military Services will give a presentation on the need to increase the number of priests for the military chaplaincy.

The USCCB Working Group on the Life and Dignity of the Human Person will report on a communications research project and planning for a convocation.The bishops also will hear recommendations on implementing the Year of Mercy, which starts Dec. 8, the feast of the Immaculate Conception.

The bishops will choose a treasurer-elect for the USCCB as well as chairmen-elect for six standing committees: Divine Worship; Migration; Domestic Justice and Human Development; Clergy, Consecrated Life and Vocations; and Laity, Marriage, Family Life and Youth. Bishops also will be chosen for the boards of CRS, the U.S. bishops’ overseas relief and development agency, and the Catholic Legal Immigration Network, or CLINIC.

The bishops also are scheduled to vote on the 2016 USCCB budget and the 2017 diocesan assessment that helps fund USCCB operations.

The public session of the bishops’ four-day assembly is only the first two days.

PREVIOUS: Brooklyn church one of latest to attract ‘Mass Mob’ for Sunday Mass

NEXT: Pennsylvania priest builds ministry one Lego at a time