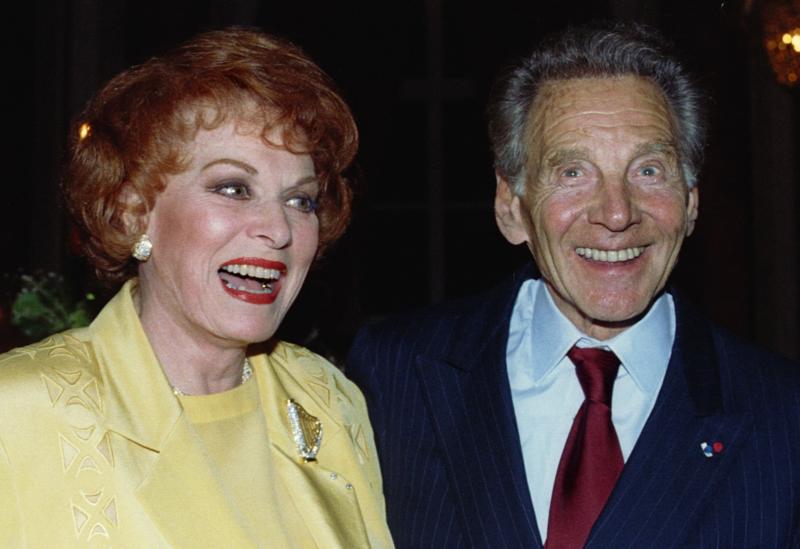 In this Sept. 4, 1994, file photo, actress Maureen O'Hara and actor Jean-Pierre Aumont are seen at a film festival in Deauville, France. A lifelong Catholic and native of Ireland, O'Hara died Oct. 24 in Boise, Idaho. She was 95. (CNS photo/Stringer, Reuters)

A lifelong Catholic and native of Ireland, she moved to Boise in 2012 to be close to her grandson.

Among her notable film credits were “How Green Was My Valley,” “Miracle on 34th Street” and “The Quiet Man.”

She was once known as the “Queen of Technicolor” because when that film process first came out, it highlighted her fair complexion, green eyes and red hair.

She starred and worked with some of the biggest actors in Hollywood, including John Wayne, Edmund Gwenn, Tyrone Power, Douglas Fairbanks Jr., Henry Fonda, James Stewart and Errol Flynn; she also was known for her work with legendary director John Ford.

Born Maureen FitzSimons outside of Dublin in 1920, one of six children, her first major role was opposite Charles Laughton in 1937’s “Jamaica Inn” by director Alfred Hitchcock. She began working in Hollywood in 1939 as the Gypsy Esmeralda in “The Hunchback of Notre Dame.” She spent the next three decades in film, with 1952’s “The Quiet Man” with John Wayne ranking on many critics’ top 10 list of best American romances of the 20th century.

In 1968, she married test pilot Charlie Blair and retired from movie-making. In a 1998 interview with Catholic News Service, she said her decision was “the most intelligent, smartest and most wonderful thing anybody could have ever done. It was a wonderful life, and I would do it all over again.”

When Blair died in 1978, she considered a comeback, only to find few leading roles for women of her age.

In 1991, she co-starred with John Candy in “Only the Lonely,” and expanded mediums to include television with 1995’s “The Christmas Box.” In 2000, she made her last appearance, on the small screen, in “The Last Dance.”

In the interview with CNS about her Catholic upbringing, O’Hara said she rejected the idea of becoming a nun as a youth because “I was too strong, too hard-headed.” But one of her sisters, Peg, joined the Irish Sisters of Charity, turning down a scholarship to study opera at La Scala in Milan to follow her vocation.

When O’Hara was 19, she married an Englishman, George H. Brown, who worked in films. The marriage took place in secret and was annulled two years later. O’Hara then wed American film director, William Houston Price, in 1941; they had a daughter but the marriage ended in divorce in 1953, reportedly because of Price’s alcohol abuse.

“From the Abbey stage (in Dublin) to the big screen,” Irish Prime Minister Enda Kenny tweeted, “Maureen O’Hara was one of our best — she loved this country and never forgot where she came from. RIP.”

In 2014, she received an honorary Oscar. In 2011, O’Hara was formally inducted into the Irish America Hall of Fame.

No details were released about arrangements for her funeral and burial.

O’Hara is survived by her daughter, Bronwyn FitzSimons of Glengarriff, Ireland; her grandson, Conor FitzSimons of Boise, and two great-grandchildren.

Brown is editor of the Idaho Register, newspaper of the Diocese of Boise.

PREVIOUS: House bill holds up federal funds for Planned Parenthood for a year

NEXT: Cause opens for Florida martyrs who proclaimed faith ‘at all cost’