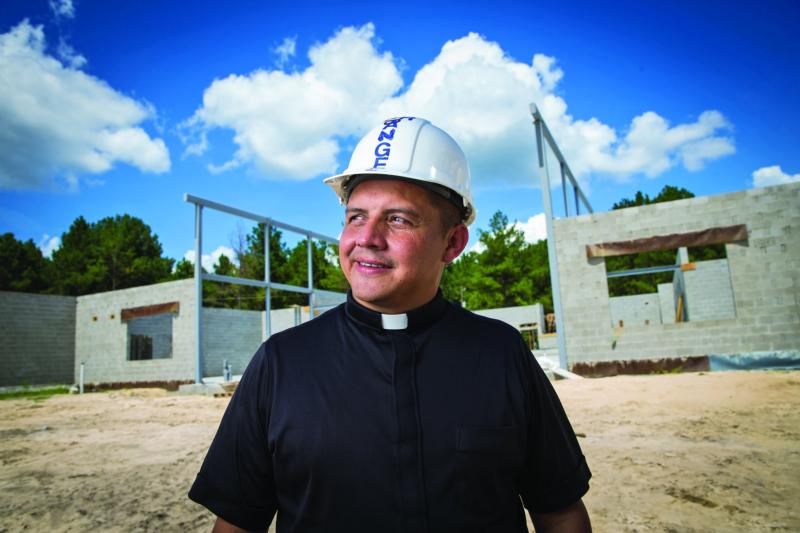 RAY CITY, Ga. (CNS) — The construction of St. Anthony of Padua Church in Ray City, scheduled to be dedicated in March, is a dream come true for Catholics in this area of southern Georgia near Valdosta in the Savannah Diocese.

Retired Savannah Bishop J. Kevin Boland said, “What you see happening in Lakeland and in Adel, in Nashville and in Ray City, in all of that part of south Georgia, that’s kind of a miracle in the South. The reason why the church there is able to accomplish this — with the help of Catholic Extension, of course, and with the help of others — is the vibrancy of the faith of the Catholic people.”

For the past eight years, Father Fredy Angel has been the pastor of St. Anthony of Padua’s predecessor parish — Queen of Peace in Lakeland and its missions — which covers three counties. In that role he has been the energetic, tireless and enthusiastic shepherd, teacher, motivator and guiding force behind what one of his parishioners called a “revival” among Catholics there.

“In the Protestant churches here, they talk about revival week,” said parishioner Chris Chammoun. “But really with us it’s been a revival of eight years. We’ve been reviving our spirit and bringing in new people who are excited about coming to church.”

In the process of that revival, the pastor has also bound a diverse community of African-American, white, Latino and Asian-American Catholics closer together; has planted, grown and nurtured a deeper faith among his parishioners; has motivated and educated children, youth and adults; has earned the respect of the area’s larger, non-Catholic community; and now leads the parish in the building of a new church.

Undertaking such an ambitious construction project has instilled pride and great expectations in its members and is already resulting in a more prominent and visible presence of Catholicism in an area where Catholics are only a small minority. 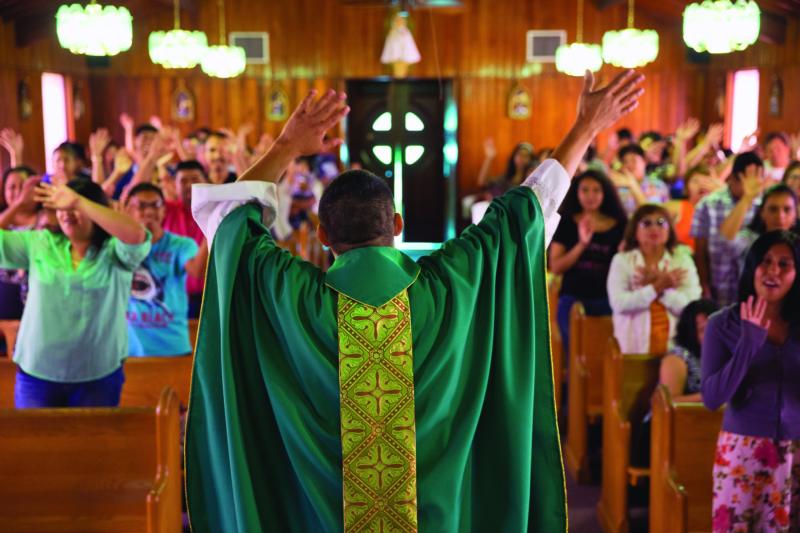 On Oct. 5, Catholic Extension announced that Father Angel is the recipient of the 2015-16 Lumen Christi Award from Catholic Extension, which will be presented Nov. 8 during a celebration in Ray City. “Lumen Christi” is Latin for “Light of Christ.” The award honors an individual or group who demonstrates how the power of faith can transform lives and communities. Recipients are honored not only for the light and hope they bring to forgotten corners of the country, but for inspiring others to be “Lights of Christ” as well.

Catholic Extension President Father Jack Wall said, “We are honoring Father Fredy Angel for the inspiration he gives not only to the growing Catholic population in southern Georgia, but to all American Catholics. Father Fredy embodies the service and courage of America’s missionary priests who are playing a critical role in building up the fabric of our church and of this nation.”

Since its founding in 1905, Chicago-based Catholic Extension has been supporting the work and ministries of U.S. mission dioceses, including outreach to Catholic teens and young adults.

At 41, Father Angel is the second-youngest Lumen Christi recipient, and the youngest priest recipient.

Bishop Gregory J. Hartmayer of Savannah, who nominated him, said from the first time he met him in 2011, “Father Fredy impressed me with his genuineness, his simplicity, his zeal, his enthusiasm, his joy. He seemed to be a man who was really in love with what he was doing.”

Eight years ago, when Father Angel became the pastor, Lauren Salazar was only 8 years old. But looking back, she choked up as she remembered, “When Father Fredy first came here, you knew something was going to change. We were so small, and not so many people came to church. But things have changed for the better.” She added, “Father Fredy has that aspiration to make us grow, to make our religion stronger, to make our religion help people.”

The parish youth group she tries to keep going has been hampered by being “so scattered,” with teens living far from each other, and also by the lack of suitable space for youth activities. “With the new church,” Salazar told Catholic Extension magazine, “I’d like us to have more regular activities and talk about the faith. Hopefully, with the central location and new facilities, we can bring more people to the youth group.”

Within the 90 counties of the Diocese of Savannah, Catholics make up less than 3 percent of the population and in rural areas, the percentage is even lower.

Over the past two decades, the region has seen growth in the number of Latino immigrants, most of whom work in its cotton, pecan and peanut fields or the poultry industry. According to the Pew Hispanic Center, the percentage of Hispanics in the parish’s three counties has risen from 1.7 percent in 1990 to 5.3 percent in 2011, with corresponding growth among the Catholic population.

When he was first appointed pastor in 2007, Father Angel went on a cleaning binge of the far-flung parish’s buildings and properties, and asked his parishioners to help. Many of the communities were struggling and facilities were in poor repair.

But at the verge of burnout, in 2009 he wrote a letter to Bishop Boland. “I got to a point where even the Mass, the celebration of the Eucharist, became empty. It made me sad and frustrated,” he admitted. He knew it wasn’t serving his parish, either: “I told my bishop that I’m getting tired and I’m losing my vocation. We need to do something to unify the churches.”

Since February 2014, when St. Margaret Mary Mission in Adel closed, the parish has been celebrating Mass at two locations: on Sundays at the “mother church” in Lakeland and on Saturdays at the United Methodist church in Ray City, whose congregation generously provides its worship space free of charge.

Thanks to Father Angel’s leadership, parishioners got excited about building a new, larger church. What got the ball rolling was one parishioner’s generous donation of 16 acres of land at a central location near Ray City that would be no more than 20 miles from any of the parish’s four main towns.

Steven Mancuso, the parish’s director of religious education, said, “I wouldn’t be in formation for the permanent diaconate if it wasn’t for Father Angel.” He added, “From the first time we walked in here, it was impressive, because a lot of the South is very divided. For example, you have white Baptist churches and you have black Baptist churches. But we walked in here, and it was pretty well mixed. You had African-American Catholics in here, white Catholics, Latinos, and Asians.”

Many parishioners cite the bilingual Masses and potlucks on the first weekend of each month as key in building bridges between the English- and Spanish-speaking parishioners. The monthly events are important to Father Angel, who works hard to “make it nice” and to encourage his parish. “Share with the people. Be present,” he says he tells his parishioners

“God has sent him to us,” said Juan Salazar, Lauren’s father. “I want to thank him not just for the construction of the new church, but also for the construction of our hearts, which little by little has led to changes in our lives. Father Fredy was the one who planted the mustard seed. I know this seed will bear many fruits, and we are those fruits, all of us who have been coming here.”

Scherer-Emunds is vice president of content for Catholic Extension.

NEXT: House bill holds up federal funds for Planned Parenthood for a year