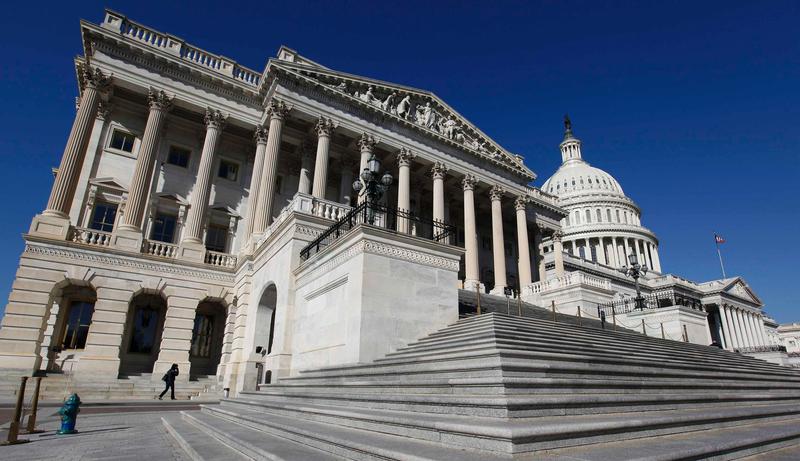 The U.S. Capitol dome is seen behind the entrance to the House of Representatives on Capitol Hill. (CNS photo/Larry Downing, Reuters)

WASHINGTON (CNS) — The U.S. House voted Oct. 23 to block federal funding for a year to affiliates of the Planned Parenthood Federation of America and redirect the money to community health centers.

The provision is part of a reconciliation bill — H.R. 3762 — that voids some major provisions of the Obama administration’s Affordable Care Law.

“Planned Parenthood now commands about one-third of the total abortion ‘market,'” said Carol Tobias, National Right to Life president. “For far too long, federal taxpayer dollars have been funneled to the nation’s abortion giant, and it’s time for that to stop. We applaud passage of the reconciliation bill and we urge the U.S. Senate to act quickly.”

The Senate cannot block the bill with a filibuster, but even if it were to pass, it will face a guaranteed veto by President Barack Obama.

According to its most recent annual report, Planned Parenthood received at least $528 million annually from the federal government and state governments.

The House vote “is an important step forward in ending the massive, unnecessary and immoral funding of Planned Parenthood,” said Father Frank Pavone, national director of Priests for Life. “We in the pro-life movement have to continue to work this process with patience, perseverance and political wisdom, as long as it takes, to defund Planned Parenthood.”

The House has created a new panel to investigate Planned Parenthood, naming Rep. Marsha Blackburn, R-Tennessee as chairwoman and appointed seven other Republican lawmakers to the committee. House Democrats have named no participants.

Calls for defunding Planned Parenthood and investigating the organization followed the release of several videos, taped undercover, that show physicians and others associated with Planned Parenthood describing the harvesting of fetal tissue and body parts during abortions at their clinics.

Also discussed in the videos are what researchers are charged for the tissue and parts.

On Oct. 13, Cecile Richards, president of the Planned Parenthood Federation of America, announced the organization’s clinics will no longer accept reimbursement for fetal tissue procured in abortions and provided to researchers. She said the decision was made “to completely debunk” the series of videos, which were by the Center for Medical Progress.

“Earlier this year, you committed and condoned numerous acts of misconduct captured on video that reveal repeated program violations and breach the minimum standards of care required of a Medicaid enrollee,” the state health commission said in a letter to state Planned Parenthood officials.

In Louisiana, Gov. Bobby Jindal ordered such funding be blocked there but a federal judge in mid-October stopped his order from taking effect and ruled the state had to continue Planned Parenthood funding until he could rule on the case.

NEXT: Irish-born actress Maureen O’Hara dies; was icon of golden age of movies