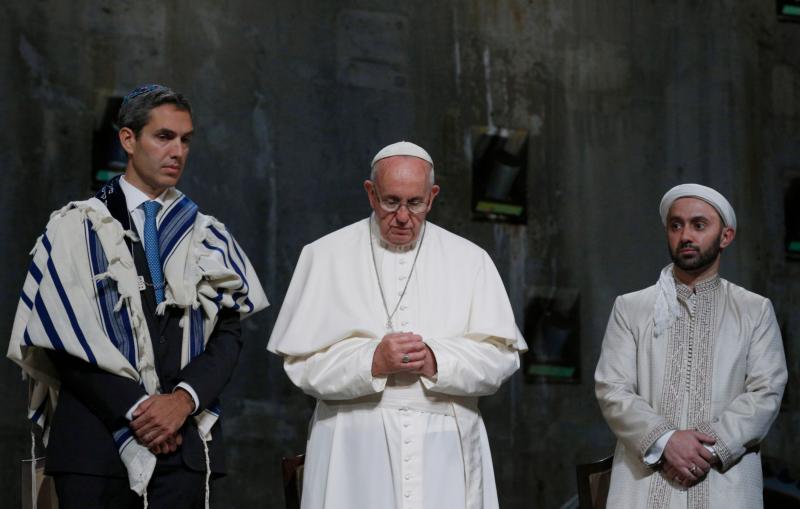 Pope Francis stands between Jewish and Muslim religious leaders during a prayer service at the ground zero 9/11 Memorial Museum in New York Sept. 25. Father John W. Crossin, executive director of the Secretariat for Ecumenical and Interreligious Affairs of the U.S. Conference of Catholic Bishops said, "This event is symbolic and is iconic. It's a healing message." (CNS photo/Paul Haring)

WASHINGTON (CNS) — The scene in Foundation Hall of the National September 11 Memorial and Museum during Pope Francis’ visit spoke volumes about the Catholic Church and interreligious relations.

On the platform with Pope Francis Sept. 25 were representatives of the Hindu, Buddhist, Sikh, Jewish, Muslim religions as well as Christian religions. All equal. All offering prayers for peace and words of inspiration from their sacred texts.

The event symbolized the strengthening relations and solidarity that the Catholic Church has with non-Christian religions as envisioned by “Nostra Aetate” (“In Our Time”), the Vatican II declaration that addressed the relations of the Catholic Church with other religions, said Father John W. Crossin, executive director of the Secretariat for Ecumenical and Interreligious Affairs of the U.S. Conference of Catholic Bishops.

“This event is symbolic and is iconic,” Father Crossin, a member of the Oblates of St. Francis De Sales, summarized in an interview with Catholic News Service. “It’s a healing message.”

Jesuit Father Francis X. Clooney, director of the Center for the Study of World Religions at Harvard Divinity School, attended the ground zero event. He said the pope’s participation served as an example for people of faith to follow.

“At ground zero, the pope was saying given today’s world and the environmental crisis and poverty and terrible scenes of religious violence, all of us across religious traditions, as religious leaders, have to work together,” Father Clooney said. “This is a time for people to work together.”

In the 50 years since “Nostra Aetate” was released on Oct. 28, 1965, each pope since has promoted interreligious understanding in numerous outreach efforts. What was originally proposed by St. John XXIII as a statement related to Jews eventually evolved to encompass non-Christian religions and ended up being a stand-alone message emerging from the Second Vatican Council.

The declaration begins by acknowledging that humanity “is being drawn closer together and the ties between different people are becoming stronger.” In subsequent paragraphs, it specifically addresses Hinduism, Buddhism, Islam and Judaism. The key observation about other faiths comes in paragraph 2, according to retired Archbishop Michael L. Fitzgerald, an expert on Islam, who was president of the Pontifical Council for Interreligious Dialogue from 2002 to 2006.

Specifically the passage reads: “The Catholic Church rejects nothing that is true and holy in these religions. She regards with sincere reverence those ways of conduct and of life, those precepts and teachings, which through different in many aspects from the ones she holds and sets forth, nonetheless often reflect a ray of truth which enlightens all men.”

For Archbishop Fitzgerald, that recognition is what has led the Catholic Church to initiate dialogues to create greater interreligious understanding and respect.

“It’s very strong words,” he told CNS. “It means that there’s truth there. That doesn’t mean that we’ve got all the truth. No, no, not at all. Revelation is complete in Jesus Christ, but the way we live that and other religions can help us to understand the revelation and to understand the truth and the Spirit is working in these.”

Such an understanding is crucial in a rapidly diversifying United States, where the USCCB has been conducted a series of dialogues with several faiths over the years. While relations that promote understanding with the Jews have received much of the attention, U.S. church officials have had regional dialogues with Muslims and smaller scale meetings with Hindus, Buddhists and even Native American leaders.

Today, Catholics live in more diverse settings, mixing with people of different faiths and cultures in the workplace, in schools, in neighborhoods and in social circles.

John Borelli, special assistant to the president for interreligious initiatives at Georgetown University, attributed the country’s growing diversity to the Immigration and Nationality Act of 1965. President Lyndon Johnson signed the act three months before “Nostra Aetate” was promulgated.

The law is significant because it ended an immigration system that gave European immigrants preference and has changed the face of the United States.

Over the years, numerous efforts have been undertaken nationally to institute the values expressed in the Vatican II declaration. Borelli, who formerly worked in the USCCB ecumenical and interreligious affairs office, joined with numerous academic, diocesan and Catholic and non-Catholic religious partners to spearhead efforts to build understanding and respect.

In recent years, such efforts have been dialed back somewhat, especially at the local diocesan level as bishops have emphasized rebuilding the church and evangelization in the face of dwindling Mass attendance and the need to close and consolidate parishes in many locales because of declining membership.

However, Borelli said Pope Francis is paving the way for more outreach.

“Francis is one who feels you don’t need to just keep repeating the old ways. You’ve got to incorporate the practice in a personal and spiritual way,” Borelli explained.

So while the outreach efforts continue at the top from the USCCB and other official church organizations in Europe, Canada and elsewhere, Borelli finds inspiration in efforts at parishes and local communities that are carrying out the vision of “Nostra Aetate.”

Father Clooney, an expert in Hinduism, said that in India the Catholic Church has worked to understand the country’s majority religion and integrate culture into Catholic life for centuries, and has been guided by “Nostra Aetate” more recently. From modes of dress to establishing an ashram, a spiritual hermitage for Hindus, Catholic clergy and woman religious have acted as Christian witnesses rather than focus exclusively on converting people to the Catholic faith.

In the U.S., such efforts have led to various dialogues and programs in which Catholics and Hindus are exploring each other’s faith. Cardinal Jean-Louis Tauran, president of the Pontifical Council for Interreligious Dialogue, participated in a program at a Hindu temple in Northern Virginia in May while he was in Washington for a program marking the “Nostra Aetate” anniversary at The Catholic University of America.

Philip Cunningham, co-director of the Institute of Jewish-Catholic Relations of St. Joseph’s University in Philadelphia, told CNS that lectures and classes help students and the wider community appreciate their own faith more because they are learning about other religions.

“The possibility of Jews and Catholics learning about God together is far more exciting and has the greatest long-term consequence,” Cunningham said.

Pope Francis briefly stopped at the university during his visit to Philadelphia in September to bless a sculpture commemorating “Nostra Aetate.” Jewish leaders were on hand as well. The pope’s stop affirmed that such efforts are in line with his vision of the church engaging the world.

At Seton Hall University, Father Lawrence Frizzell, director of the 62-year-old Institute for Judeo-Christian Studies, said the many efforts to build understanding and respect between Catholicism and Judaism can serve as a model for relations between the church and other non-Christian religions.

He suggested that such efforts can build on each community’s unique culture, tradition and qualities.

“We don’t want people to think they’re going to be absorbed into an amorphous kind of mass (because of dialogue),” Father Frizzell said. “It’s more the idea of a mosaic. Each group is preserving its values and contributing from the roots they have to the good of the whole.”

Barbara A. McGraw, founder and director of the Center for Engaged Religious Pluralism at St. Mary’s College of California, said that programs that explore interreligious understanding have helped students come to better understand their own faith traditions and help solve some of the challenges stemming from religious differences around the world.

“Students may not pay attention as much to the news, but they are aware that religion can be a source of conflict or an opportunity for cooperation. Having an understanding for what is going on in the world and trying to find a different way to engage on the issues is critical for them and the future of our country,” McGraw told CNS.

“They’re seeing the challenge in conflicts around the world and for them to learn that there is this engagement coming in all kinds of (religious) communities across the country gives them a hopeful picture of what could be if more of that is done,” she added.

At Seattle University, Catherine Punsalan-Manlimos, director of the Institute for Catholic Thought and Culture, said students are pleased to learn about the various dialogues taking place and that invitations to conversations come from all parties and are not solely the initiative of the Catholic Church.

“When students begin to see that, they begin to break out of very narrow religious understanding and see how religions are engaging in the world,” she said.

St. Joseph’s Cunningham said he hopes the 50th anniversary of “Nostra Aetate” serves to “re-energize and recommit ourselves to this venture” building interreligious relations.

“One thing that we see more and more of is a spirit of genuine humility,” Cunningham said. “Once you have a visceral encounter in another religious tradition, it becomes more obvious that we all pale in significance to God.

“I think that religious communities and, speaking for myself as a Christian, there’s a tendency to think we’ve got it all figured out and we’ve got the fullness of truth. We have to remember God is bigger than our ability to conceive of God, and interreligious relations bring that out.”