Pennsylvania priest builds ministry one Lego at a time 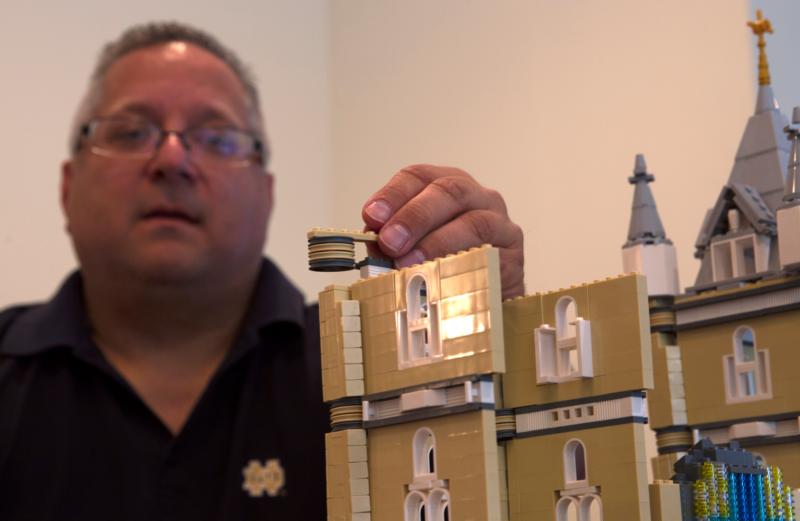 Father Bob Simon, pastor of St. Catherine of Siena Parish in Moscow, Pa., places a Lego piece on a model church he is building in a spare room in his rectory Oct. 24. Father Simon says his Lego-building hobby has served as an evangelization tool. (CNS photo/Chaz Muth)

MOSCOW, Pa. (CNS) — Bob Simon fell in love with two things at the age of 5 — the Catholic Church and building with Lego.

Now, as a 51-year-old priest, Father Simon has discovered a way to merge both of these passions.

The pastor of St. Catherine of Siena Parish in Moscow finds that his Lego-building hobby not only provides him with a diversion from his ministry at a busy parish, but that it enriches his prayer life and offers him a tool for evangelization on a large stage.

Father Simon’s 14-by-6-foot self-described “Lego Vatican” is a featured display at the Franklin Institute Science Museum in Philadelphia as part of its “Vatican Splendors” exhibit, which opened Sept. 19 in time for Pope Francis’ visit to the city and will close Feb. 15.

“It’s a thrill,” he told Catholic News Service at the well-known museum in late October, as he inspected his Lego Vatican and made sure all of the pieces were in place. “Never thought I would have something (I created) in a museum … and certainly never thought that my little Lego project that I did in an empty room in the rectory would attract a lot of attention from a lot of people.”

Before he could finish his sentence, a group of Catholic school students touring the museum stopped him and began to ask questions about his creation.

“Wow, did you really build this with Legos all by yourself?” one girl asked, followed by boy asking how long it took to complete the Lego rendition of St. Peter’s Basilica?

“It took me 10 months to complete,” Father Simon told the growing crowd of people who were by then his captive audience.

The questions then shifted from the Lego construction and artistry to theology, Catholic history and the role Pope Francis plays on the world stage.

“It’s really interesting how this project has brought so much attention to the church,” he said after his audience moved on to the next exhibit. “It’s kind of serving as an unintended evangelization tool. My love of Lego wasn’t planned for that purpose, but it makes me happy that it gets people excited about the faith.” 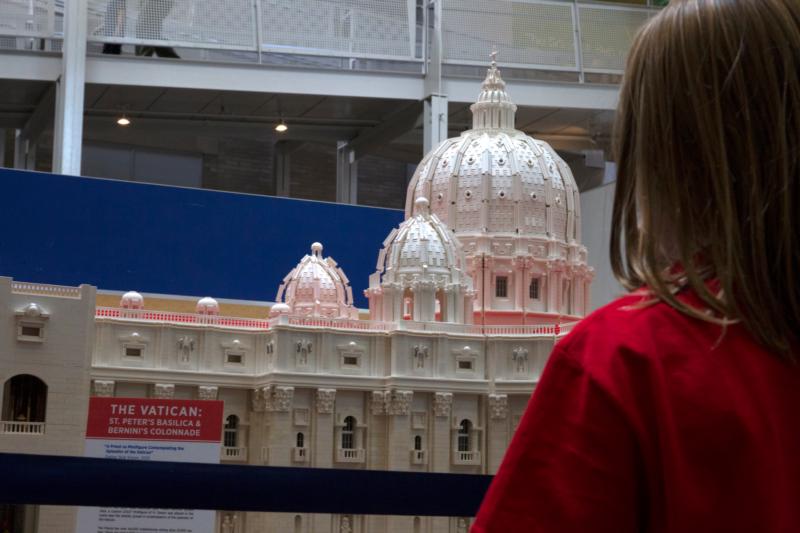 The Lego Vatican actually wasn’t built as a museum exhibit, but as a piece for a Lego show in the summer of 2015.

Word about the elaborately detailed Lego replica of St. Peter’s Basilica reached curators at the Franklin Institute, who asked to show it during their special Vatican showcase in honor of the pope’s first U.S. visit.

That’s led to interviews and stories from national media outlets and the American public has learned a little more about the humble priest from the Diocese of Scranton and his fascination with the colorful building blocks often associated with children.

“When the interview requests started coming in, I was worried that I was going to be portrayed as some kind of weirdo who plays with kids toys,” Father Simon said, “but so far the coverage has been very respectful and its being look at as a positive thing.”

As a 5-year-old boy, he pretended to be a priest, donning a cassock made by his mother, and his resolve to become a man of the cloth continued through his time at Bishop Hoban High School in Wilkes-Barre.

He entered seminary at the University of Scranton following his high school graduation, finished up as a seminarian at Seton Hall University in South Orange, New Jersey, and was ordained a priest in 1990.

Eight years ago, Father Simon was named pastor of St. Catherine of Siena Parish in the sleepy town of Moscow in Pennsylvania’s Pocono Mountains, a parish with a large and active community.

He discovered that he needed a hobby to cope with the hectic calendar and at first picked up painting, but found that the setup and cleanup wasn’t well matched with the short sessions his schedule often allowed.

That’s when the Lego boxes started to be moved out of storage and into a spare room in the rectory.

Father Simon opened that room up for a CNS photographer and reporter to see during a Saturday afternoon interview in late October. It’s filled with assorted Lego blocks, kit boxes, small-completed Lego projects and the beginnings of a Lego church that he plans to use in his Christmas display this year.

“It’s something I found I could do at 9 o’clock at night when all of the appointments and meetings are over at the end of the day,” he said. “It’s something I can do for an hour or two or simply for a half an hour. It’s something that isn’t that hard to get back to when the telephone rings or if I’m called out to the hospital.”

The act of Lego-building has also become a prayerful experience, Father Simon said, because like prayer beads or rosaries, the assembly keeps his hands busy so his mind and spirit can be elsewhere.

The 10 months it took him to build his Lego Vatican offered him ample time for contemplation about his faith and ministry.

It also peaked the curiosity of his parishioners, fellow clergy and even his bishop, all of whom frequently stopped by the rectory to check out the Lego-building progress.

While many seemed surprised the priest had taken on such an ambitious project, his mother saw it as a natural fit for her son.

“She said, ‘You built a replica of St. Peter’s Basilica as a boy, so of course you’ll do it again now,'” Father Simon said. “It was a no-brainer for her.”

Later that Saturday evening following Mass, a group of parishioners asked the priest what his next big Lego project will be.

With a deadpan expression, he said that information was top secret. Moments later — with a broad smile on his face — he confessed a desire to build a Lego replica of the Sistine Chapel.