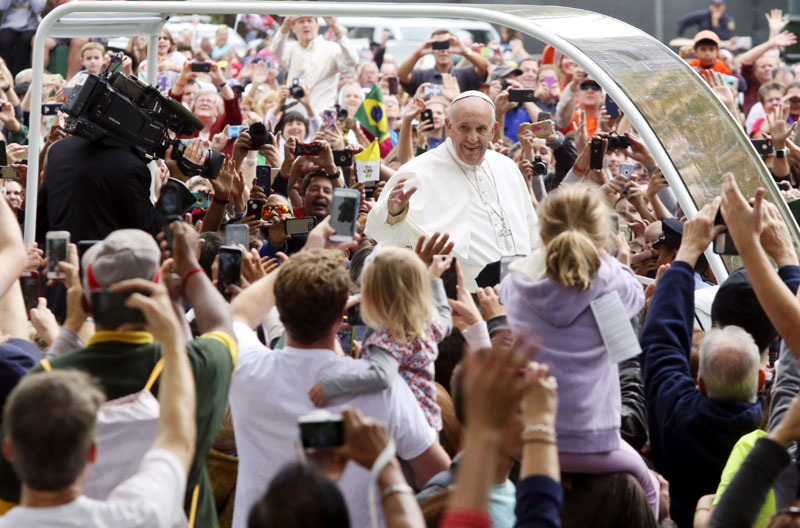 NEW HAVEN, Conn. (CNS) — A Marist Poll survey commissioned by the Knights of Columbus found Pope Francis’ favorability made significant gains among Catholics and among Americans overall in the wake of his Sept. 22-27 visit to the United States.

Among practicing Catholics, 90 percent now say they view Pope Francis favorably, up from 83 percent in August, one month before his visit. Among all Americans, the pope’s numbers jumped from 58 percent to 74 percent.

Asked if they are clear about Pope Francis’ vision for the church, 55 percent of Americans said yes, up from 43 percent, and 88 percent of practicing Catholics said the same, up from 73 percent.

Fifty-six percent of Americans said they now feel better about their own faith because of his visit, including 86 percent of practicing Catholics.

Another survey finding showed that 58 percent of Americans, and 82 percent of practicing Catholics, are more likely to engage in charitable activity as a result of Pope Francis’ trip.

“The data clearly show that Pope Francis’ trip to the United States was a success by any measure,” said an Oct. 16 statement by Carl Anderson, supreme knight of the Knights of Columbus. “Not only is the pope viewed more favorably on the heels of the trip, but Americans also feel he made a real difference in their own lives — motivating them to become more involved in charitable activity, and making them feel better about their own faith.”

The Marist Poll is a service of the Marist Institute for Public Opinion, which operates out of Marist College in Poughkeepsie, New York.

During the papal trip, the Knights of Columbus contributed funding and volunteers and covered printing costs for the 350,000 programs used at the Sept. 27 Mass that the pope celebrated to close the World Meeting of Families in Philadelphia.

The 24-page program, printed on recycled paper, was designed as a keepsake for Massgoers, according to the Knights. It included the prayers, readings and music for the Mass — with portions printed in English, Greek, Latin, Spanish and Vietnamese. On the cover was an image of the Holy Family commissioned for the world meeting.

The Knights also printed prayer cards and booklets related to the Sept. 23 canonization of St. Junipero Serra at an outdoor Mass Pope Francis celebrated on the grounds of the Basilica of the National Shrine of the Immaculate Conception and the adjacent campus of The Catholic University of America.

PREVIOUS: No human being ‘can be reduced to a problem,’ Archbishop Wenski says