No human being ‘can be reduced to a problem,’ Archbishop Wenski says 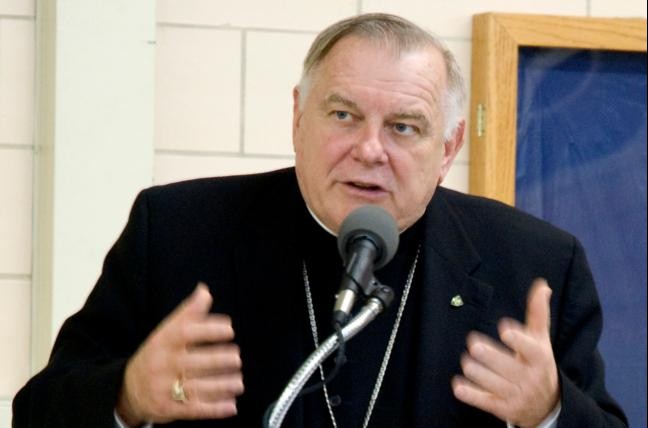 EVANSVILLE, Ind. (CNS) — Archbishop Thomas G. Wenski of Miami cut to the chase about halfway through his Oct. 8 keynote at a Respect Life celebration sponsored by the Diocese of Evansville.

“The story of the Holy Family is instructive,” said Archbishop Wenski, who devoted his remarks to migration and immigration. “Joseph took the child and fled with Mary to Egypt.

“Jesus was a refugee. And you can be sure that Joseph did not waste any time trying to get a visa to go into Egypt. So Jesus was just as illegal as the illegals we hear about on our talk show programs we love to listen to.”

Earlier in the day, during a news conference with Evansville Bishop Charles C. Thompson, the chair of the U.S. Conference of Catholic Bishops’ Committee on Domestic Justice and Human Development minced no words when describing long-standing church teaching on human dignity.

“No human being … can be reduced to a problem,” Archbishop Wenski said in the offices of Catholic Charities — and again during his keynote at Nativity Church, which hosted two talks by the prelate. He spoke about immigration at both the diocese’s Spanish-language Respect Life celebration Oct. 7 and the English-language celebration the following day.

“Just as we can call Jesus the King of Kings, we also can rightly refer to him as the Migrant of Migrants,” Archbishop Wenski told a large crowd in Nativity’s parish hall Oct. 8. “In becoming a man like us, Jesus migrated from heaven. He became a citizen of our world so that we, in turn, might become citizens of the world to come. And those who will enter into his heavenly homeland will do so because, as he himself will tell us, ‘I was a stranger and you welcomed me.’

“In this way,” he added, “perhaps we can contemplate the image of Jesus in the visage of the immigrant.”

Archbishop Wenski, who also serves on the U.S. bishops’ migration committee, opened his remarks by focusing on the nature of laws — and what Jesus had to say about them.

“To those who accused Jesus of breaking the laws of his day, he replied, ‘The Sabbath was made for man, not man for the Sabbath,'” said the archbishop, adding that “when laws fail to advance the common good, they can and they should be changed. Laws that fail to advance the common good are bad laws … unjust laws. Our immigration laws need to be changed. They are antiquated and inadequate for the promotion and regulation of social and economic relations in 21st-century America.”

He emphasized the church will — and must — continue to speak out on behalf of migrants everywhere. “(Catholics) must model to the rest of the world what a reconciled world looks like. We have to show that diversity enriches the church. … Language doesn’t divide us; diversity doesn’t divide us. What divides us is sin; everything else should enrich us.

“As Jesus reminded the embittered zealots of his day,” Archbishop Wenski added, “laws are designed for the benefit — not the harm — of humankind. Of course, we have to listen better to Matthew, Mark, Luke and John, and pay a little less attention to Sean (Hannity), Rush (Limbaugh), Don (Imus) and whoever else is talking.”

At the news conference, Bishop Thompson said, “We have about 20,000 Latinos in our diocese, and it is very key for us to provide outreach to them as church, as people who embrace all cultures in our church.”

Archbishop Wenski referred to immigration reform as the “unfinished business of our Congress.” “The immigrant is not a problem,” he said. “He might be a stranger — but a stranger that should be embraced as a brother or sister.”

Archbishop Wenski added, “Sometimes people will come up to me and say, ‘Well, what part of illegal don’t you understand?’ I would say that instead of describing them as breaking the law, it’s better to say that they are being broken by the law. The law is inadequate and antiquated, and (as a result) it is unjust.

“Our country has been able to honor lawbreakers. We honored the lawbreakers of the Boston Tea Party,” he continued. “We honor the lawbreaking of Rosa Parks, who refused to give up her seat to a white person on a bus.

“A country that can recognize those people for breaking those laws can somehow come to a resolution of the present inadequate system of our immigration laws that leave too many people excluded. Pope Francis talks about the culture of exclusion,” Archbishop Wenski added, “the throwaway culture … and we cannot allow ourselves to throw away these people.”

Lilley is editor of The Message, newspaper of the Diocese of Evansville.