‘You see the benefits everywhere’ from chaplains, says documentarian 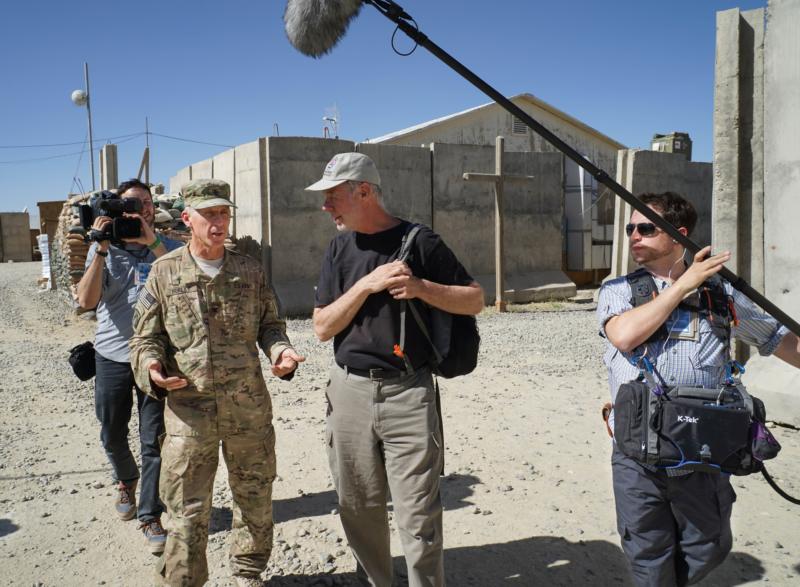 WASHINGTON (CNS) — Martin Doblmeier, the writer-director behind the new public television documentary “Chaplains,” said chaplains in hospital, prison and corporate settings are worried about how their service is judged.

But “you see the benefits everywhere,” Doblmeier said.

He should know, as his two-hour documentary goes into the worlds of hospital, corporate and prison chaplaincy, as well as the milieus of the military, police, nursing homes and even NASCAR drivers.

“We proposed it for two hours, and public television liked it. They thought there was enough material, and it’s serious enough to go and do it,” Doblmeier said in an Oct. 12 telephone interview with Catholic News Service.

“It’s the kind of film which I prefer to do, to take your faith out into the real world.”

“Chaplains” opens with military service in one of the most difficult places to serve: Afghanistan. There, Father Paul Hurley, as senior chaplain for U.S. forces stationed there, is profiled, even as he reminds his fellow chaplains, regardless of their religion, to take enough time for themselves so they can serve in a high-stress situation.

“You’re out there, you’re with the soldiers, wherever they are,” said Father Hurley in the film. A priest of the Archdiocese of Boston, he was confirmed in March as chief of chaplains for the Army, promoted to major general and installed in his new post in May, and transferred to the Pentagon.

“Some of these guys have been there for 13 years” as chaplains in those places, Doblmeier told CNS.

Among other Catholic chaplains featured in the documentary is Jesuit Father Pat Conroy, chaplain for the House of Representatives, whose dream as a young man was to be elected to Congress. “My life went a different way,” he said in the film, adding it was the wish of outgoing House Speaker John Boehner, R-Ohio, himself a Catholic, to have a Jesuit in the role.

“My even being a candidate here had nothing to do with me personally. It had to do with me being a Jesuit. I was assigned by my superior,” Father Conroy said. “As they say here, I had the votes.”

While some “take umbrage” at the notion of clergy serving as chaplains in a government role given the First Amendment’s separation of church and state, Father Conroy said, he sees it differently: “If a man or woman is called away from home where they would normally exercise their religion in service to this country, they (chaplains) should be provided to meet the needs where they are.”

“Chaplains” also examines the service of Margarita Roque, a Catholic chaplain at the Children’s National Medical Center in Washington. “You have to gain their trust,” she says in the film of the young patients and their parents. “That’s the first step.”

The film follows Roque as she attends to a family whose infant son needs a bone-marrow transplant, and whose 5-year-old daughter is a match. “The prognosis is good,” she tells the parents before the procedure. “It does not mean the process is not risky.” Afterward, both “Baby Edward” and his big sister Brisa are happy and healthy.

“Chaplains” also goes to Hamtramck, Michigan, a small city surrounded by Detroit that St. John Paul II visited in 1987. Doblmeier was working on presentations during that papal trip, so he said he has “a sense of the madness that goes on” in conjunction with such a trip.

Then, St. John Paul visited Polonia — the Polish diaspora — in what was then a heavily Polish Catholic town. Today, Hamtramck is half Muslim, with half of those Muslims being born outside the United States. Twenty languages are spoken by students at the city’s high school.

Doblmeier filmed a volunteer Muslim chaplain doing ride-alongs with a Hamtramck police officer. In his travels, the chaplain admits to surprise that not all police officers have it in for Muslims as other Muslims have told him, and that some Muslims break the law and fail to follow police orders. He also consoles the neighbors of an elderly Hamtramck woman found dead in her bed.

Other segments of “Chaplains” focus on the chaplaincy program at Tyson Foods, which employs 120 chaplains to give pastoral care to its employees at plants worldwide, and Oregon’s statewide prison chaplaincy program, which has a Buddhist woman, Karuna Thompson, offering outreach to male inmates at a maximum security prison. “She believes we can be better people even though we are in prison,” one of the prisoners says. She may be right; Oregon’s recidivism rate is 24 percent, far lower than the national rate of 43 percent.

Doblmeier, president and founder of Journey Films in Alexandria, Virginia, said he encountered two surprises when preparing to film “Chaplains.”

“The response to (a request to) be in the film from chaplains was almost universally positive. Not so with the institutions in which they work,” he said, primarily because of issues of privacy, security and institutional responsibility. The second, almost contradictory, surprise was that, once officials were asked for permission, he added, “they were surprised that we were doing it, and they were grateful that it was being done.”

“Chaplains” is being scheduled by individual public TV stations, but Doblmeier told PBS that it should be available to 95 percent of the U.S. population sometime in the fall.

PREVIOUS: Nebraska bishop asks for prayers for burglar who stole his pectoral cross

NEXT: Catholics urged to join campaign of prayer and fasting Oct. 16-24