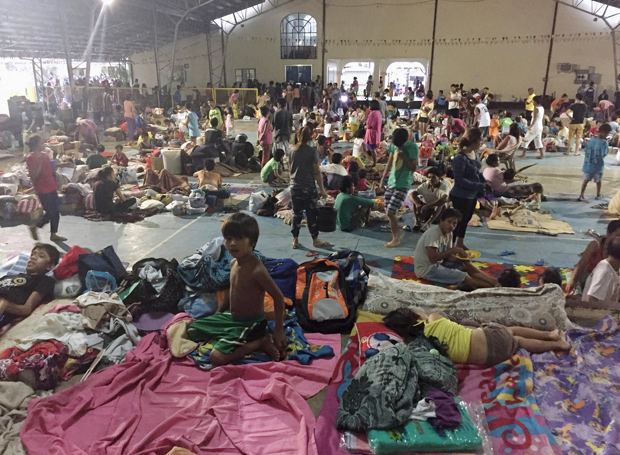 Residents stay at a Manila public school being used as a temporary shelter Oct. 19, after Typhoon Koppu swept across the northern Philippines. (CNS photo/Jay Enero, Reuters) 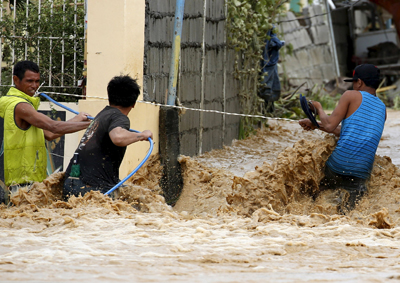 Residents hold on to a plastic hose and an electrical wire Oct. 19 while trying to cross a flooded road amid a strong current after Typhoon Koppu hit the Philippine province of Nueva Ecija. (CNS photo/Erik De Castro, Reuters)

MANILA, Philippines (CNS) — Catholic relief workers were on their way to a typhoon-stricken portion of the northern Philippines, including an area from which there had been no communication.

Catholic Relief Services country director Joe Curry said teams from his agency and Caritas Philippines were making their way to at least three provinces in central and eastern Luzon, where much of the damaging floods have been reported.

“Our biggest concern is what we’re not hearing from certain areas where the storm had the biggest impact, especially in northern parts of Aurora province,” Curry told Catholic News Service Oct. 19. “This is where the storm sat for about four hours before it made landfall.”

Curry told CNS his office had not heard anything from that part of the province because communication lines were down and roads into those towns were blocked.

Typhoon Koppu made landfall Oct. 18 on the eastern coast of Luzon, the country’s main island in the North, packing 108 mile-per-hour winds that toppled power lines and trees and blew off roofs. Its pounding rains caused chest-high flooding in some areas, while swollen rivers overflowed and forced some residents to their rooftops.

Government officials confirmed three deaths by late Oct. 19. The civil defense office said more than 280,000 people were affected by the storm. About 70,000 were in evacuation centers.

Koppu, with cloud coverage spanning 375 miles, moved westward slowly and was expected to continue dumping more rain over much of Luzon. 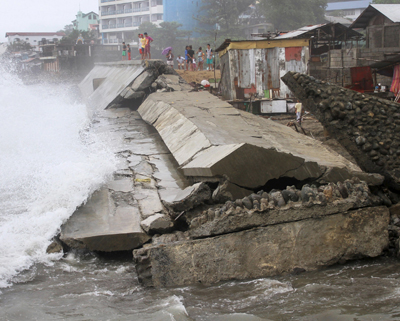 “Those are areas around the Pampanga River, which is now flooding, and the flooding will continue because the rain is still coming through,” he said.

In mountain towns, rescue workers towing residents with rope maneuvered rolling currents of brown muddy water that had poured down the mountainsides.

Curry said his office has been in touch with dioceses in central Luzon, but it could not make contact with any churches or the diocese on the east.

In Isabela and Cagayan provinces, the International Federation of Red Cross and Red Crescent Societies said residents who vacated their homes took to the streets when evacuation centers in their towns became overcrowded. It said the Philippine Red Cross served about 4,100 meals and setting up support services for the displaced.

While Koppu moved northwest at 3 miles per hour, the head of the state weather bureau said some parts on the west could expect half a month’s worth of rain in a 24-hour period.

“There are so many villages on deep slopes in mountains and in valleys near rivers that are very vulnerable to landslides and flooding, so that’s what we want to watch out for in the next couple of days,” Curry said. 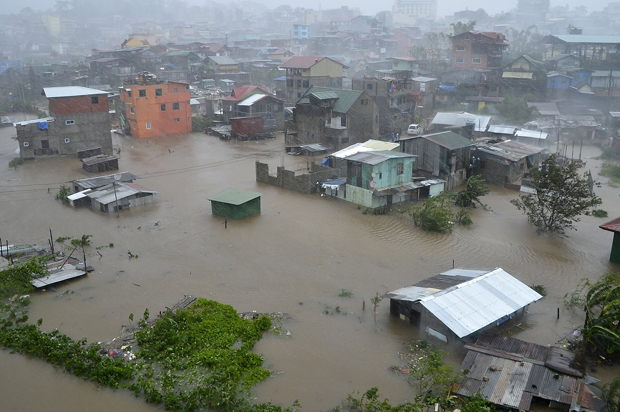 NEXT: Archbishop Chaput: In Philadelphia and in synod, support for Francis is obvious