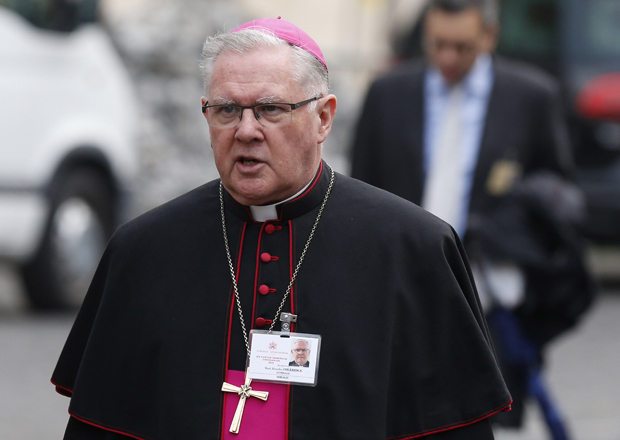 Archbishop Mark Coleridge of Brisbane, Australia, arrives for a session of the Synod of Bishops on the family at the Vatican Oct. 14. (CNS photo/Paul Haring)

VATICAN CITY (CNS) — While church doctrine must stay unchanged, an Australian archbishop expressed his hope that the Synod of Bishops will the lead the church to a genuine pastoral approach using a new language of mercy toward families, particularly those in difficult situations.

Speaking at a Vatican news conference Oct. 19, Archbishop Mark Coleridge of Brisbane said he was concerned that an “all-or-nothing” approach tended to dominate discussions before and, at times, during the synod. Between that approach, he said, there exists a “vast territory that calls us to a new kind of pastoral creativity.”

The Australian archbishop, along with Latin Patriarch Fouad Twal of Jerusalem and Italian Bishop Enrico Solmi of Parma, spoke following the morning session of the synod’s small working groups.

On the issue of divorced and civilly remarried Catholics, the prelates said that while the church’s doctrine is clear that they cannot receive Communion, it remains a delicate subject that cannot always be generalized and must be seen in a case-by-case basis.

“In the case of divorce and remarriage, we’re always dealing with sin, there’s no news in saying that; the church has traditionally spoken of the second union as adulterous,” Archbishop Coleridge said. “But at the same time, not every case is the same, and that is where a pastoral approach needs to take account of the difference from situation to situation.”

The archbishop said a couple in a second union that is “enduring and stable and loving” is not the same “as a couple skulking off to a hotel room for a wicked weekend.”

He said the term “‘adulterous’ is perhaps too sweeping,” and that while defining the sin is “important, but in another sense it doesn’t say enough. And I think what a pastoral approach requires is that we actually enter into what the synod is calling a genuine pastoral dialogue or discernment with these couples.”

Archbishop Coleridge emphasized that the ministry toward families in irregular unions requires “a genuine pastoral dialogue of discernment,” which begins with bishops listening to them. While the framework and direction of this dialogue is church teaching, the archbishop said that the church is also called to reach out to those who feel alienated.

“What really worries me as a pastor is that a lot of these people don’t come to me or the church,” he said. “They are seriously alienated and feel seriously excluded. So the question is not what do we do when they come to us but how can I/we go to them and begin that process of dialogue that starts with a kind of listening.”

The archbishop expressed his hope that “the teaching of the church in these areas will remain intact” and that a genuinely new pastoral approach with a whole new language, particularly for those who no longer understand the distinction of “hate the sin, love the sinner,” is needed. The shifts in today’s culture, he said, create major problems in communication.

“A pastoral approach is relentlessly geared to the facts. Otherwise we indulge in this discourse, which is beautiful in itself, self-contained, but does not put down roots in the soil of human experience,” he said.

The archbishop said one of the questions that he and the members of the synod are trying to answer is if there is another way of explaining the church’s doctrine, particularly on the indissolubility of marriage and the distinction of homosexuality as “intrinsically disordered.”

While acknowledging that those two examples are understood perfectly once one knows their background, the reality is that most people “haven’t got a clue what the background is” and that those in today’s culture who identify themselves through their sexuality often feel alienated and excluded.

Archbishop Coleridge downplayed media speculation of a substantial change in church doctrine regarding such issues as Communion for divorced and civilly remarried Catholics, homosexuality or cohabitation, affirming that on the basis of the discussions of the working groups and interventions, “there is no groundswell of support for the change of church teaching.”

PREVIOUS: Catholics in Jerusalem praying, and hoping, for peace

NEXT: Aid workers assess areas hit by typhoon as Philippines gets more rain