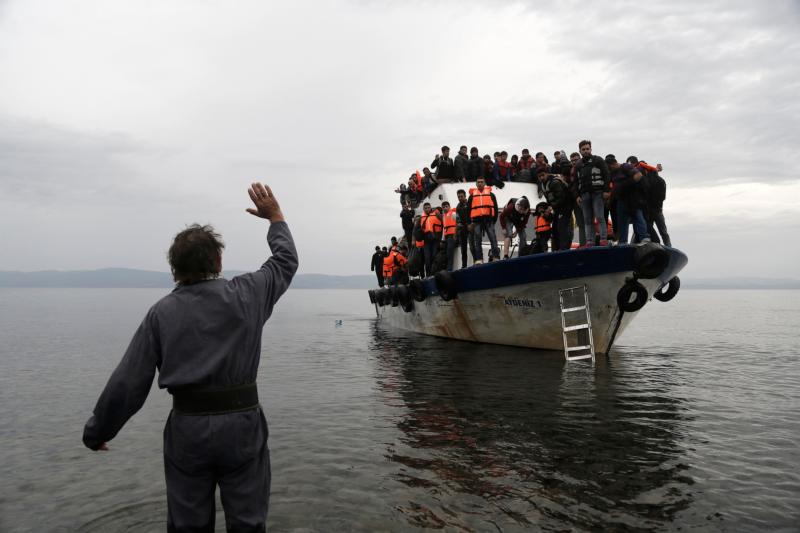 A resident waves to an overcrowded fishing boat carrying migrants after they arrived on the Greek island of Lesbos Oct. 11 after crossing the Aegean sea from Turkey. (CNS photo/Yannis Kolesidis, EPA)

LESBOS, Greece (CNS) — Greece is bracing for thousands more Syrians and other people to land on Lesbos and other key island crossings from Turkey, as those fleeing conflict remain undeterred by the worsening weather and colder autumn temperatures in their desperate search for safety in Europe.

“The waves were rolling fiercely with the salt water nearly choking us,” said Syrian Um Tariq, who identified herself using the familial Arabic nickname, meaning mother of Tariq, her eldest son. “We thought we were going to die.”

“The trip, meant to be a half-hour long, was a painful three hours in a tightly packed dinghy we feared would overturn,” she told the Catholic News Service of the sea voyage from Turkey to this Greek island, better known in the past for its olive oil and ouzo.

Women cried out in panic and men shouted, desperately holding onto their babies and young children, appealing for assistance from the volunteers gathered on shore to help them land. Among the relief groups that help those coming ashore are the international Catholic Caritas organization, the interdenominational OM Greece, EuroRelief and A Drop in the Sea.

Um Tariq recounted what pushed her family of four from Hama, Syria, to make such a dangerous trip.

“The Syrian regime arrested and jailed my eldest son some time ago. We haven’t heard about him since. My husband and I escaped with another son and his wife. We were afraid that the Syrian army would conscript my son because it has lost so many men in four-and-a-half years of fighting,” she said.

“If he refused to join the army, they could kill him,” said the woman, who wore a black headscarf. The family hopes to join another son who is now sheltering in Norway. 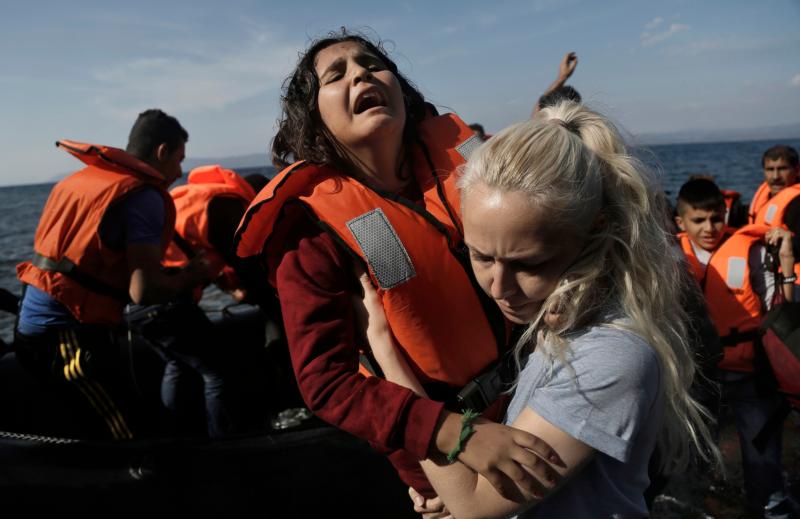 A Syrian girl reacts as she helped by a volunteer upon her Oct. 9 arrival from Turkey to the Greek island of Lesbos. (CNS photo/Yannis Kolesidis, EPA)

And so the tide of humanity fleeing violence in Syria, Afghanistan and Iraq continues into Greece, a key entry point to Europe. Some 169 people reportedly drowned crossing the Aegean Sea in September; 44 of them were children. As the seas become more violent as colder autumn weather sets in, aid workers fear the conditions will only worsen.

In one week in early October, 7,000 people a day came ashore in Greece, said the International Organization for Migration. Recently, a 1-year-old was found dead on a boat after it partially capsized.

After Syrians, Afghans are the chief nationality among the nearly half-million people who have landed on Greek shores from Turkey this year, marking a tenfold increase from 2014.

“We help them to get out of the water to get safely onto land,” said Hein van der Merwe of OM Greece.

“As soon as the refugees see they get closer to land, they just jump into the water. Sometimes they put themselves at risk doing this,” he said. Afterward, they are given towels and dry clothes and something to eat and drink.

“We give them information about the 44-mile trek to the camp for registration and where they can catch buses,” van der Merwe told Catholic News Service.

Sleeping bags, snacks and mats are given to those arriving on the islands of Lesbos, Kos and Chios. Caritas also provides toilets and showers for their use, she told CNS.

“The situation is changing all the time,” Karastamati said, expressing concern. Although the European Union plans to set up so-called “hotspots” where people will be registered, fingerprinted and sorted to be ready in Greece and Italy by the end of November, she said groups aiding the migrants, such as Caritas, have been given no information on the measure.

Karastamati and other relief workers are also worried about proposals to make one single camp on Lesbos to house all the migrants and refugees.

“We are very concerned because if they put all people together, Syrians with Afghans, they can create a lot of problems,” she said, noting people tend to jockey for priority position. 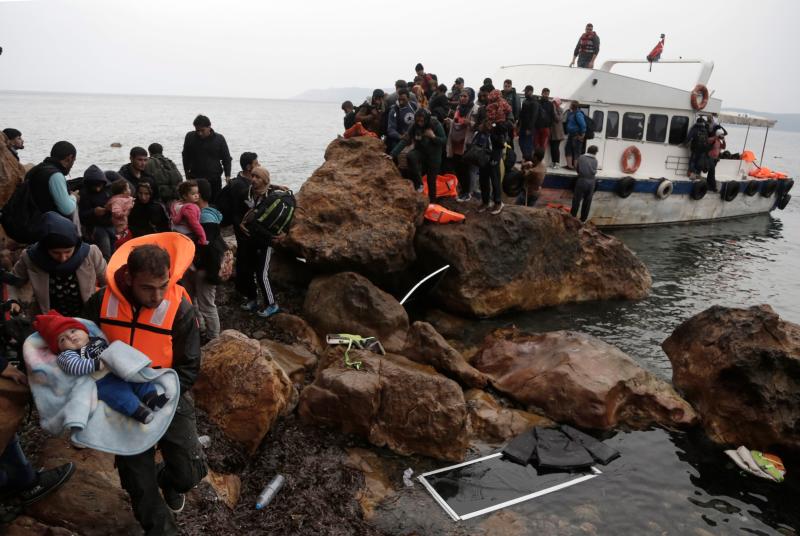 Migrants from Syria arrive on the Greek island of Lesbos Oct. 11 on an overcrowded fishing boat after crossing the Aegean sea from Turkey. (CNS photo/Yannis Kolesidis, EPA)

The European Union has approved a plan to spread 160,000 migrants, mostly Syrians and Eritreans, across its 28 member states in order to tackle the continent’s worst migration crisis since World War II.

“But there is no information at this time about what the Greek authorities in cooperation with the European Union want to do,” Karastamati added.

A European Union official said a group of Syrian refugees, the first to be officially reassigned from Greece, was due to be relocated from Greece to Luxembourg under the EU plan around Oct. 18.

However, most migrants make the trek from Greece to their desired countries of destination, such as Germany and Sweden, on their own and by their own financial means.

Meanwhile, the cash-strapped Greek government, struggling to provide for its own citizens, has been turning some former Olympic facilities in Athens into shelters for mainly Afghan migrants and others with longer stays as autumn’s rains have forced them out of the capital’s parks.

However, the government and local authorities often depend once again on international nongovernmental organizations, like Caritas and OM Greece, as well as local churches to give out food, clothing and other items to the migrants.

Catholics in Greece are a minority, numbering only about 200,000-300,000; the predominant faith is Orthodox. For this reason, Caritas depends on its branches in Europe, North and South America for donations to enable it to reach out to the refugees and impoverished Greeks alike with humanitarian aid.

Recently, a Caritas volunteer in Germany was able to track down two missing Afghan children separated from their family still sheltering in Athens. The volunteer had met the family in one of Caritas’ soup kitchens during a visit to Athens.

“She felt immensely moved by the Afghan mother’s sadness and desperation over not being able to be with her children,” Karastamati explained. “But when she returned to Germany, she could not think anything else than finding the children.”

The Caritas volunteer located the teenagers in a northern German hospital, where they were admitted for a short time due to trauma from their migration and separation from their parents.

“The family’s application for family reunification has just been accepted, and they are expected to fly to northern Germany in early November,” Karastamati said. “As you can imagine, they are extremely full of hope and happiness with this news.”

NEXT: The challenge of walking together: Letter raises concern at synod