The challenge of walking together: Letter raises concern at synod 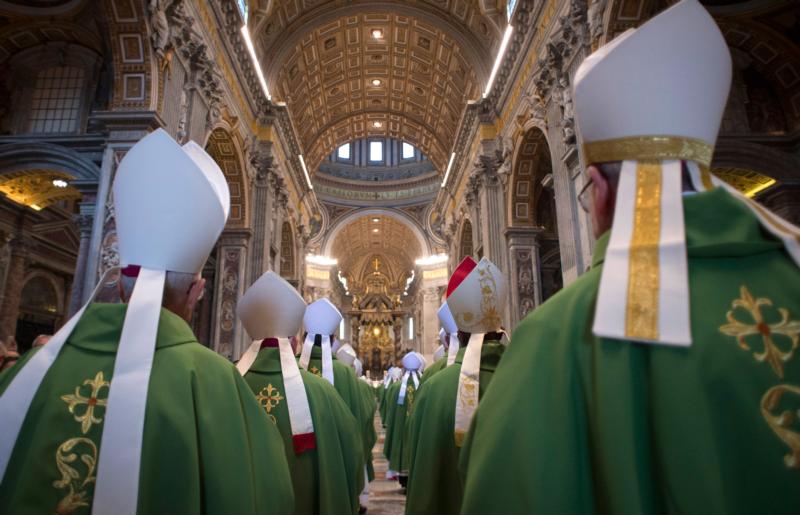 Bishops arrive in procession for the opening Mass of the Synod of Bishops on the family in St. Peter's Basilica at the Vatican Oct. 4. (CNS photo/L'Osservatore Romano, handout)

VATICAN CITY (CNS) — From newspaper headlines and social media comments Oct. 12 it seemed there was a family feud going on inside the Synod of Bishops on the family.

Some cardinals — apparently 13 of the 74 cardinals participating in the synod — wrote Pope Francis a private letter expressing concern about a part or parts of the synod procedure, especially the appointment of a 10-member committee to draft the final document the synod will vote on and give to the pope. The names of the cardinals signing the letter changed over the course of the day, with four declaring they did not sign any letter and two others saying the leaked letter published by Italian blogger Sandro Magister is not the letter they signed.

In addition Oct. 13, Cardinal Norberto Rivera Carrera of Mexico City issued a statement saying, “I never signed the alleged letter with the attributed content that some mention.”

“I recognize that the appropriate place of discussion is with other synod fathers and under the guide of the pope, who is our guarantor of unity in the church and who has my utmost respect and loyalty,” Cardinal Rivera added.

The synod is supposed to be a process true to the Greek roots of the word meaning “walking together.” Perhaps more than a family feud, what happened in mid-October was a family walk. Anyone with a big family — or even with just a couple very young members — knows how hard it is to keep everyone moving at the same pace and on the same trail with no arguments over rest stops or detours.

Australian Archbishop Mark Coleridge of Brisbane, writing on his blog, said the whole letter to-do was a “typically Roman melodrama, not untinged with psychodrama.”

In his comments that morning, Pope Francis insisted Catholic doctrine on marriage would not been touched or put into question, Father Lombardi told reporters at the time, and he asked the synod “not to give into a ‘hermeneutic of conspiracy,’ which is sociologically weak and spiritually unhelpful.”

Jesuit Father Antonio Spadaro, a synod member appointed by the pope, tweeted that day that Pope Francis encouraged a “profound discernment” in order “to understand how the Lord wants his church.”

Cardinal Pell told the news site Vatican Insider Oct. 13 that he was “fundamentally satisfied” with the pope’s response.

Father Lombardi told reporters that publishing the letter, or some form of it, a week after the pope responded to the cardinals’ concerns was an “act of disturbance not intended by the signatories — or at least of the most authoritative among them.”

“It is not surprising” that questions were raised about the new synod method, which gives more time to small group work and having them amend the working document rather than write a list of propositions for the pope, Father Lombardi said. But once the pope decided how he wanted things done, it was time for synod members to get to work, “which is what is happening.”

Pope Francis and members of the synod on the family, along with other guests, were scheduled to celebrate the 50th anniversary of the establishment of the Synod of Bishops Oct. 17. Blessed Paul VI established the synod to assist him in governing the universal church by providing him with counsel based on information and observation drawn from their pastoral and theological experience around the world. It is not a deliberative body like a parliament.

Pope Francis, a Jesuit, has made changes in the synod process to expand the time for dialogue and to create the time and space needed for discernment in the style of St. Ignatius of Loyola, the Jesuit founder.

“When you are involved in a process of discernment, you know where you are beginning, but not where you will end up,” Father Spadaro, editor of the Jesuit journal La Civilta Cattolica, told Catholic News Service Oct. 13. In addition, he said, “discernment is not a spiritually abstract process — it involves real people with real life experiences, concerns and even prejudices.”

“Discernment can be experienced as destabilizing, which can create worry and fear that pillars of certainty are being shaken,” he said. “But discernment according to the thought of St. Ignatius of Loyola has the Gospel and church tradition as the firm pillars. And Pope Francis, as the guide of this process of discernment, told synod members clearly at the beginning that the pillars of church doctrine on marriage are not up for discussion.”

According to Archbishop Coleridge, two synod members late Oct. 13 mentioned “the smoke of Satan” entering the church; one said it would come with changing pastoral practice and the other said it would come from “an anxious and ideologically driven spirit of partisanship.”

Father Spadaro said in the process of discernment, “one is not just seeking God’s will, but a discernment of the spirits at work. The ‘spirit of the world’ or the ‘evil one’ has a full arsenal at his disposal, including tactics defined as ‘sub specie boni,'” or things that appear good. “This happens, for example, when one tries to take the pope’s place as the defender of doctrine or when people let themselves imagine orthodoxy is in peril, sowing uncertainty and confusion. This is a classic tactic of the enemy, which is well described by St. Ignatius in his Spiritual Exercises.”

When the Holy Spirit speaks, tensions can rise. But that can be positive because it shows “that the spiritual process is active. It would be bad if there were a dead calm,” Father Spadaro said.

More worrying, he said, is the fact that the letter leaked to the press expresses concerns that could be interpreted as questioning the authority of the pope.

“Using the words of Paul VI, the synod is there to ensure the pontiff is not lacking ‘the consolation of the presence’ of bishops, who express their opinion, bringing news and information from various parts of the world,” Father Spadaro said. “Certainly it has no deliberative power unless it is conceded by the pontiff. It is important not to betray the spirit of the synod.”

NEXT: At audience, pope asks forgiveness for scandals in Rome and the Vatican