Archbishop Chaput: Synod does include ‘lobbying’ in search of truth 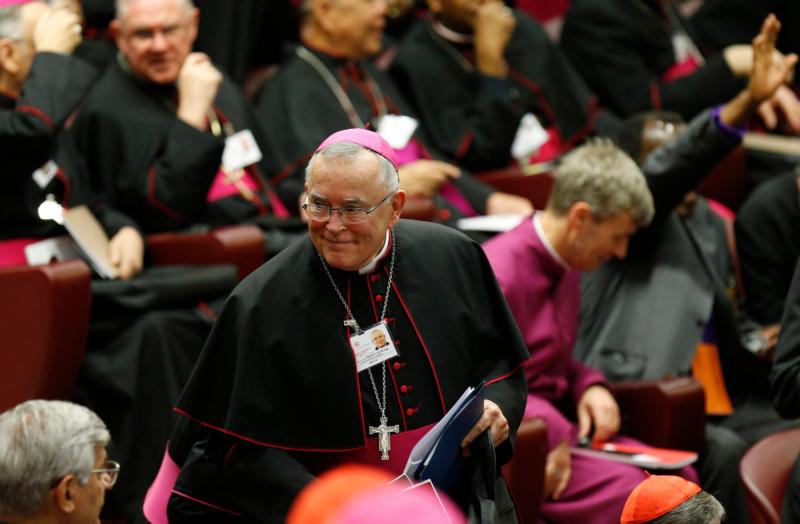 Archbishop Charles J. Chaput of Philadelphia arrives for the opening session of the Synod of Bishops on the family at the Vatican Oct. 5. (CNS photo/Paul Haring)

VATICAN CITY (CNS) — When a big group of people gathers to discuss something important, people start lobbying, even if that group is the world Synod of Bishops, said Archbishop Charles J. Chaput of Philadelphia.

Pope Francis told participants Oct. 6 “we should avoid thinking of each other as conspiring against one another, but to work for unity among the bishops,” Archbishop Chaput told reporters at a synod press briefing at the Vatican Oct. 7.

“I have never been at a church meeting where there aren’t groups that get together and lobby for a particular direction and that’s going on, I assure you,” the archbishop said. “That’s what happens when human beings get together. We shouldn’t be surprised or scandalized by that as long as it’s done up front and honestly and not in a way that tries to win rather than to arrive at the truth.”

French Archbishop Laurent Ulrich of Lille told reporters he heard Pope Francis’ admonition as an encouragement “to safeguard serenity in our discussions.”

“And the pope told us last year, didn’t he, that we should speak with all freedom and listen to each other with all humility,” added Peruvian Archbishop Salvador Pineiro Garcia-Calderon of Ayacucho.

A journalist asked the bishops about the possibility that national or regional bishops’ conferences would be given more responsibility for some matters, including pastoral approaches to marriage, given the diversity issues impacting families around the world.

The reporter cited Pope Francis’ exhortation, “The Joy of the Gospel,” which said: “A juridical status of episcopal conferences which would see them as subjects of specific attributions, including genuine doctrinal authority, has not yet been sufficiently elaborated. Excessive centralization, rather than proving helpful, complicates the church’s life and her missionary outreach.”

“At the same time, diversity is always in the service of unity in the Catholic Church,” so “I don’t think we would say it is appropriate for bishops’ conferences to decide matters of doctrine and things like that.”

Belgian Bishop Johan Bonny of Antwerp had told the synod Oct. 6, “In their local churches bishops encounter a great variety of questions and needs to which they must provide a pastoral answer today.”

Responses to the questionnaire set out by the Vatican before the synod and the consultations bishops carried out in preparation for the synod showed that many of the most important questions raised “clearly differ between countries and continents,” Bishop Bonny said.

“There is, however, a common theme in those questions, namely the desire that the church will stand in ‘the great river of mercy.’ It is important that the synod give space and responsibility to the local bishops to formulate suitable answers to the pastoral questions of that part of the people of God which is entrusted to their pastoral care. The individual bishops’ conferences have a special role in this.

“The synod not only deals with ‘the family as church,’ but also with ‘the church as family,'” he said. “Every family knows what it means to work on unity in diversity, with patience and creativity.”

NEXT: Church and society must learn from families, pope says at audience