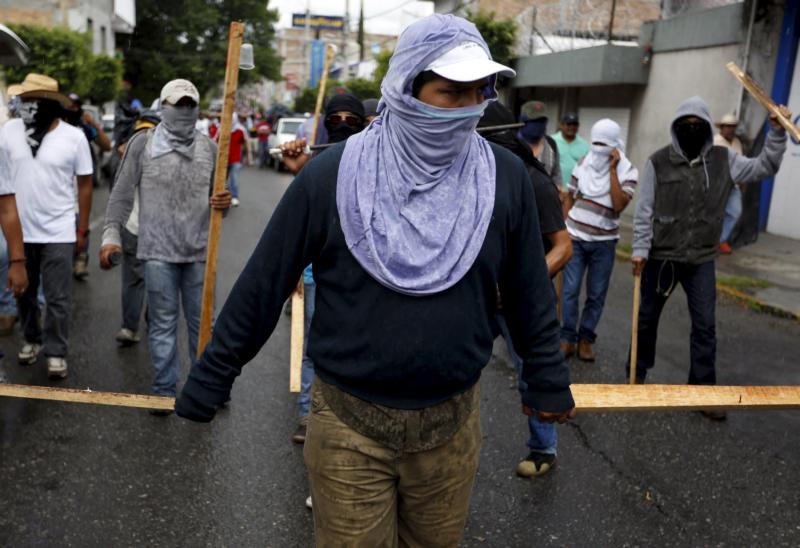 Demonstrators hold batons as they take part in a Sept. 27 march to mark the first anniversary of the disappearance of 43 students from a teachers college in the southern Mexican state of Guerrero. The Mexican bishops' conference and the Vatican have confirmed Pope Francis will visit Mexico in 2016. (CNS photo/Jorge Dan Lopez, Reuters)

MEXICO CITY (CNS) — The Mexican bishops’ conference and the Vatican have confirmed Pope Francis will visit Mexico in 2016, marking his first trip to this heavily Catholic country in throes of unrest over unresolved issues such as violence, crime and corruption.

Auxiliary Bishop Eugenio Lira Rugarcia of Puebla, conference secretary-general, told Catholic News Service that the pope would travel to Mexico next year, though dates and details were still to be determined. Jesuit Father Federico Lombardi, Vatican spokesman, provided similar information to the Televisa network, adding the trip would likely take place during the first half of 2016 and include a stop in the capital, Mexico City.

Pope Francis has previously mused about visiting Mexico, home to the world’s second-largest Catholic population. After visiting the Philippines last year, the pope said he wanted to walk from Mexico into the United States “as a sign of brotherhood and of help to the immigrants,” along with visiting the Basilica of Our Lady of Guadalupe, the world’s most-visited Marian shrine.

He said in September that he had planned to enter the United States at a border crossing, going from Ciudad Juarez to El Paso, Texas, but opted to instead visit Cuba after the communist country and the United States ended their estrangement, with Vatican assistance.

Migration — in the form of Central Americans traveling through Mexico and and falling victim to criminals and corrupt public officials — is one of many potential issues on the agenda for Pope Francis in Mexico.

A visit in early 2016 would come as the country continues confronting vices like corruption, which has implicated the president, and insecurity in states such as Michoacan and Guerrero, the latter being where 43 students were kidnapped and presumably killed by police acting in cahoots with criminals in September 2014.

President Enrique Pena Nieto, whose agenda has focused more on economic reforms than social and security problems, has traveled twice to the Vatican since Pope Francis’ election. In June 2014, his visit followed the bishops’ conference issuing an unusually terse statement on his economic agenda.

Politicians from Pena Nieto’s Institutional Revolutionary Party — which was founded by the anti-clerical victors of the Mexican Revolution — previously avoided public encounters with prelates, but have sought well-publicized papal audiences in recent years, reflecting the thaw in church-state relations over the past 25 years.

Pope Benedict XVI made the last papal trip to Mexico in March 2012, visiting Guanajuato state. His visit drew an estimated 600,000 people for the final Mass — doubling expectations — though his message stayed away from uncomfortable issues such as security.

According to census data, Mexico remains one of Latin America’s most Catholic countries, with 83 percent of the population professing the faith.

NEXT: Archbishop Chaput: Synod does include ‘lobbying’ in search of truth