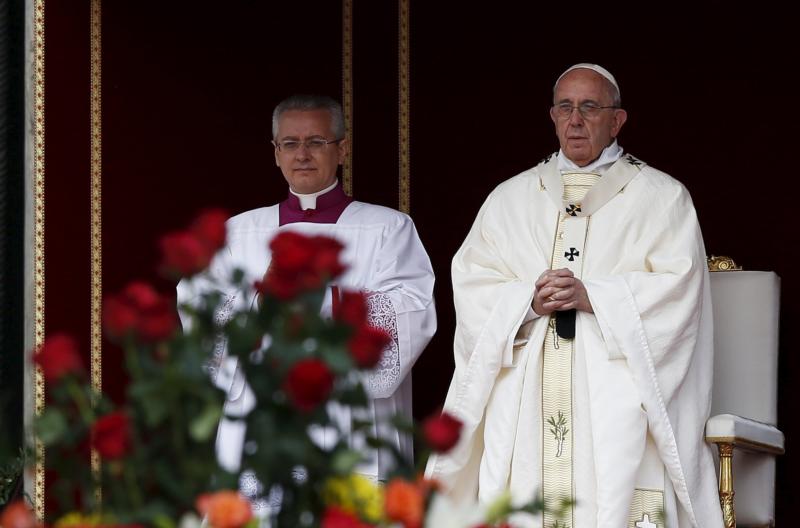 Pope Francis leads the Oct. 18 Mass for the canonization of Spanish Sister Maria of the Immaculate Conception, a member of the Congregation of the Sisters of the Company of the Cross; Italian Father Vincenzo Grossi, founder of the Institute of the Daughters of the Oratory; and Louis and Marie Zelie Guerin Martin, parents of St. Therese of Lisieux, in St. Peter's Square at the Vatican. (CNS photo/Alessandro Bianchi, Reuters)

VATICAN CITY (CNS) — Pope Francis called on people to replace their thirst for power with the joy of quiet and humble service, as he proclaimed four new saints, including the parents of St. Therese of Lisieux.

All of Christ’s disciples, especially its pastors, are called to model themselves after Jesus and “suppress our instinctive desire to exercise power over others, and instead exercise the virtue of humility.”

The pope said the new saints — a Spanish religious woman, an Italian priest and the first married couple with children to be canonized together — “unfailingly served their brothers and sisters with outstanding humility and charity in imitation of the divine master.”

On World Mission Sunday Oct. 18 in St. Peter’s Square, during the Synod of Bishops on the family, the pope created the following new saints:

— Louis Martin (1823-1894) and Marie Zelie Guerin Martin (1831-1877), the French parents of St. Therese of Lisieux. They had nine children; four died in infancy and five entered religious life. During their 19-year marriage, the couple was known to attend Mass daily, pray and fast, respect the Sabbath, visit the elderly and the sick, and welcome the poor into their home.

— Italian Father Vincenzo Grossi (1845-1917), founder of the Institute of the Daughters of the Oratory. 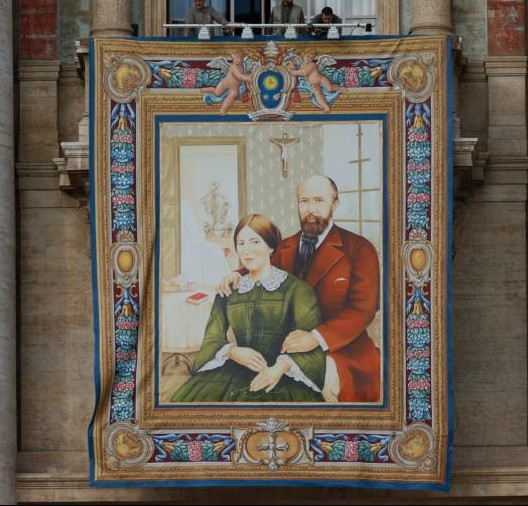 Workers prepare a banner of Louis and Marie Zelie Guerin Martin, the parents of St. Therese of Lisieux, on the facade of St. Peter’s Basilica at the Vatican Oct. 16 in advance of a canonization. On Oct. 18  (CNS photo/Paul Haring)

— Spanish Father Vincenzo Grossi (1926-1998), a member of the Congregation of the Sisters of the Company of the Cross.

Some 65,000 people attended the Mass, including the more than 300 cardinals, bishops and others taking part in the Oct. 4-25 synod on the family.

While the pope’s homily pointed to the new saints as inspiring examples of joyful servants who completely trusted in God, he dedicated the bulk of his reflection on the day’s readings and the Christian meaning of authority and hierarchy.

He said the prophet Isaiah said the servant of the Lord “is not someone of illustrious lineage; he is despised, shunned by all, a man of sorrows. He does not do great things or make memorable speeches; instead he fulfills God’s plan through his humble, quiet presence and his suffering.”

It was Jesus’ life and attitude of profound service that “were the cause of our salvation and the reconciliation of mankind with God,” the pope said.

Jesus invites everyone to follow him on this same path of love and service, he said, and to “reject the worldly temptation of seeking first place and commanding others.”

“Faced with people who seek power and success, the disciples are called to do the opposite,” the pope said.

Those who exercise “genuine authority” in the church and the Christian community are those who serve others and “lack real prestige.” Jesus calls people “to pass from the thirst for power to the joy of quiet service,” the pope said.

Jesus’ teaching and example clearly show there is “no compatibility between a worldly understanding of power and the humble service, which must characterize authority.”

Because Jesus fully shares in the human condition, with the exception of sin, he can empathize with human weaknesses, the pope said. “The fact that he is without sin does not prevent him from understanding sinners.”

“Jesus exercises a true priesthood of mercy and compassion” by loving and accepting God’s children; by sharing in their weakness; by offering them “the grace which heals and restores”; and by accompanying them “with infinite tenderness amid their tribulations,” he said.

Through baptism, all Christians must share in this ministry by opening one’s heart to God in order to receive his love and charity, which is to be received not only “for ourselves, but also for others.”

Pope Francis again praised the new saints before reciting the Angelus in St. Peter’s Square and called for their intercession.

He asked families to entrust their joys, dreams and difficulties to Sts. Louis and Marie Guerin Martin; he asked that the example of St. Grossi be an inspiration for people dedicated to offering young people a Christian education; and he prayed that St. Maria of the Immaculate Conception “help us live in solidarity and in closeness with those most in need.”

NEXT: Pope calls for ‘synodal’ church where all listen, learn, share mission