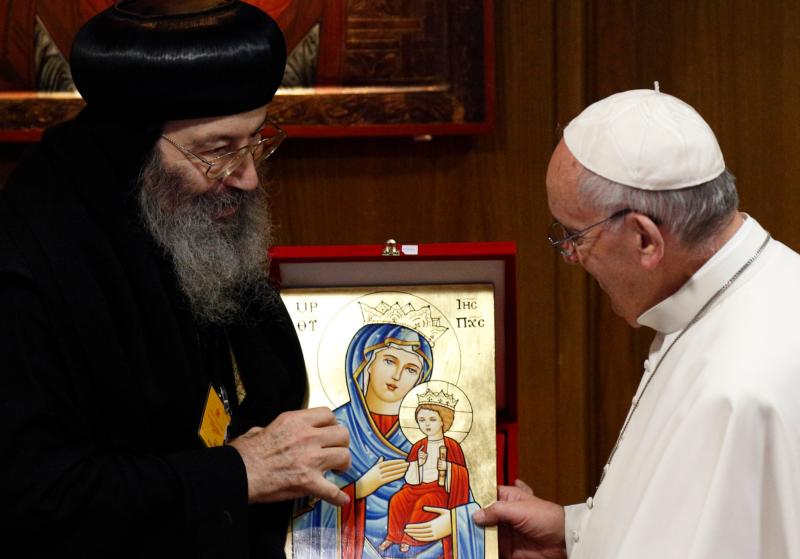 Pope Francis accepts an icon of Mary and the Christ Child from Coptic Orthodox Metropolitan Bishoy of Damiette, Kafr El-Sheikh, and Bararya, all in Egypt, before a session of the Synod of Bishops on the family at the Vatican Oct. 15. (CNS photo/Paul Haring)

VATICAN CITY (CNS) — Remember that Christ is a friend who invites sinners to his table, and do not forget God’s call to repent and live holy lives, some representatives of Christian communities told the world Synod of Bishops.

Many of the 12 nonvoting “fraternal delegates,” whose presentations were published by the Vatican Oct. 16, touched on the themes of mercy; the Eucharist as a sacrament for healing, not a reward; the possibility of allowing divorce and remarriage in the Orthodox Christian tradition; and the need for repentance. The delegates are invited by the pope and represent a variety of Orthodox, Anglican and Protestant churches.

Representing the Coptic Orthodox Church, Metropolitan Bishoy of Damiette, Kafr El-Sheikh, and Bararya, Egypt, said “our church allows divorce in cases of adultery” and other sexual transgressions. He suggested that divorce and remarriage could perhaps be granted “only to the innocent party.”

Nonetheless, he said, those who are not married in the church or are in a second marriage “need a pastoral service that is pastoral and convincing.”

It should be clearly underlined, he added, that any marriage ceremony not celebrated in the church is not sacramental; it “hinders the couple from integrating into the sacramental life of the church”; and it does not benefit from “a holy bond,” which helps the home and children be “blessed” and raised in “a sound, peaceful way.”

Representing the Syriac Orthodox Church, Patriarch Ignatius Aphrem II of Antioch said the Orthodox church sees the sacrament of the Eucharist as “medicine for wounded souls” and as a way to help people rebuild their broken relationship with God.

The salvific power of the Eucharist “should never play a part in the norms of punishment, except for certain exceptional cases,” his text said.

Quoting Pope Francis’ words on the feast of Corpus Christi June 4, “the Eucharist is not a prize for the good, but strength for the weak, for sinners,” the patriarch said it is through the Eucharist that Jesus “heals our weaknesses and draws us toward him.”

Speaking at a Vatican news conference Oct. 16, Metropolitan Stephanos of Tallinn and all Estonia, representing the Orthodox Church of Estonia, said when a couple marries, they know it is meant for eternity and have no initial intention of divorcing.

However, for some people, they no longer see or sense that love that once united them and begin to “self-destruct.”

Metropolitan Stephanos said the bishop is not obligated to give a divorce, but he does take the couple’s condition of weakness, sin and despair into account.

The goal at hand is to help the people involved work through their conflicts and rebuild their lives through a long and precise penitential process, he told reporters.

If there is a second marriage, he said, it is not the same as the first which is a “triumphal” and celebratory occasion, and the subsequent, which is “penitential” in nature with both spouses looking at their situation with full honesty.

Retired Bishop Ndanganeni Phaswana of South Africa, representing the Lutheran World Federation, said in his written presentation, “Frequently, politics, religion and culture are instrumentalized and used to divide people and nations. This has led to growing alienation and disunity.”

Instead, Christians are called to use the Gospel’s healing power and God’s call to overcome that fragmentation to build communion with him and one another.

The Rev. A. Roy Medley, representing the Baptist World Alliance, urged the synod fathers to continue emphasis on Scripture, prayer life in the family and the pastoral nature of ministry, as Jesus said, “I desire mercy, not sacrifice.”

“There is no perfect family and no perfect marriage,” he said. While families are a source of great blessing, they can also be a place of terrible harm when there is sexual abuse or battles over inheritance.

“People yearn for mercy,” and Baptist hymns are replete with references to Jesus as a friend who is present “in the midst of our imperfections and struggles,” said Rev. Medley.

Christ, “in his vocation of suffering servant, enters our woundedness” and invites sinners to sit at his table, said the Baptist minister.

People are longing for Jesus, but ironically, they seldom expect to find him, even through the church’s ministers, he said. Instead people often expect harsh judgment and “they see us abandoning them in the midst of their greatest personal struggles.”

Medley said the world is asking the church if Jesus still invites sinners to his table and if “in the imperfection of our lives, can we discover through you, ‘What a friend we have in Jesus?'”

The Rev. Tim Macquiban, representing the World Methodist Council, said the church should model the ideal of the family as “a safe place, a place of care and compassion, of flourishing for all kinds of disciples,” as well as be “a home for those whose lives are holy.”

Anglican Bishop Timothy Thornton of Truro, England, representing the worldwide Anglican Communion, said families are on a constant journey and will always change. People are only getting a “snapshot” of the place where they are at right now, and the Christian hope is that all families “will grow, develop and mature.”

“If we are joyful, mature Christian disciples we will not be afraid or over anxious about the changes that are happening to each one of us as well as to families around the world,” he said.

The Christian faith finds its joy and hope precisely in knowing that change is not only always possible, it’s always unfolding.

“Every day we’re called to be converted to Christ, turn away from sin and turn to God. Every day we open ourselves to the possibility of transformation,” he said.

NEXT: Canonizing four saints, pope urges people to serve others with joy