Catholics in Jerusalem praying, and hoping, for peace 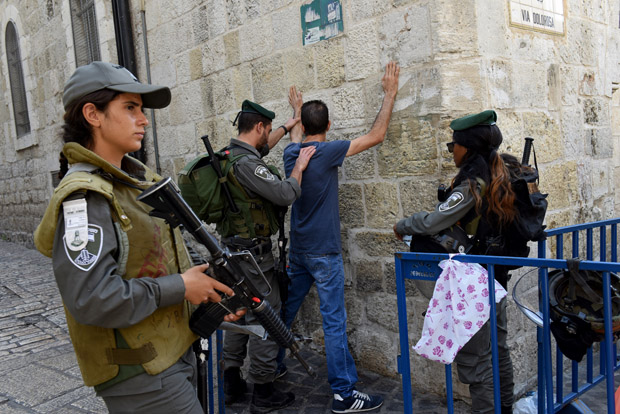 Israeli border police make a Palestinian face the wall for a body security check on the Via Dolorosa in Jerusalem's Old City Oct. 18, near a site where several recent stabbings have taken place. (CNS photo/Debbie Hill) 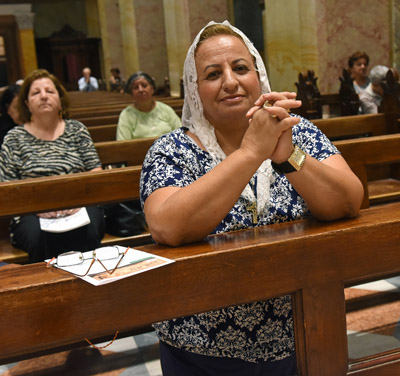 JERUSALEM (CNS) — Following a week that included Palestinians stabbing Israelis, bloody clashes between Palestinian protesters and Israeli security forces, and despair rising on both sides, the parishioners of St. Saviour Church in the Old City of Jerusalem came to Mass Oct. 19 to pray, mainly for peace.

Christians have been staying mainly in the Christian Quarter of the Old City as yet another wave of violence plays itself out between Israeli security forces and Palestinians, she said, and parents have been keeping a closer eye on their children.

Most of the attacks have been carried out by young Palestinians, some as young as 13, and what started in Jerusalem has spread to other Israeli cities. Fighting between Israeli soldiers and Palestinians continues in the West Bank and along the border with Gaza. The clashes between the two left at least 44 Palestinians and seven Israelis dead since the beginning of October.

St. Saviour is in the Christian Quarter, but not far from where, earlier in the month, stabbings took place on a part of the Via Dolorosa that is in the Muslim Quarter.

Over a number of decades, several Muslim Quarter properties have been bought by Jews, including a religious seminary and a long unused house purchased by former Prime Minister Ariel Sharon. It is also along this portion of the Via Dolorosa that Jews walk through from the main Damascus Gate to reach the Western Wall.

The armed Israeli border policemen standing guard at the fourth and fifth station of the cross, where a metal detector has been placed, are meant to prevent further attacks.

Since the tensions began, Frieda Michail, 53, said she no longer lets her children go out and takes them and picks them up from school herself.

“We tell our children that politics is not for us, to leave it for the big people. If you want to live in peace you have to take care of your children. I tell them we are the brothers of Muslims and we are the brothers of Jews,” said her husband, William, 54. “I tell my children to be safe; to be good. I think there is only one God, for Muslims, Christians and Jews. If one of us has a problem, there are problems for all of us. I say it is not right these kids killing each other. It is sad for everybody.”

Auxiliary Bishop William Shomali, chancellor of the Latin Patriarchate of Jerusalem, said that as he made his way into the church accompanied by several children preparing their readings for the mid-morning family Mass, it was more important than ever to remain strong in faith.

“We keep our children safe by teaching them their faith, sending them to Catholic school and giving them a good example,” he told CNS. 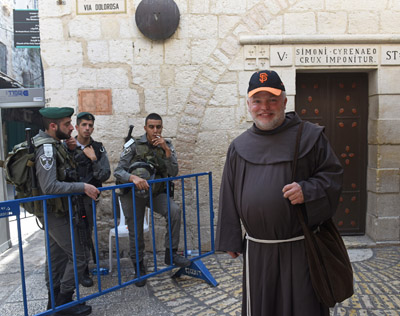 Brother Mark McPherson of Los Angeles walks by the fifth station of the cross on the Via Dolorosa in Jerusalem’s Old City Oct. 18, as Israeli border police stand guard near a site where several recent stabbings have taken place. (CNS photo/Debbie Hill)

In the church, religious try to keep a warm atmosphere for the children, teaching them about the Catholic faith and providing them with a safe gathering place. But recently the children have been very tense and anxious, said Gustavo Ramirez, a Salesian seminarian from Mexico who has been in Jerusalem for two years and who has been helping in catechism classes.

“We try to talk and smile and calm them by the way we do our work,” he said. “For me, it is sacrilegious that these things are happening in the Holy Land, but at the same time, upon reflection, the Via Dolorosa is the symbol of Christ’s suffering, and these people are experiencing that suffering now. It is the suffering of both people.”

Though the streets are less crowded than normal and hotels have reported cancellations, groups of pilgrims from Taiwan, Poland, India and Spain still walk the Via Dolorosa, or Way of the Cross, stopping at the stations and taking the presence of the border police in stride, with some pausing to snap pictures with the obliging young men and women in uniform.

“I know that violence is inherent to this place,” said Luis Vernajo, 66, a pilgrim from Madrid on his fourth visit to the Holy Land. “It is very complicated for a person to face that hate, but the desire to be here is so strong that you put that to the side. This place deserves for us to come here. Since the Psalm of David there has been a prayer for the peace of Jerusalem, and we all have to try and contribute to this. We all have to pray for a better peace of Jerusalem.”

Franciscan Brother Mark McPherson, an American originally from Los Angeles who has been in the Holy Land for three years, said he tries to make his presence on the Via Dolorosa a positive influence. He chats amiably equally with the Muslim shopkeepers as well as the Israeli soldiers.

“I try to be warm and friendly to everybody, also to the soldiers,” he said, noting a shopkeeper had just chastised him for taking a picture with some soldiers, calling them “killers.” “They are also probably scared, they are also young kids. You can’t assume they are killers.”

Near the Armenian Catholic Patriarchate, at the fourth station, a young Jewish Orthodox mother, wearing a long skirt and a blue turban wrapped around her hair, walked down the street with her baby strapped to her chest in a baby carrier. Three armed private security guards towered over her as they accompanied her along the street. Shortly after, a border policeman called over a young Palestinian man to stand by the wall and frisked him for possible concealed weapons.

Heading down toward the Muslim quarter from the Christian Quarter, Jack Hliemat, 17, made the sign of the cross as he passed Saint Saviour and hurried to pick up breakfast for his family before they went to Mass.

“My parents tell me to be careful when I go out, but I am not afraid because I don’t do anything wrong,” he said.

Not far from the spot where a few week earlier an Israeli family was stabbed, killing the father and injuring the mother, Samir Asm, 56, reads a newspaper in front of the T-shirt shop he has run for 35 years. A blue T-shirt emblazoned with the word “peace” in Hebrew, Arabic and English hangs on display next to him.

“We like peace and we should help each other,” he said. “Even if we don’t have peace, I will sell my (peace) T-shirts.”