China announces it will change its policy, allow all families 2 children 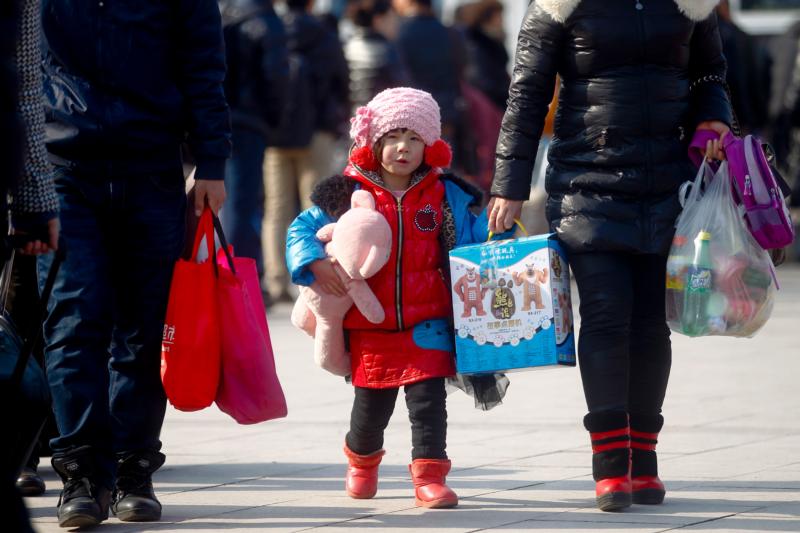 A young girl carrying a stuffed toy holds on to her mother's hand in 2013 as they walk outside the train station in Beijing. China's Communist Party leaders announced they would change the nation's one-child policy, which most strictly applied to Han Chinese living in urban areas of the country. (CNS photo/Diego Azubel, EPA)

BEIJING (CNS) — China’s Communist Party leaders announced they would change the nation’s one-child policy, which most strictly applied to Han Chinese living in urban areas of the country.

The Oct. 29 announcement was contained in a Xinhua news agency report on the Communist Party’s Central Committee in Beijing. It said China would allow all couples to have two children, but did not provide additional details.

The Chinese government imposed its one-child policy in 1979 to curb the growth of the population that, at that time, was reaching 972 million people. The policy most strictly applied to Han Chinese, but not to ethnic minorities around China. Han families in rural areas could apply to have a second child if the first child was a girl. In areas where the policy was enforced, parents could lose their jobs for having more than one child. Sometimes the second or third child was penalized and could not be registered, so he or she could not go to school.

The one-child policy often was enforced at the provincial level, and enforcement varied; some provinces relaxed the restrictions. In a 2007 interview with Catholic News Service, Jean-Paul Wiest, research director of The Beijing Center for Chinese Studies, said some provinces provided that if each spouse was a single child, the couple could have two children. How much the policy was followed also depended on local officials, Wiest said. For instance, in some strong Christian areas, the village’s chief official might be Catholic, so the policy might not be enforced.

In October 2012, state media reported the Chinese government think tank China Development Research Foundation had proposed replacing the one-child policy with a nationwide two-child policy by 2015. It prompted more questions on the role of demographics in economic development and reform and how to proceed with the policy restricting the number of children couples could have.

A Chinese government census report released in April 2011 recorded a mainland Chinese population of 1.34 billion people. In 2013, there were reportedly 200 million senior citizens and a labor force that had shrunk by 3.5 million in 2012, even though the one-child policy had been relaxed slightly through the years.

A 2011 report on China’s aging population by Maryknoll Father Michael Sloboda for the Hong Kong Diocese’s Holy Spirit Study Centre referred to the “4-2-1” problem in which the policy leaves four grandparents and two parents looking to one child for support.

“Since that young adult will also be concerned about finding a spouse and starting a family, the financial and emotional demands will be intense,” Father Sloboda wrote.

In 2013, some young Chinese adults born under the nation’s one-child policy told CNS they were planning their families based on personal experience. Many cited issues such as loneliness growing up and pressure as an adult to take care of elders as reasons to have more than one child. Others recalled families with multiple children separated by economic pressures, such as the woman who, at age 9, began living with her teacher while her parents left to find work. She was separated from her brother, who was left with a different teacher.

Some Chinese church officials also said that the policy, with its decrease in population, had resulted in a decline in vocations.

PREVIOUS: Strength in adversity: When families are everything

NEXT: New interfaith gathering offers prayers for peace in Jerusalem