Strength in adversity: When families are everything 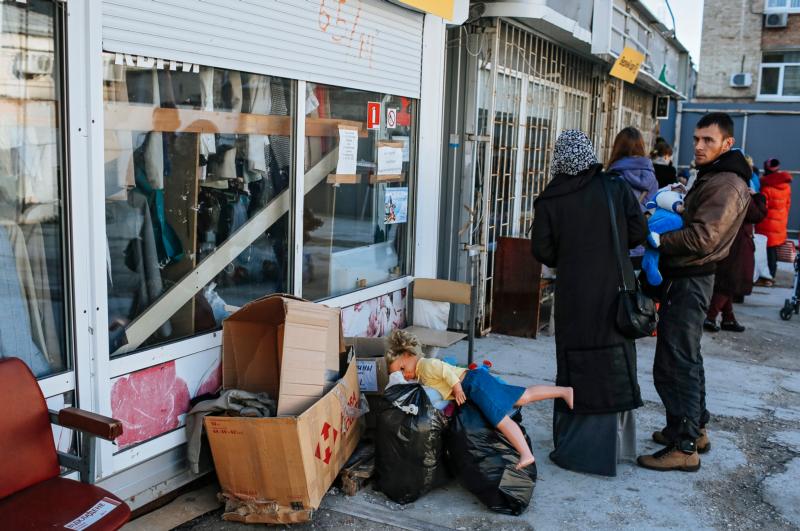 An internally displaced Ukrainian family stands in line as they wait for humanitarian aid at a distribution center in Kiev, Ukraine, Oct. 27. The family as a bastion of love and protection in times of war and disaster is a reality, not a pious platitude, said two members of the Synod of Bishops. (CNS photo/Roman Pilipey, EPA)

VATICAN CITY (CNS) — The Catholic Church has long defended the family as the basic unit of society and as a “school of humanity.” The family as a bastion of love and protection in times of war and disaster is a reality, not a pious platitude, said two members of the Synod of Bishops.

Ukrainian Archbishop Sviatoslav Shevchuk, major archbishop of Kiev-Halych and head of the Ukrainian Catholic Church, saw the reality as a youth when Ukraine was under the Soviet Union’s communist rule and he sees it today as hundreds of thousands of people are displaced by the fighting in his country’s Eastern region.

Philippine Cardinal Luis Antonio Tagle of Manila said he sees it every time an earthquake or typhoon hits his country and also in the relationships of refugees forced to flee violence.

Both Archbishop Shevchuk and Cardinal Tagle participated in the Synod of Bishops on the family Oct. 4-25.

“Ukraine today is going through the experience of war,” the archbishop told Catholic News Service. Especially at times when political and social structures are weak and “ideologies are crashing, family remains the last fortress, the last hope, the last protection of human dignity.”

“In this period of adversity,” he said, the family “is becoming stronger and manifesting its true identity.”

The United Nations estimates more than 1.5 million Ukrainians have been displaced by the fighting in the East, he said, but only about 400,000 of them are receiving assistance from international humanitarian organizations, the Ukrainian government and Ukrainian religious or volunteer organizations. The remaining 1.1 million people are being taken care of by their extended families.

Those extended families are Catholic, Orthodox, Muslim, Jewish, Protestant and nonbelievers. The phenomenon is not religious, Archbishop Shevchuk said; it simply demonstrates that families remain the foundation of a society’s existence even when the bigger units of society fail. What is more, the family shows itself to be “an outstanding source of solidarity.”

Cardinal Tagle, who also serves as president of Caritas Internationalis, witnessed the strength of families when he took a quick break from his duties at the synod and traveled to Greece’s border with Macedonia to visit Syrian, Iraqi and Afghan refugees heading toward northern Europe. According to a staff member of the U.N. High Commissioner for Refugees, about 30 percent of the people crossing the border each day were children, most of whom were traveling with their parents.

Standing in the Idomeni refugee transit camp after handing out bags of food to refugees, Cardinal Tagle said the synod was not just about Communion for the divorced and civilly remarried or attitudes toward homosexual people — “although those are really important issues” — but also about how war, migration and poverty are testing families and tearing some apart.

Watching young parents get off buses with their children, standing in line for food, water and clothing, it is obvious how war impacts families and how families resist, he said.

“People are risking their lives for their families,” Cardinal Tagle said. They are setting off on foot to reach refugee camps, crossing seas in rickety boats, getting on trains and hoping that the next border will still be open.

At the transit center, he said, “I was shocked by what I saw: the loneliness, the fear, the tiredness. And you see people coming with one bag, a backpack, the clothes on their back. You see that their only wealth is their family. They would do everything, everything for their families.”

At the end of the synod, participants published an appeal for peace throughout the Middle East, in Ukraine and in African countries suffering ongoing conflict. The fighting, they said, impacts increasing numbers of families and aggravates humanitarian crises.

In their final report to Pope Francis, synod members also showed their special concern for families fleeing violence, especially Christian families fleeing “violent religious persecution,” which has launched a mass exodus from some countries, most notably Syria and Iraq.

But despite real threats and challenges, the synod said, families continue “to find the courage to face the inadequacy and absence” of institutions meant to protect them. Church and society must recognize “the strength of the family,” which “resides essentially in its capacity to love and to teach love. No matter how wounded a family may be, love always helps it grow,” the synod report said.

NEXT: China announces it will change its policy, allow all families 2 children