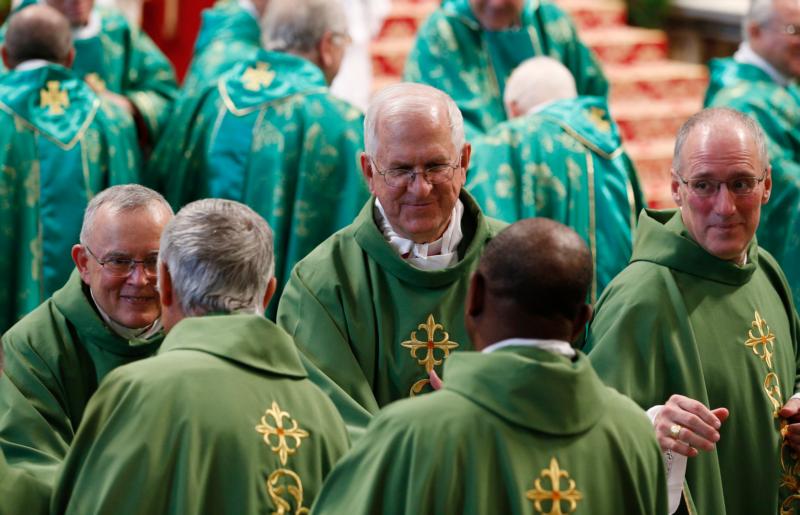 Archbishops Charles J. Chaput of Philadelphia, Joseph E. Kurtz of Louisville, Kentucky, president, U.S. Conference of Catholic Bishops, and Paul-Andre Durocher of Gatineau, Quebec, exchange the sign of peace as Pope Francis celebrates the opening Mass of the Synod of Bishops on the family in St. Peter's Basilica at the Vatican Oct. 4. (CNS/Paul Haring)

VATICAN CITY (CNS) — In a world filled with challenges to marriage and family life, the Catholic Church is called “to carry out her mission in fidelity, truth and love,” Pope Francis said at the Mass opening the world Synod of Bishops on the family.

Formally opening the synod Oct. 4 with a Mass in St. Peter’s Basilica, the pope said the church must encourage families and defend faithful love, the sacredness of every human life and “the unity and indissolubility” of marriage.

At the same time, he said, the church must carry out its mission with charity, not only “not pointing a finger in judgment of others,” but also seeking out all who are lonely and in pain, caring for “hurting couples with the balm of acceptance and mercy.”

The synod was scheduled to last until Oct. 25, discussing ways to strengthen the church’s support of families and its outreach to those struggling to live fully the Catholic ideals of marriage and family life. Marriage preparation, sexuality, procreation, communication, support for couples at risk of separation, accompaniment of divorced Catholics and possible ways to bring back the divorced and civilly remarried were all expected to be on the synod’s agenda.

The readings for the Mass were the same as those used in Catholic parishes around the world for Oct. 4, the 27th Sunday in ordinary time. But, the pope said, they seemed tailor-made for opening an assembly dedicated to the family. The first reading was the Genesis account of God seeing Adam alone and creating a helpmate for him; the Gospel included Jesus’ teaching that “what God has joined together, no human being must separate.” 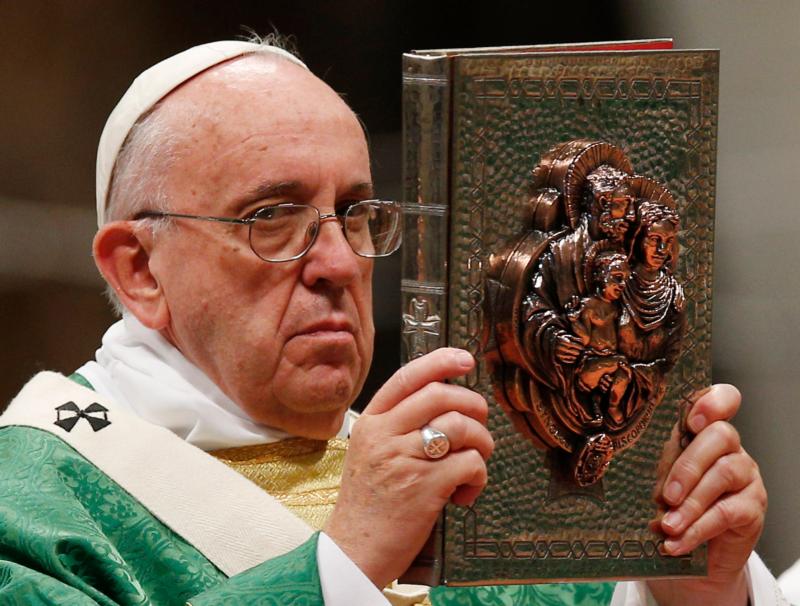 Pope Francis raises the Book of the Gospels during the opening Mass of the Synod of Bishops on the family in St. Peter’s Basilica at the Vatican Oct. 4. The cover of the book is decorated with an image of the Holy Family. (CNS/Paul Haring)

The Genesis story, the pope said in his homily, makes clear that the “drama of solitude” experienced by too many people — the elderly, the abandoned, widows and widowers, migrants, the persecuted — is not part of God’s plan.

The modern world, he said, seems to offer “many pleasures, but few loves; many liberties, but little freedom” and “the number of people who feel lonely keeps growing.”

Yet the experience of Adam, and of human beings down through history, shows that “nothing makes man’s heart as happy as another heart like his own, a heart which loves him,” the pope said. God made man and woman “to complement” each other, “to love and to be loved, and to see their love bear fruit in children.”

Many people today doubt whether a lifelong marriage is possible or even desirable, thinking that it limits individual freedom and potential, the pope said. But at the same time, people “chase after fleeting loves while dreaming of true love; they chase after carnal pleasures but desire total self-giving.”

Reciting the Angelus prayer after Mass, Pope Francis said the 270 synod members would keep their “gaze fixed on Jesus to identify — on the basis of his teaching of truth and mercy — the best paths” for helping families “so that the Creator’s original plan for man and woman can be realized and can function in all its beauty and strength in the world.”

Pope Francis, synod members and tens of thousands of people had gathered in St. Peter’s Square Oct. 3 for a nighttime prayer vigil for the synod. Before the pope spoke, Italian families and an engaged couple shared their stories of finding love, overcoming obstacles and experiencing reconciliation and healing.

The formal prayer began with an invocation of the Holy Spirit on the pope and synod members.

In his homily, Pope Francis asked people to pray that the synod would show the world “how the experience of marriage and family is rich and humanly fulfilling.”

The pope prayed that the synod would “acknowledge, esteem and proclaim all that is beautiful, good and holy” about family life.

But he also prayed that synod members would “embrace situations of vulnerability and hardship,” not forgetting those suffering because of “war, illness, grief, wounded relationships and brokenness.”

Pope Francis prayed that the synod would find a way to remind broken families “and every family, that the Gospel is always ‘good news,’ which enables us to start over.”

NEXT: Pope says synod is not parliament, but place to listen to Holy Spirit