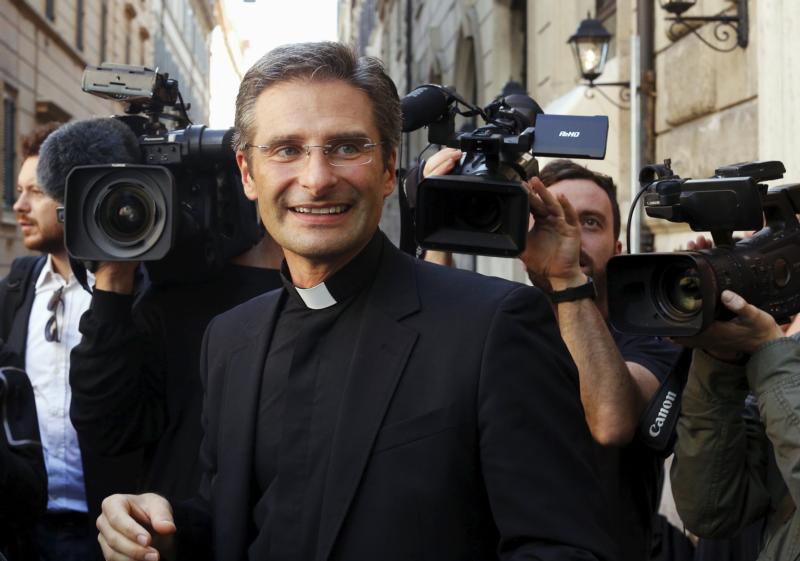 Msgr. Krzysztof Charamsa smiles as he leaves a news conference he called Oct. 3 to announce he is gay and has a partner. The Vatican spokesman said, given Msgr. Charamsa's public announcement, it would be impossible for the monsignor to continue working at the Vatican or teaching at pontifical universities.(CNS photo/Alessandro Bianchi, Reuters)

VATICAN CITY (CNS) — On the eve of the start of the Synod of Bishops on the family, a Polish monsignor who works in the Congregation for the Doctrine of the Faith, publicly declared he is homosexual and has a stable partner.

Msgr. Krzysztof Charamsa, 43, gave interviews to Polish and Italian media Oct. 2 and planned a news conference the following day outside the offices of the congregation. The conference, however, was moved to a restaurant nearby.

Jesuit Father Federico Lombardi, Vatican spokesman, said Oct. 3 that Msgr. Charamsa and his reflections on his life and sexuality were deserving of respect, but “the decision to make such a pointed statement on the eve of the opening of the synod appears very serious and irresponsible, since it aims to subject the synod assembly to undue media pressure.”

The world Synod of Bishops on the family was scheduled to begin Oct. 4 with a Mass.

“Msgr. Charamsa will certainly be unable to continue to carry out his previous work in the Congregation for the Doctrine of the Faith and the pontifical universities,” where he had been teaching: the Pontifical Gregorian University and the Pontifical Athenaeum Regina Apostolorum, Father Lombardi said.

“The other aspects of his situation shall remain the competence of his diocesan ordinary,” the bishop of Pelplin, Poland, Father Lombardi said. Msgr. Charamsa, who has worked at the doctrinal congregation since 2003, was ordained for the Diocese of Pelplin in 1997.

In one of the interviews before his news conference, Msgr. Charamsa told the Italian newspaper Corriere della Sera: “I want the church and my community to know who I am: a gay priest who is happy, and proud of his identity. I’m prepared to pay the consequences, but it’s time the church opened its eyes, and realized that offering gay believers total abstinence from a life of love is inhuman.”

Most priests, like Msgr. Charamsa, in the Latin rite of the Catholic Church take a vow of celibacy. Exceptions, for example in the case of former Anglican priests, have been made for some clergy who were married before becoming Catholic.

On the topic of homosexuality, the Catechism of the Catholic Church says: “Tradition has always declared that ‘homosexual acts are intrinsically disordered.’ They are contrary to the natural law. They close the sexual act to the gift of life. They do not proceed from a genuine affective and sexual complementarity. Under no circumstances can they be approved.”

The catechism also says, homosexual persons “must be accepted with respect, compassion and sensitivity. Every sign of unjust discrimination in their regard should be avoided.”

“Homosexual persons are called to chastity,” the catechism says.

In connection with the synod on the family, Msgr. Charamsa planned to participate in a conference Oct. 3-4 organized by the Global Network of Rainbow Catholics to discuss issues related to the Catholic Church, family life and homosexuality.

PREVIOUS: Hunger is a ‘scandal,’ a ‘sin’ in a world of plenty, pope says