Good news from synod: God’s mercy and forgiveness are for all 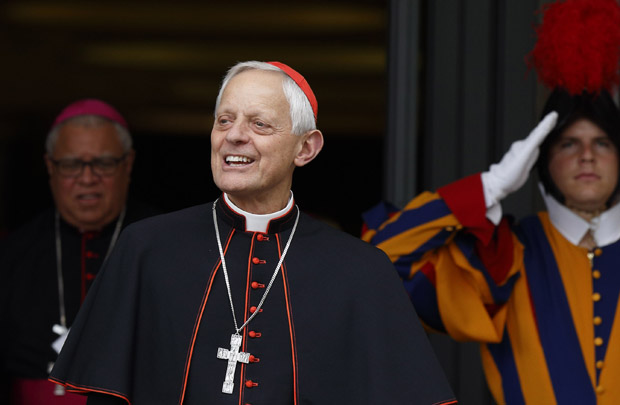 Cardinal Donald W. Wuerl of Washington leaves a session of the Synod of Bishops on the family at the Vatican Oct. 6. (CNS photo/Paul Haring)

VATICAN CITY (CNS) — The heart of the Synod of Bishops on the family is the challenge of discerning ways to reach out with God’s mercy to people, who might not be perfect, and to help them move closer to perfection, said Cardinal Donald W. Wuerl of Washington.

Cardinal Wuerl, speaking to Catholic News Service Oct. 9, said it was important for the synod members to show people around the world both that the church still believes firmly that marriage and family are blessings, but also that church leaders know there are challenges raised by society and by the individuals themselves.

“I think it’s good for people to hear that their shepherds recognize that they are struggling, that it isn’t as easy as it sounds in the catechism,” he said. “At the same time, God’s grace is at work in our lives.”

Many at the synod, he said, are echoing Pope Francis’ call, “Go out. Meet people. The church has an obligation to meet people where they are, encounter them where they are. Not to scold them, but to accompany them on the faith journey.”

Cardinal Wuerl said he is always touched by the pope’s addition of a reminder that “if you accompany them, maybe both of you will get closer to Jesus.”

The key to the pastoral care of families — both the strong and the weak — is Pope Francis’ call to go out and to encounter, the cardinal said.

“Now when you encounter someone, you have to do that with respect,” he said. “Does that mean acceptance of their lifestyle? Not necessarily. But you have to respect them for who they are. And then you begin to walk with them, trying to understand where they are while also inviting them to draw closer to Christ.

“I think that’s what this pope asks us to do: respect people,” he said. “You don’t have to approve what they’re doing, but if you are going to walk with them, you have to do so with a sense of respect.”

But if the synod does not speak openly and honestly about the challenges, he said, nobody will listen to the rest of what the synod has to say.

While people do not need a “fervorino” — a pious pep talk — “admitting, recognizing and seeing the problems has to be balanced with encouragement that not everybody is succumbing to the problem.”

After listening to the small group reports, synod members — including Cardinal Wuerl — began talking about what the church brings to the reality of the family.

The church always has presented its teaching and called people to live it fully, he said. At the same time, the church always has said, “‘When you fail, here’s confession. And when you’re struggling, here’s absolution. The thing to do is to get up and keep trying.’ That’s the beauty of our faith.”

Some people who are living the faith more closely may be tempted to feel neglected or even annoyed, Cardinal Wuerl admitted. Jesus knew those people, too.

In the Gospels, he said, “the Good Shepherd goes out after the one lost sheep. In the parable of the prodigal son, the older son is encouraged by the father to be loving and forgiving so that the one who has been away is welcomed back.

“Remember, Jesus also used the parable about a man going out and hiring people at different hours,” but paying them all the same, Cardinal Wuerl said. When people complained, the landowner said, “Are you annoyed with me because I’m generous?”

“Yes, there could be a temptation to say, ‘Look, I’ve struggled in the heat of the sun all day and what reward do I get? Heaven. And this person comes along at the end of the day and what reward does he or she get? Heaven,'” the cardinal said. “What we need to say is, ‘Isn’t it a blessing that Jesus died on the cross so that all of us could have heaven?'”