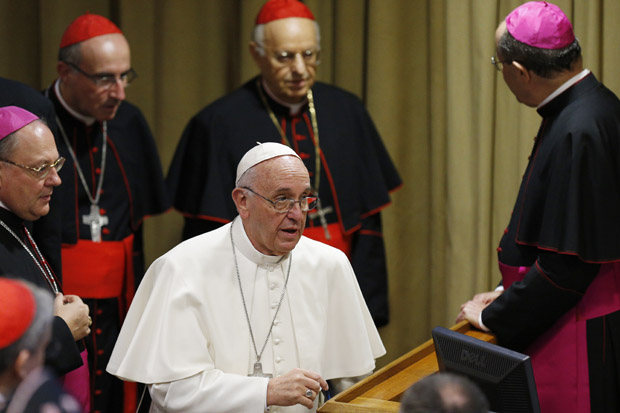 Pope Francis arrives to lead a session of the Synod of Bishops on the family at the Vatican Oct. 9. (CNS/Paul Haring)

VATICAN CITY (CNS) — The first week of the Synod of Bishops on the family ended with near unanimous calls to be more positive in describing family life today and to show more appreciation for Catholic families living close to the church’s ideals. But there were also widespread questions among synod participants about the work they are expected to produce.

After listening to speeches and working in small groups Oct. 5-8, synod participants listened to the small group reports Oct. 9.

“At times our work has seemed more muddled than methodical,” wrote Australian Archbishop Mark Coleridgeon behalf of the synod’s English Group C. “Our hope is that focus, if not perfect clarity, will emerge as the synod unfolds and we become more assured about both task and method.”

(See the report of English Group D, for which Archbishop Charles Chaput is the relator, here.)

During a press briefing Oct. 9, Cardinal Luis Antonio Tagle of Manila, Philippines, one of the synod presidents, told reporters that changes in the synod’s method created some confusion, especially for members who have attended past synods and were accustomed to drawing up a list of propositions to give to the pope. Instead, they have been asked to amend the synod’s working document.

The speeches in the synod hall the first week and the discussions in the small groups focused on the first chapter of the working document; all the small group reports offered suggestions for improving the text while some criticized it harshly, saying much of the text was “flawed,” “inadequate, especially in its theology,” and too Western-centric.

But the working document is meant to be analyzed and ripped apart, Cardinal Tagle told reporters.

“In fact it is called a martyred document,” the cardinal said. “It must be ready to be martyred, to be shot. Otherwise there is no point in calling 300 people (to Rome) just to say, ‘Yes, this is it.'”

The working document includes input from so many different people that the main aim in drafting it was to get everyone’s opinion in and not to produce “a synthetic, cohesive treatise on the vocation and mission of the family,” said Cardinal Tagle, who helped draft the text.

The criticism, therefore, was expected and is “very much welcome,” he added.

Almost all the groups insisted whatever document the synod produced at the end would need to be clear, simple and realistic.

Archbishop Joseph E. Kurtz of Louisville, Kentucky, president of the U.S. Conference of Catholic Bishops, told reporters at the briefing that his small group called for a text using understandable words that “inspired and attract.”

“If marriage is a vocation, which we believe it is, we can’t promote vocations by talking first about its problems,” said the report of English Group D, chaired by Cardinal Thomas C. Collins of Toronto withArchbishop Charles J. Chaput of Philadelphia serving as secretary.

Several groups also insisted the document should include more quotations from Scripture, a clearer reaffirmation of church teaching and, according to one Italian group, ample citations from early church theologians.

Cardinal Tagle said even though the text would be rooted in the Bible, the language used should be “more edifying or encouraging,” and less verbose. There was a recognition that a final document would have to avoid so-called “church-speak,” especially if it was going to speak to young people whose formation might not be so sophisticated, he said. But because it is a work in progress, “We will see what will happen.”

Another Italian group, Group A, said its members want a document using “formulas that from the beginning leave no doubt that the only model of family that corresponds to church doctrine is that founded on the marriage of one man and one woman.”

Like the other groups, French Group C insisted the synod find the right language and tone to speak of the family. “There is a danger in talking about ‘family’ in the abstract, as a reality that is external to us,” the members said. But, in fact, the families the bishops are talking about include the families formed by the bishops’ own parents, their brothers and sisters, cousins and nieces and nephews.

The bishops, the French group wrote, also are people of faith and pastors; faith in Jesus and concern for people in their family lives must be clear in what the synod produces.

French Group A said the synod’s text “must adopt a tone that promotes dialogue with our contemporaries.”

At the same time, the group reported, “we are aware that these next two weeks will not be enough” to complete thoroughly the work the synod has been asked to do.

English Group C agreed. “To address the many issues that we have discussed will take more than the first week or even the three weeks of the synod. A longer journey stretches before us, just as an earlier journey has led us to this point — not just from late 2013 when Pope Francis announced the journey of the two synods but from the Second Vatican Council and all that led to it.”

Several groups also urged the synod to discuss “gender theory,” which argues that male and female characteristics are not biologically determined but are malleable social constructs.

Italian Group A said the synod must point out “the risks of gender ideology as well as its negative impact on educational programs in many countries.”

French Group C explained that sociologists and philosophers developed gender theories in an attempt “to analyze certain human and social phenomena to enrich our understanding of the world. But when these theories become absolute, they tend to produce a single thought system that tries to sweep away everything in its path. In seeking to impose a point of view that denies the relationship between gender and the sexual being that we are in our bodies,” it denies what is “most noble and humanizing” in the family , parenting and human love.

NEXT: Good news from synod: God’s mercy and forgiveness are for all