Jesus’ disciples are called to lead without lecturing, pope says 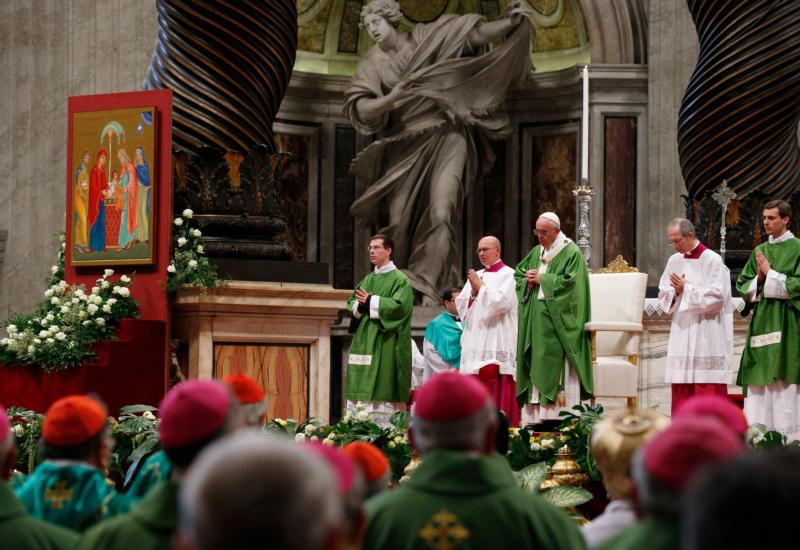 Pope Francis celebrates the closing Mass of the Synod of Bishops on the family in St. Peter's Basilica at the Vatican Oct. 25. (CNS photo/Paul Haring)

VATICAN CITY (CNS) — As disciples, Christians are called to imitate Jesus’ heart and lead others directly to him, without lecturing them, Pope Francis said.

Thousands gathered in St. Peter’s Basilica Oct. 25 for the closing Mass of the Synod of Bishops. The Mass concluded three weeks of intense discussion and debate on pastoral responses to the challenges facing families in the modern world.

Reflecting on the day’s Gospel reading, which recalled Jesus’ healing of Bartimaeus, a blind beggar from Jericho, Pope Francis said Christ is not content with giving the poor man alms, but preferred to “personally encounter him.”

Jesus asking the beggar what he wanted may seem like a senseless question, the pope said, but it shows that Jesus “wants to hear our needs” and “talk with each of us about our lives, our real situations.”

When Jesus’ disciples address Bartimaeus, they use two expressions: “take heart” and “rise,” the pope said.

“His disciples do nothing other than repeat Jesus’ encouraging and liberating words, leading him directly to Jesus, without lecturing him,” he said. “Jesus disciples are called to this, even today, especially today: to bring people into contact with the compassionate mercy that saves.”

In moments of suffering and conflict, he said, the only response is to make Jesus’ words “our own” and most importantly, to “imitate his heart.” Today, the pope said, “is a time of mercy.”

However, Pope Francis also warned that the Gospel shows two temptations that face those who follow Jesus when confronted with people who are suffering. The first is the temptation of falling into a “spirituality of illusion,” shown in the indifference of those who ignored Bartimaeus’ cry, “going on as if nothing were happening.”

“If Bartimaeus was blind, they were deaf: his problem was not their problem,” the pope said. “This can be a danger for us: in the face of constant problems, it is better to move on, instead of letting ourselves be bothered.”

This “spirituality of illusion,” he said, makes one capable of developing world views without accepting “what the Lord places before our eyes.”

“A faith that does not know how to root itself in the life of the people remains arid and creates other deserts rather than oases,” he said.

The second temptation the pope warned against was of falling into a “scheduled faith” where “everyone must respect our rhythm and every problem is a bother.” The pope said that like those who lost patience with the blind man and rebuked him for crying out to Jesus, there is the risk of excluding “whoever bothers us or is not of our stature.”

“Jesus, on the other hand, wants to include above all those kept on the fringes who are crying out to him,” he said. “They, like Bartimaeus, have faith, because awareness of the need for salvation is the best way of encountering Jesus.”

Pope Francis thanked the synod participants for walking together on a path in search of ways “which the Gospel indicates for our times so that we can proclaim the mystery of family love.”

“Never allowing ourselves to be tarnished by pessimism or sin, let us seek and look upon the glory of God, which shines forth in men and women,” the pope said.

PREVIOUS: Synod had difficult moments as it tried to proclaim truth, pope says

NEXT: Pope Francis preaches at Mass for close of Synod of Bishops