Synod had difficult moments as it tried to proclaim truth, pope says 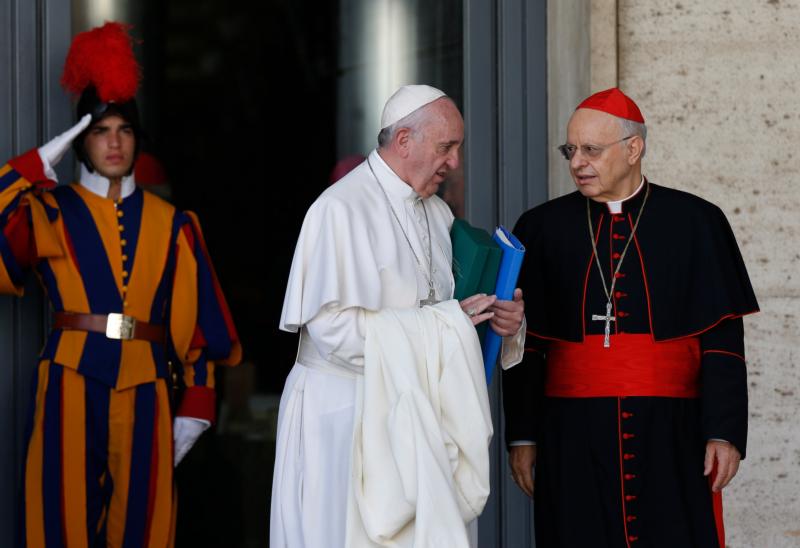 Pope Francis talks with Cardinal Lorenzo Baldisseri, general secretary of the Synod of Bishops, as he leaves a session of the synod at the Vatican Oct. 24. (CNS photo/Paul Haring)

VATICAN CITY (CNS) — The first task of the Catholic Church “is not to hand down condemnations or anathemas, but to proclaim the mercy of God,” Pope Francis told members of the Synod of Bishops on the family.

At the end of the synod’s final working session Oct. 24, Pope Francis was honest about the differences of opinion present among synod participants and about the tone of their discussions sometimes exceeding the bounds of charity. But he framed all those differences as an opportunity for learning.

“In the course of this synod, the different opinions that were expressed freely — and, unfortunately, sometimes with methods that were not completely charitable — certainly led to a rich and lively dialogue,” the pope said.

The synod, he said, was a time of trying “to broaden horizons in order to overcome every hermeneutic of conspiracy or closed-mindedness so as to defend and spread the freedom of the children of God (and) to transmit the beauty of Christian newness, which sometimes is covered by the rust of a language that is archaic or simply incomprehensible.”

“For the church,” he said, “concluding the synod means to go back to really ‘walking together’ to bring to every part of the world — every diocese, every community and every situation — the light of the Gospel, the embrace of the church and the support of the mercy of God.”

The synod sessions, the pope said, were designed to have people speak openly about the needs of families and to face them “without fear and without hiding our heads in the sand.”

The gathering, he said, was a time “to witness to all that the Gospel remains for the church the living source of eternal newness against those who want to ‘indoctrinate’ it into dead stones to hurl at each other.”

Without mentioning specific differences, such as deeply varied cultural approaches to homosexuality, Pope Francis said synod members learned that “what seems normal for a bishop on one continent can seem strange — almost a scandal — to a bishop from another.”

The synod tried to find better ways to convince the world of the importance of the family based on the lifelong marriage of one man and one woman, he said, knowing that it should not be afraid to shake “anesthetized consciences or to dirty its hands animatedly and frankly discussing the family.”

“The experience of the synod,” the pope said, “has made us understand better that the true defenders of doctrine are not those who defend its letter, but its spirit; not ideas, but people; not formulas, but the free gift of God’s love and forgiveness. This is in no way to detract from the importance of formulas, laws and divine commandments, but rather to exalt the greatness of the true God, who does not treat us according to our merits or even according to our works, but solely according to the boundless generosity of his mercy.”

Clearly, he said, the three-week synod did not resolve every problem facing families or even every question of how the church can best minister to them. But it did try “to enlighten them with the light of the Gospel and the 2,000-year tradition and history of the church” formulated in ways people today can understand.

Without acting as if every form of modern family life was equally valid, but also without “demonizing others,” he said, the synod wanted “to embrace fully and courageously the goodness and mercy of God who surpasses our human calculations and wants nothing other than that ‘all would be saved.'”

NEXT: Jesus’ disciples are called to lead without lecturing, pope says