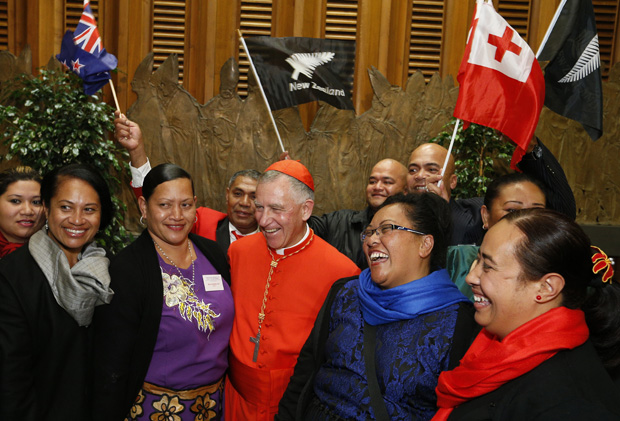 New Cardinal John Dew of Wellington, New Zealand, poses with pilgrims from his country during a reception for new cardinals in Paul VI hall after a consistory at the Vatican Feb. 14. (CNS photo/Paul Haring)

VATICAN CITY (CNS) — Members of the Synod of Bishops are not talking about “the family,” but about “our families” — real people who deserve recognition, friendship and a helping hand, said New Zealand Cardinal John Dew of Wellington.

“One of the big things that is being spoken about a great deal this year is the ‘church speak'” that tends to be a feature of church documents, the cardinal told Catholic News Service Oct. 12. “A lot of people in the hall are saying, ‘Look, this doesn’t actually speak to families,’ and saying that as we prepare document let’s use language which is inspiring, which is hopeful.”

As members of Cardinal Dew’s small working group at the synod went through the working document, he said, one member suggested reading the text and every time it referred to “the family,” substituting the words, “our family.”

Many of the bishops used their interventions to insist on the need “to protect Catholic doctrine,” but Cardinal Dew said, “I don’t think anyone is arguing about that. And I don’t think anyone did last year. We know what the church teaches; we all want to preserve that. But we want to able to put it in such a way that people understand it.”

The goal, he said, is “to hold to church teaching, but explain it in a way that makes sense to people rather than branding them.”

In his speech to the synod, he said, he quoted from a letter issued by the bishops of Oceania in 1994, which said that when families are struggling they need friends.

Cardinal Dew said he told the assembly: “Surely, the church needs to realize that we are there to be friends to people who are struggling or are in difficulty in any way. And even if there is something there which is against church teaching, we put it in such a way that we’re being friendly to them, we’re being helpful to them and being supportive. It’s not denying any teaching or any doctrine, but saying, ‘Look, we’re here to help you, to work with you.’

The cardinal said that he also spoke about language last year at the extraordinary synod on the family. “I said when we have documents, which talk about ‘intrinsically disordered’ (as the Catechism of the Catholic Church describes same-sex attraction) or being evil, that’s not going to help people. We have to find a way to express what the teaching actually says, but not putting it in ways that people feel they are being branded and they are being told that they are bad or evil.”

Families themselves often struggle when a member comes to the realization that he or she is homosexual. The Catholic Church should support those families and must be clear that it does not reject members who are gay.

The point about language has come up again this year, and the cardinal said he hopes the synod’s conclusions “help people to see … that the church is here to support and assist them, especially where there is an area of sexual morality or other area in their family that they are struggling with.”

Cardinal Dew said he is always impressed by priests who know how important it is to sit down with people and explain the teachings of the church that they don’t understand, to take the time to explain why the church is asking something of them.

An “enormous challenge” facing the synod, he said, is trying to find language that “will speak to the world” with the content and tone the bishops want. In many situations, including with the Catechism of the Catholic Church, the local explanations or catechetical directories are invaluable for using terms and examples that are familiar locally, making the church’s message easier to understand.