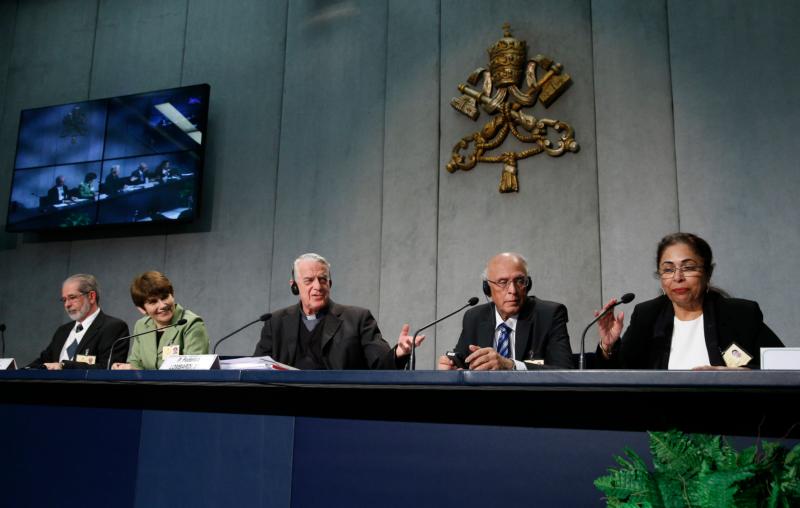 Jesuit Father Federico Lombardi, papal spokesman, introduces two couples attending the Syond of Bishops on the family during a media briefing on the synod at the Vatican Oct. 12. At left are Ketty and Pedro De Rezende from Brazil; at right are Ishwar and Penny Bajaj from India. (CNS/Paul Haring)

VATICAN CITY (CNS) — Two couples attending the Synod of Bishops on the family said what surprised them most about their first synod in Rome was reading inaccurate media coverage of the closed-door proceedings, the diversity problems families face around the world and the synod fathers’ great concern and compassion for the family.

Even though Ketty De Rezende of Brazil studied and lived in the United States and Canada, she said hearing about the diversity of challenges families face in other parts of the world came as a surprise to her.

Ketty, with her husband Pedro, are active in Brazil in the pastoral care of families facing difficulties. But much of what they encountered in the Americas was very different from some of the problems needing attention in Asia and Africa, she said.

Ketty and Pedro De Rezende, professors in mathematics and computer science, respectively, at the University of Campinas, Brazil, spoke to the press Oct. 12 during a Vatican news conference.

The many difficulties facing families, discussed during the first week of the synod, “did surprise us. I think we weren’t quite aware of all these challenges,” she said. 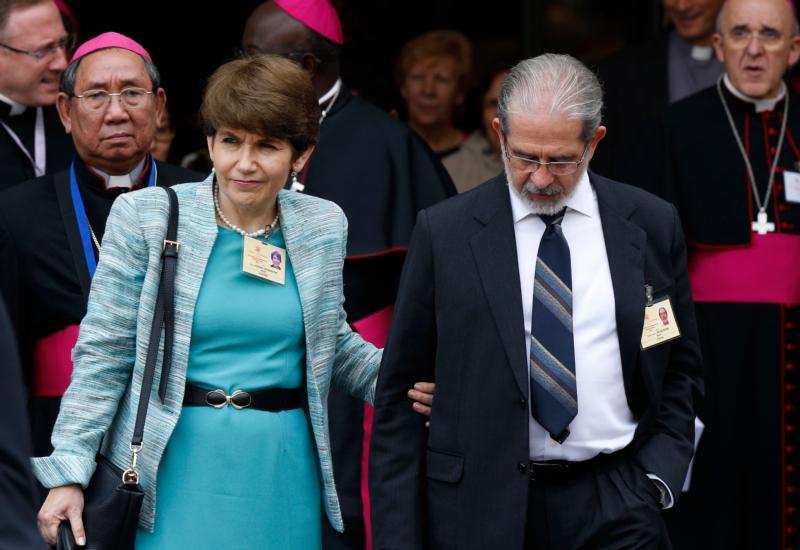 Ketty and Pedro De Rezende of Brazil leave a session of the Synod of Bishops on the family at the Vatican Oct. 9. (CNS/Paul Haring)

Pedro told reporters what surprised him most was “what the press has been publishing.”

“Many, many times it doesn’t reflect what we see in there,” he said.

The synod proceedings are closed to the press, but synod participants are allowed to be interviewed and to release their written speeches to the public.

Pedro De Rezende said that instead of objective reporting on what was being said by synod participants, what he was seeing seemed to be suggestions about “what synod fathers should talk about.”

However, he said, the synod discussions are being guided by the 23,000-word working document that came out in June.

“So I was pretty surprised to see what is coming out is not being quite faithful” to the themes in the document and participants’ input, he said.

“All the synod fathers, the bishops expressed their great love and concern for the family,” said Bajaj, who worked for the Catholic Church in India in a variety of capacities for 45 years. 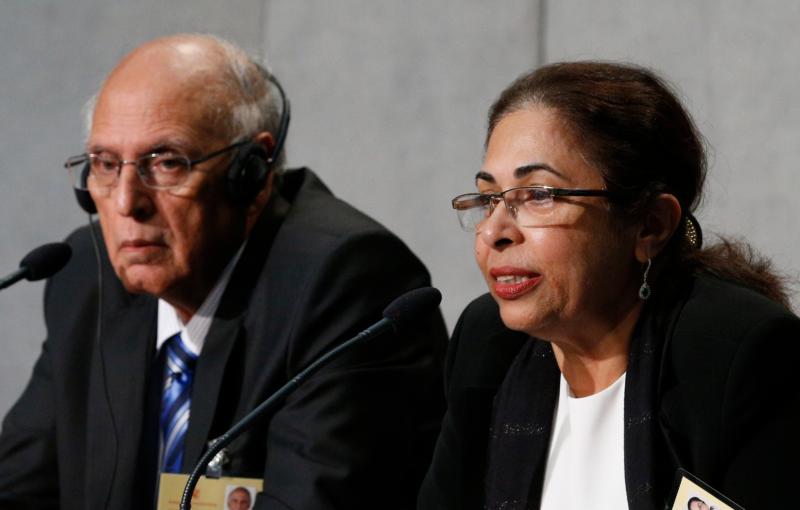 Penny Bajaj, accompanied by her husband Ishwar, speaks during a press briefing after the morning session of the Syond of Bishops on the family at the Vatican Oct. 12.(CNS/Paul Haring)

She said every cardinal, bishop and priest in her small working group spoke about their concern, their love for the family, “especially for the families who are in distress.”

Her husband, Ishwar Bajaj, said he was very impressed that the synod was focusing on forgiveness and mercy, even toward those who have separated from their spouse or have sinned against their family or the church.

“I found that this was a very, very compassionate and loving atmosphere and attitude that the synod was aiming at: to bring the families back into the … church and tell them that there was mercy” and that sins would be forgiven “as long as they repented and changed.”

Ishwar Bajaj, who was raised a Hindu but was baptized into the Catholic Church 13 years ago on his 25th wedding anniversary, said he felt the synod’s focus on mercy “has been a very important and dynamic stand that the church is taking in this current century.”

NEXT: Communion for remarried would undermine doctrine, Polish bishop says