Pope says ministry to divorced, remarried is not only topic for synod 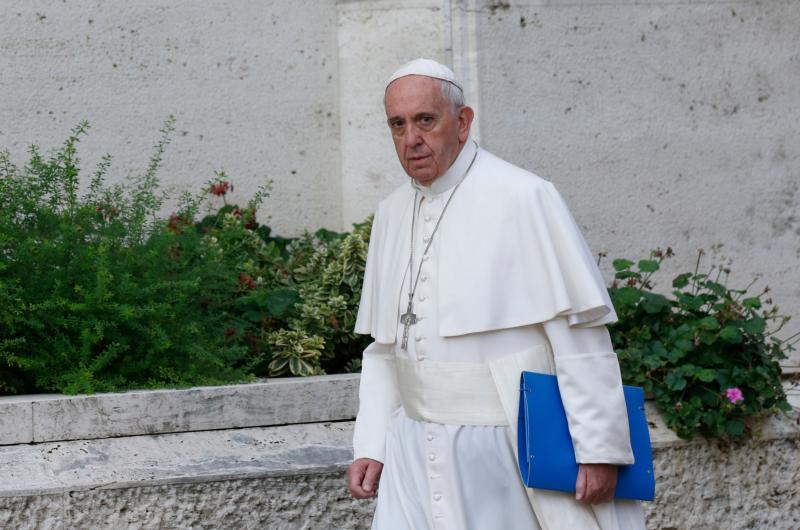 Pope Francis arrives for the morning session of the Synod of Bishops on the family at the Vatican Oct. 6. (CNS photo/Paul Haring)

VATICAN CITY (CNS) — As the discussion began at the world Synod of Bishops on the family, Pope Francis urged members not to act as if the only question that mattered was the pastoral care of divorced and civilly remarried Catholics, his spokesman said.

Jesuit Father Federico Lombardi, Vatican spokesman, told reporters Oct. 6 that the pope took the microphone that morning to affirm again that “Catholic doctrine on marriage has not been touched or put into question.”

Pope Francis told the bishops that the only documents that are “official” for their work are the speeches he gave at the opening and closing of last year’s synod and the final report voted on by synod members in October 2014. The report, along with additions made based on responses to a questionnaire, is the working document for this year’s synod, Father Lombardi said.

The pope also said, “We should not let ourselves be conditioned by or to reduce the horizons of our work as if the only problem were that of Communion for the divorced and remarried or not,” Father Lombardi said. The Vatican did not release the text of the pope’s remarks.

Australian Archbishop Mark Coleridge of Brisbane, writing on his blog, said that during the hour of open discussion at the synod Oct. 5, some bishops were “uneasy about the impression given by the presentation of Cardinal (Peter) Erdo in the morning that some key questions are already decided and seemingly off the table. They felt that such a stance was premature.”

Cardinal Erdo, archbishop of Esztergom-Budapest, Hungary, chosen by Pope Francis to introduce the synod’s work, had made it appear there was little support for or possibility that the church would adopt German Cardinal Walter Kasper’s proposal to design a “penitential path” that eventually would allow some divorced and civilly remarried Catholics to receive Communion even without an annulment and without a promise to abstain from sexual relations.

Responding to reporters later, Cardinal Erdo said his report’s affirmation of the indissolubility of marriage and moving away from seeking a pastoral approach to allowing those couples to receive Communion were the result of the input the synod sought from Catholics around the world after the extraordinary synod on the family last year.

Using his Twitter account to report Pope Francis’ comments to the synod Oct. 6, Jesuit Father Antonio Spadaro, a synod member, said the pope asked the synod “not to give into a ‘hermeneutic of conspiracy,’ which is sociologically weak and spiritually unhelpful.”

Instead, Father Spadaro tweeted, the pope called for a “profound discernment” in order “to understand how the Lord wants his church.”

Archbishop Claudio Maria Celli, president of the Pontifical Council for Social Communications and member of the synod, told reporters the discussion about the “penitential path” or other forms of outreach to divorced Catholics “is open. I think the intervention of the pope this morning … was to recall that the documents to which we are to refer are the final report (of the 2014 synod) and his two speeches — opening and closing the synod — which leave open the possibility.”

At the same time, the archbishop told reporters, “the synod does not have this as its only point of reference” as the pope himself said. “It is just one of the points.”

“If everything was concluded with the report yesterday (by Cardinal Erdo), then what are we doing here?” Archbishop Celli asked.

Canadian Archbishop Paul-Andre Durocher of Gatineau, Quebec, a synod member who also attended last year’s extraordinary synod on the family, said participants see a growing distance between modern cultural attitudes toward marriage and family life and what the church teaches and proposes.

Catholic pastors have different attitudes about what the response should be, he said. “One reaction is to emphasize what the teaching is for fear that, as the culture moves away from that vision, our own understanding gets diluted. The other fear is that we lose contact with that culture and that we close in on ourselves and become a kind of a ghetto or a sect that no longer has an impact on culture.”

“All the bishops agree,” he said, “that the teaching of the church coming from Jesus is a gift for the world — it’s not just for a select few.”

The challenge, Archbishop Durocher said, is to not lose the teaching while learning to enter into dialogue with the world as it is “in a way that will speak to the world and provoke its imagination and its interest. So some bishops will emphasize the teaching and some bishops will emphasize the dialogue,” which is the importance and beauty of the synod, he said.

“Cardinal Erdo’s talk was a beautiful and classical presentation of the church’s teaching,” he said. “Other bishops are saying, ‘This is important. We need to hold on to this. Now how do we enter into dialogue with this world.'”

Cardinal Erdo’s presentation, he said, “is an important piece, but it is one piece” of finding a way to bring the good news about the family to the world.

At the official media briefing for the synod, Father Lombardi and the others charged with summarizing the synod’s activity each day listed dozens of other topics raised by the first 72 synod members to speak: the challenges to families and the church posed by the “cultural revolution”; the need to be careful in using language that appears immediately judgmental; how to help all Catholics and families grow in the Christian life; war, anti-Christian persecution and migration; violence against women and children; polygamy; and the role of the family in the new evangelization.

Preparing priests to minister with and to families was another topic, said Basilian Father Thomas Rosica, the English-language briefer. He also listed the topics of the role of the extended family; multiple calls for better and longer marriage preparation programs; and the need to love and respect homosexual Catholics, who are “our children, our family, not outsiders, but our flesh and blood.”