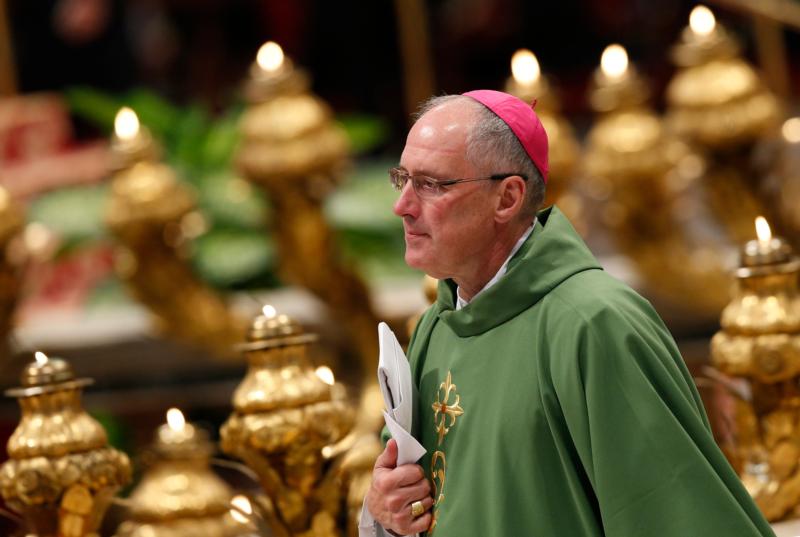 Canadian Archbishop Paul-Andre Durocher of Gatineau, Quebec, arrives for the opening Mass of the Synod of Bishops on the family celebrated by Pope Francis in St. Peter's Basilica at the Vatican Oct. 4. (CNS/Paul Haring)

VATICAN CITY (CNS) — Canadian Archbishop Paul-Andre Durocher of Gatineau, Quebec, said the synod should reflect on the possibility of allowing for female deacons as it seeks ways to open up more opportunities for women in church life.

Where possible, qualified women should be given higher positions and decision-making authority within church structures and new opportunities in ministry, he told Catholic News Service Oct. 6.

Discussing a number of proposals he offered the synod fathers to think about, he said, “I think we should really start looking seriously at the possibility of ordaining women deacons because the diaconate in the church’s tradition has been defined as not being ordered toward priesthood but toward ministry.”

Currently, the Catholic Church permits only men to be ordained as deacons. Deacons can preach and preside at baptisms, funerals and weddings, but may not celebrate Mass or hear confessions.

Speaking to participants at the Synod of Bishops on the family Oct. 6, Archbishop Durocher said he dedicated his three-minute intervention to the role of women in the church — one of the many themes highlighted in the synod’s working document.

The working document, which is guiding the first three weeks of the synod’s discussions, proposed giving women greater responsibility in the church, particularly through involving them in “the decision-making process, their participation — not simply in a formal way — in the governing of some institutions; and their involvement in the formation of ordained ministers.”

Archbishop Durocher, who recently ended his term as president of the Canadian Conference of Catholic Bishops, told CNS that much of his brief talk was focused on the lingering problem of violence against women, including domestic violence. He said the World Health Organization estimates that 30 percent of women worldwide experience violence by their partner.

He reminded the synod fathers that in the apostolic exhortation “Familiaris Consortio” in 1981, St. John Paul II basically told the church that “we have to make a concerted and clear effort to make sure that there is no more degradation of women in our world, particularly in marriage. And I said, ‘Well, here we are 30 years later and we’re still facing these kinds of numbers.'”

He said he recommended one thing they could do to address this problem was, “as a synod, clearly state that you cannot justify the domination of men over women — certainly not violence — through biblical interpretation,” particularly incorrect interpretations of St. Paul’s call for women to be submissive to their husbands.

In his presentation the archbishop also noted that Pope Benedict XVI had talked about the question of new ministries for women in the church. “It’s a just question to ask. Shouldn’t we be opening up new venues for ministry of women in the church?” he said.

In addition to the possibility of allowing for women deacons, he said he also proposed that women be hired for “decision-making jobs” that could be opened to women in the Roman Curia, diocesan chanceries and large-scale church initiatives and events.

Another thing, he said, “would be to look at the possibility of allowing married couples — men and women, who have been properly trained and accompanied — to speak during Sunday homilies so that they can testify, give witness to the relationship between God’s word and their own marriage life and their own life as families.”

PREVIOUS: Pope says ministry to divorced, remarried is not only topic for synod

NEXT: Bishops, Vatican confirm Pope Francis will visit Mexico in 2016