Pope, synod join in prayers for peace in Middle East 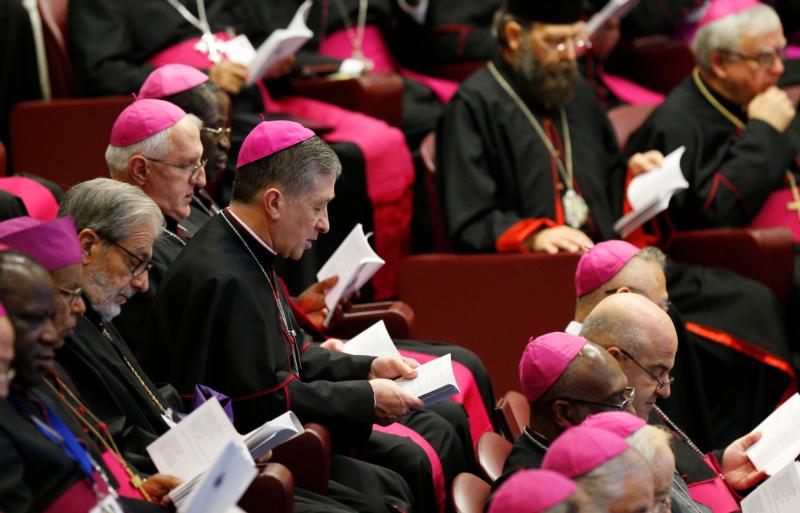 U.S. Archbishop Blase J. Cupich of Chicago participates in prayer at the start of a session of the Synod of Bishops on the family attended by Pope Francis at the Vatican Oct. 9. (CNS/Paul Haring)

VATICAN CITY (CNS) — Gathered with a worldwide representation of bishops, including patriarchs and other bishops from the Middle East, Pope Francis dedicated the morning prayer of the Synod of Bishops on the family to pleas for peace in the Middle East.

Opening the synod’s session Oct. 9, Pope Francis asked the more than 300 synod participants to devote their day’s prayer to “the intention of reconciliation and peace in the Middle East.”

“We are painfully struck and follow with deep concern what is happening in Syria, in Iraq, in Jerusalem and the West Bank, where we see an escalation of violence that involves innocent civilians and continues to fuel a humanitarian crisis of enormous proportions,” Pope Francis told the synod.

In September and again in October, Jerusalem and the West Bank were rocked by violent outbursts involving both Palestinians and Israelis with shootings, stabbings, riots and arson attacks.

Speaking just a few hours before the Nobel Committee awarded the peace prize to Tunisians working for peace and democracy, Pope Francis told synod participants, “War brings destruction and multiplies the sufferings of peoples. Hope and progress come only from choices for peace.”

The synod’s prayers for peace, he said, are intended as “an expression of solidarity” with the Middle East patriarchs and bishops, “as well as with their priests and faithful and everyone who lives there.”

Speaking in the name of the synod, the pope also made “a heartfelt appeal to the international community, that the nations of the world might find a way to effectively help the parties concerned to broaden their horizons beyond their immediate interests and to use the instruments of international law and diplomacy to resolve the conflicts underway.”

Before entrusting his prayer to “Mary, queen of peace,” the pope also prayed for areas in Africa that are experiencing conflict.

PREVIOUS: Pope’s remarks seen as a road map of urgent actions for U.N. to take