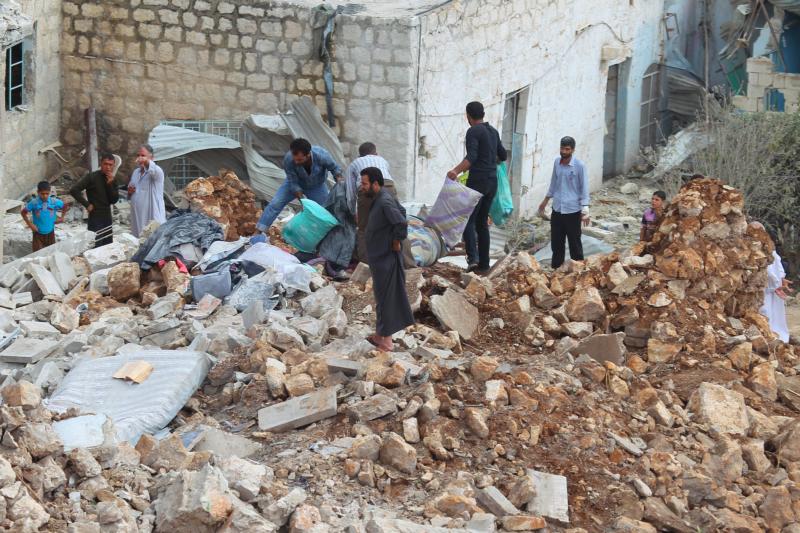 Civilians carry belongings recovered from a site hit by what residents said were airstrikes carried out by the Russian air force in Aleppo, Syria, Oct. 7. (CNS photo/Ammar Abdullah, Reuters)

Melkite Catholic Archbishop Jean-Clement Jeanbart of Aleppo said that the bombing of rebel positions by Russian jets was “a source of hope” for Syria.

He told Suisse Romande television Oct. 8 that the intervention into the Syrian civil war by Russia “serves the Christian cause” and generated “renewed confidence among Christians in Syria.”

“(Vladimir) Putin is solving a problem,” said Archbishop Jeanbart, who will speak to British politicians Oct. 13 in London about the persecution of Christians in his country.

His comments came three days after the Islamic State released a video showing the murders of three Assyrian Christians captured by in Hasakah province in February.

They also came a week after Syriac Catholic Archbishop Jacques Behnan Hindo of Hassake-Nisibi defended the Russian campaign while accusing the United States of arming al-Qaida terrorists under “a different name.”

Archbishop Hindo said Western opposition to Syrian President Bashar al-Assad was wrong because it could make Syria “like Libya”, a country in a near state of anarchy after the U.S., Britain and France helped to bring down Moammar Gadhafi in 2011.

Archbishop Hindo told Fides, the news agency of theCongregation for the Evangelization of Peoples at the Vatican, that McCain’s words represented “a blatant admission that behind the war against Assad there is also the CIA.”

“There is something very disturbing about all this,” he said in an Oct. 2 interview published online. “There is a superpower that since Sept. 11 protests because the Russians hit the militias of al-Qaida in Syria.

“What does it mean, (that) al-Qaida is now a U.S. ally, just because in Syria it has a different name?” he asked.

“Western propaganda keeps talking about moderate rebels, who do not exist,” he continued, adding that the “Syrians will decide if and when Assad has to go away, and not the Daesh (Islamic State) or the West.”

The following day, Peter Ford, a former British ambassador to Syria, criticized Britain’s foreign policy against Assad as a “shambles.”

In an Oct. 3 interview with Sky News, Ford predicted that the Christian minority in Syria would be “massacred” by jihadists if Assad was ousted.

“The fall of the regime will be opening a Pandora’s box such as we saw with the fall of Gadhafi in Libya and when Saddam Hussein fell,” he said.

“Is this what (Prime Minister) David Cameron really wants, to open another Pandora’s box?” he said. “Does he not realize that the fall of the Assad regime would lead to the massacres of Christians, Shias, Alawites, Druze and other minorities?

“I realize it is not fashionable to point to the plight of Christians in the Middle East today but he (Cameron) would have blood on his hands if Assad were to fall as the result of Western support for what Cameron amazingly called the ‘legitimate opposition’ to Assad,” Ford said.

“Let us be clear here – we are talking about jihadis,” he added. “Most of the opposition groups are jihadis, the so-called Free Syrian Army is just a footnote. If Assad was to fall — and the Russians thankfully realize this -– it would be a disaster.”