Promises must be made in freedom, honored with sacrifice, says pope 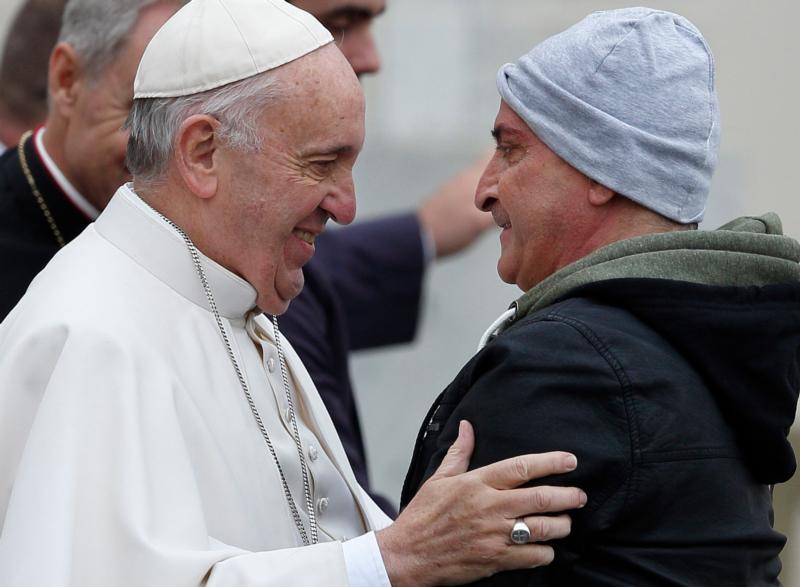 Pope Francis embraces a man while greeting the disabled during his general audience in St. Peter's Square at the Vatican Oct. 21. (CNS photo/Paul Haring)

VATICAN CITY (CNS) — Bring honor back to keeping one’s promises, which must be made in full freedom and kept by making sacrifices, Pope Francis said.

The pope also prayed for the intercession of “the pope of the family,” St. John Paul II, whose optional memorial is Oct. 22. He asked that the Synod of Bishops on the family “renew in the whole church the meaning of the indisputable value of the indissoluble marriage and healthy families, based on the mutual love between a man and woman and divine grace.”

The pope dedicated his catechesis to the promise of love and fidelity made between a husband and wife.

“The identity of the family is founded on promise,” he said, which can be seen in the loving care families provide one another in sickness and in health, and by accepting each other’s limitations and helping each other realize their full potential.

It is a promise of love that must not stay holed up in the home, but must expand to embrace one’s extended family, the community and the whole human family, the pope said.

Unfortunately, he said, honoring one’s promises has lost its standing. That is because, on the one hand, “a misunderstood right to pursue one’s own pleasure at all costs and in any relationship is exalted as a non-negotiable principle of freedom,” he said.

On the other hand, people “exclusively entrust the bonds of life’s relationships and the commitment to the common good to the requirements of law,” he said.

But in reality, he said, nobody wants to be loved because of selfish reasons or out of compulsion.

“Love, just like friendship, owe their strength and beauty to this fact: that they generate a bond without removing freedom.”

“Freedom and fidelity are not opposed to each other, rather, they support each other” as people grow in the “free obedience to one’s word,” he said.

There is no better place than marriage and the family to teach the beauty and strength of keeping promises. “If we look at its audacious beauty, we are intimidated, but if we scorn its courageous tenacity, we are lost,” the pope said.

But this “masterpiece” and “miracle” of being true to one’s word must be an honest desire rooted in one’s very heart and soul — because promises “cannot be bought and sold, they cannot be coerced with force but nor can they be safeguarded without sacrifice,” he said.

“It’s necessary to bring social honor back to the fidelity of love,” he said, as well as bring to light the hidden miracles of millions of men and women who are building and rebuilding their families and promises every day.

St. Paul says the love which grounds the family points to the bond of love between Christ and the church, the pope said. That means, he said, that the church itself can find in the family “a blessing to safeguard” and always something to learn — even before it tries to teach or apply church discipline to it.

“Love for the human family, for better or for worse, is a point of honor for the church,” he said.

The pope asked that God bless the work of the Synod of Bishops that has gathered to discuss, “with creative fidelity,” the vocation and mission of the family.

He asked for prayers that the church would “uphold and strengthen the promise of the family” with an “unfailing trust in that faithful love by which the Lord fulfills his every promise.”

NEXT: Apologies and processes: Synod groups end with varied offerings