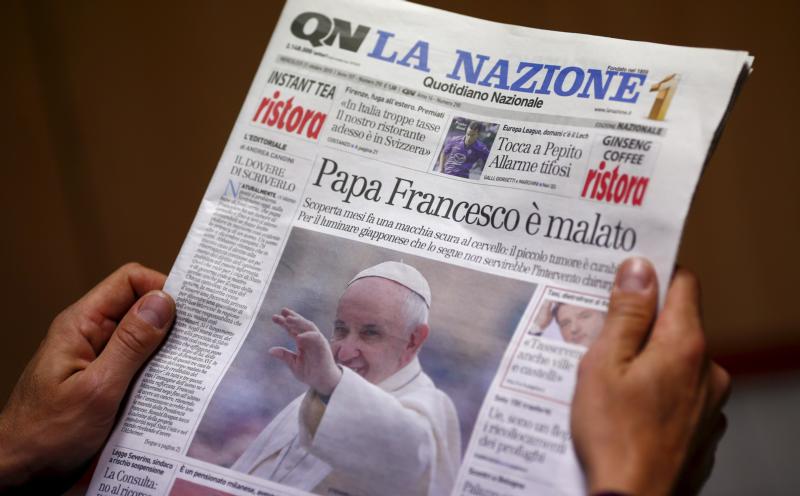 After checking with the pope himself and other sources, Father Lombardi told reporters “the pope enjoys good health” and that the unsubstantiated news report was “a serious act of irresponsibility, absolutely unjustifiable and unspeakable.”

The “Quotidiano Nazionale” reported Oct. 21 that an unnamed nurse at a clinic in Pisa told the paper that the pope visited the clinic several months ago and that tests revealed a “small dark spot” — “a small brain tumor.”

The paper reported that the anonymous source said the condition could be taken care of without surgery and that the specialist following the case was Dr. Takanori Fukushima, a neurosurgeon who teaches at Duke University Medical Center in North Carolina and travels to clinics in Japan and Pisa.

However, the doctor denied the reports in a written statement later in the day, saying, “I have never medically examined the pope. These stories are completely false.”

The newspaper’s editor-in-chief told the Italian news agency ANSA that they waited until now to publish the report because they were unsure about making it public, but then decided to because the pope is a public figure.

Further calling into question the veracity of the report, Dr. Giulio Maira, an Italian neurosurgeon who was interviewed by the same paper under the headline “Pope Francis has a tumor,” called Father Lombardi by telephone from New York City Oct. 21 to say the reporter who called him had only asked him generic questions about brain tumors. No reference was made to the pope and he felt that he had been “tricked,” the doctor told Father Lombardi.

Father Lombardi had said in a written statement earlier in the day, “The circulation of entirely unfounded news regarding the health of the Holy Father by an Italian newspaper is gravely irresponsible and unworthy of attention. Furthermore, as is clearly evident, the pope is carrying out his very intense activity in a totally normal way.”

NEXT: Promises must be made in freedom, honored with sacrifice, says pope