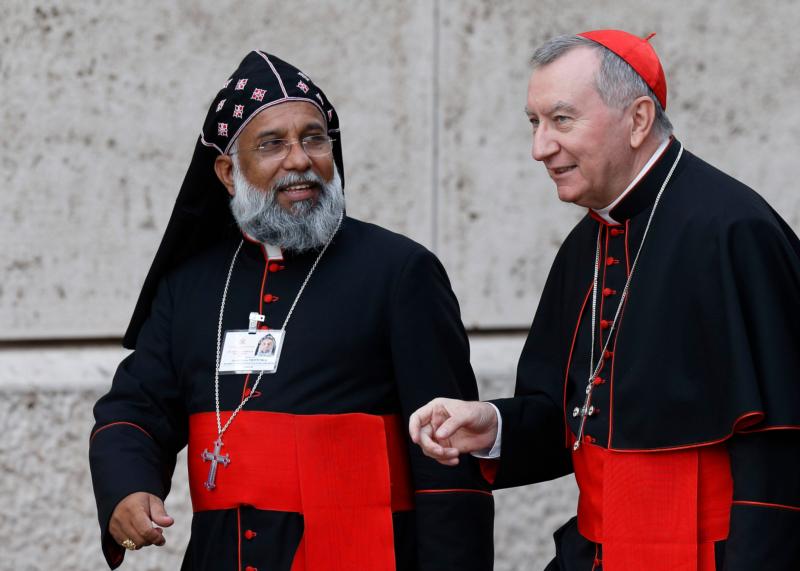 Cardinals Baselios Cleemis Thottunkal of Trivandrum, India, major archbishop of the Syro-Malankara Catholic Church and Pietro Parolin, Vatican secretary of state; arrive for the morning session of the Synod of Bishops on the family at the Vatican Oct. 6. (CNS photo/Paul Haring)

VATICAN CITY (CNS) — Spirituality is “the backbone” of Christian family life, and it must be encouraged and nourished, especially when it is threatened by a culture focused on making money and having the latest modern conveniences, said Indian Cardinal Baselios Thottunkal.

The cardinal, major archbishop of the Syro-Malankara Catholic Church, said he is grateful that Christians in India have held on to their spiritual and cultural tradition of strong family life, and he was proud to share that with other members of the Synod of Bishops on the family.

Speaking to Catholic News Service Oct. 15, Cardinal Thottunkal said most Christian families in India still have a strong conviction that “a family that prays together stays together.”

Particularly for the Eastern Christians — Catholic as well as Orthodox — that includes “family prayer, the common Bible reading, the fasts, the abstinences” as well as cultural family traditions, he said. “Spirituality is the backbone of the family; it doesn’t survive by itself. It needs to be nourished by the Christian virtues, the Christian practices and the religiosity of the Christian church.”

The variety of spiritual traditions and cultures within the universal Catholic Church is not something to fear, the cardinal said, but an opportunity to share for the benefit of all.

“The Catholic Church is a beautiful blend of the Western and Eastern traditions, and also the various cultures, the countries, they can offer positive solutions to the issues which we have in common,” he said.

Differences of opinion and approach at the Synod of Bishops were to be expected, he said. The task of synod participants is to come up with suggestions for strengthening families and ministering to those in need. “Then we will submit it to the Holy Father and he will take it up. That is what the synod is supposed to be. And I am happy about the way it goes on.”

“And, of course, as the Holy Father very clearly mentioned, nobody is going to touch the doctrine,” he said. “Apart from that, as the pastor of the universal church, we leave (the final decisions) to the Holy Father for his discretion and his leadership role as the successor of the apostle Peter.”

Eastern Christians in India, both Catholic and Orthodox, he said, have a pastoral approach to the family that others would do well to imitate. “Just for example, when somebody dies at home, in our tradition a priest has to visit them at least three times because he has to do services on three occasions. He cannot do only two of them for his convenience; he has to be there with the people, praying.”

After listening to some 200 speeches in the synod hall, the cardinal said the sorry state of many families in the West appears to be a result of “the erosion of spiritual values.”

“When we think money can do everything, when we think modern facilities will bring you all happiness, it is something in vain,” he said. “Humanity — men and women — we need the superpower that is God himself to guide us, to provide everything for us.”

Pope Francis, he said, continually reminds Catholics of the dangers of “self-complacency, the greed of money and power and also the lack of understanding toward the needs of others.”

Contributing to this story was Robert Duncan at the Vatican.

NEXT: Be joyful pastors, use God’s word to heal people, delegates tell synod