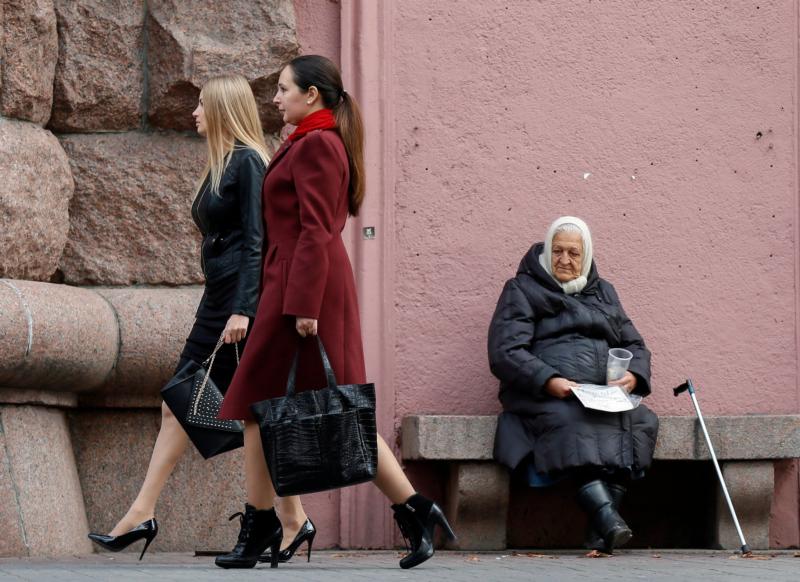 An elderly woman asks for money as women pass her by in Kiev, Ukraine, Oct.23. While they did not grab headlines, the topics of elderly and people with disabilities, openness to life and the plight of migrants and refugees were also on the agenda of the Synod of Bishops on the family. (CNS photo/Sergey Dolzhenko, EPA)

VATICAN CITY (CNS) — While they did not grab headlines, the elderly and people with disabilities, openness to life and the plight of migrants and refugees were also on the agenda of the Synod of Bishops on the family.

Affirming the church’s teaching on the “sacred and inviolable character of human life,” the synod members not only denounced the tragedy of abortion, they also expressed their closeness to young mothers, abandoned children and those suffering the consequences of abortion.

The report also denounced euthanasia, saying that society is called to “care for the elderly, protect people with disabilities, assist the terminally ill, comfort the dying, and firmly reject the death penalty.”

One of the most important tasks of Christian families, the report said, is to “safeguard the bond between generations for the transmission of the faith.”

While birth rates are dwindling in Western countries, the report noted, the number of elderly people continue to rise and they are often “perceived as a burden” in increasingly industrialized societies. The synod fathers also praised the role of grandparents, whose presence within the family deserved “special attention” and are crucial in passing on the faith to future generations.

In the eyes of synod members, the situation of men, women and children scattered and divided due to war, persecution and poverty was another of the most heart-breaking situations affecting families.

Forced migration, which “traumatizes people and destabilizes the family,” requires a two-fold pastoral ministry not only for migrants, but also for the families they have left behind, the report said.

“Humanity’s history is a history of migrants: this truth is inscribed in the lives of people and of families,” the report said. “Our faith also stresses this: We are all pilgrims.”

The value of families who endure the difficulties of lovingly caring for members who have disabilities or special needs also was emphasized. Those families, the report said, “give the church and society a precious witness of faithfulness to the gift of life.”

“The family that accepts with the eyes of faith the presence of people with disabilities can recognize and guarantee the quality and value of every life, with its needs, its rights and its opportunities,” the report said.

Archbishop Joseph E. Kurtz of Louisville, Kentucky, president of the U.S. Conference of Catholic Bishops, described the synod’s response to families of people with special needs as “among the most poetic areas” of the report.

It’s a particularly moving point for Archbishop Kurtz, whose older brother Georgie was born with Down syndrome.

“I don’t want to minimize the heroic nature of what people are going through, especially as they receive a child with special needs, but the gift is just extraordinary,” Archbishop Kurtz told journalists Oct. 25. This gift, he noted, was not only for his family but for his neighborhood, parish and town.

Following the death of their parents, Georgie lived with his younger brother in two rectories and a bishop’s house until his death in 2002. Archbishop Kurtz said that Georgie’s presence “changed the nature of those rectories.”

“They became a home,” the archbishop said. “I never anticipated that.”

NEXT: Synod calls for greater promotion of women’s role in church