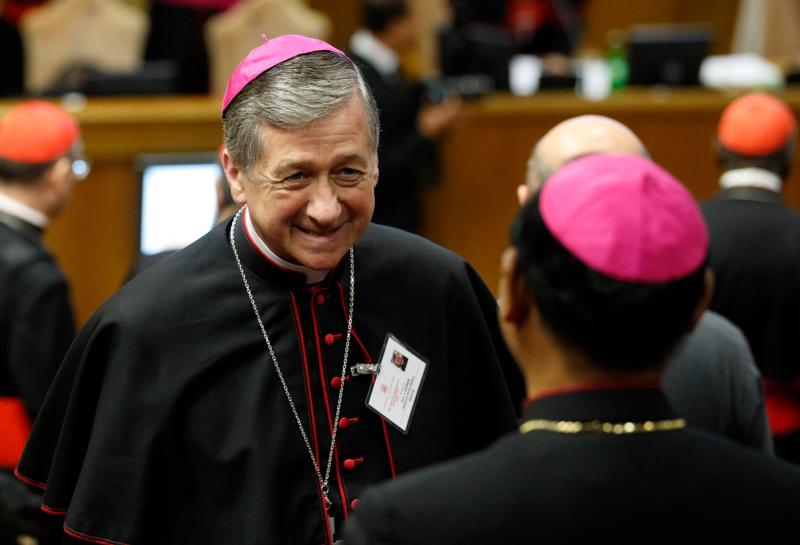 Archbishop Blase J. Cupich of Chicago talks with a bishop before a session of the Synod of Bishops on the family at the Vatican Oct. 24. (CNS photo/Paul Haring)

VATICAN CITY (CNS) — Basic principles of human dignity are being violated repeatedly in the Middle East as conflict continues, particularly in Syria and Iraq, but also in Jerusalem and other areas of the Holy Land, said members of the Synod of Bishops on the family.

“Our voices join the cry of so many innocents: No more violence, no more terrorism, no more destruction, no more persecution,” said the synod’s declaration, released by the Vatican Oct. 24.

While the focus of the message was the Middle East, the synod participants also expressed “equal concern, care and love for all the families that find themselves in analogous situations in other parts of the world, especially in Africa and in Ukraine.”

Synod members described the wars in the Middle East as being marked by “unheard of brutality.”

“The use of weapons of mass destruction, indiscriminate killings, decapitations, kidnappings, trafficking women, the conscription of children, persecution because of creed or ethnicity, devastation of places of worship, destruction of the cultural heritage and numerous other atrocities have forced thousands of families to flee their homes and seek refuge elsewhere,” the declaration said.

Synod members thanked Jordan, Lebanon, Turkey and those European countries that have welcomed the refugees, but they insisted the international community must to more to bring peace to the region.