World expects believers to work together for peace, pope says 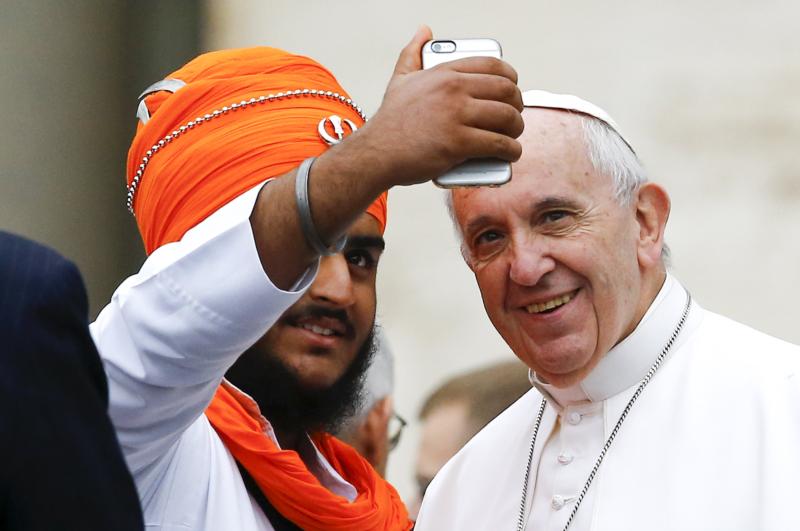 Pope Francis poses for a selfie with a member of the inter-religious community during his weekly audience in St. Peter's Square at the Vatican Oct. 28. (CNS photo/Stefano Rellandini, Reuters)

VATICAN CITY (CNS) — The world expects all people of religious faith to work with everyone for a better future, Pope Francis told representatives of major religions.

“We can walk together taking care of each other and of creation” in joint projects that fight poverty, war and corruption and help people live in dignity, he told them during a special general audience dedicated to interreligious dialogue.

The audience in St. Peter’s Square Oct. 28 marked the 50th anniversary of “Nostra Aetate,” the Second Vatican Council’s declaration on relations with other religions; the audience also recalled the historic first World Day of Prayer for Peace in Assisi, Italy, Oct. 27, 1986.

“The flame, lit in Assisi, spread to the whole world and marks a permanent sign of peace,” Pope Francis said in his address.

The rain-soaked square was awash with color as thousands gathered under colorful umbrellas or plastic ponchos. Large groups of people came from other Christian communities and from other world religions and many held aloft olive branches. Representatives of many religious traditions sat in a VIP section near the pope and prayed in silence with him at the end of the audience.

In his written address, the pope said, “The world looks to us believers, it urges us to collaborate with each other and people of goodwill who do not profess any religion, it asks from us effective responses to many issues: peace, hunger, poverty,” the environmental and economic crises, corruption, moral decay and violence — especially that waged in the name of religion.

Religions don’t have a special “recipe” to solve these problems, he said, “but we have a great resource — prayer. Prayer is our treasure,” which believers turn to in order to ask for those gifts people are yearning for.

Concerning the future of interreligious dialogue, he said, “the first thing we have to do is pray. Without the Lord, nothing is possible; with him, everything becomes” possible.

He asked that prayer lead people to follow the will of God, who wants everyone to recognize each other as brothers and sisters and to form a “great human family in a harmony of diversity.”

Unfortunately, much of the violence and terrorism unfolding in the world have made people suspicious or critical of religion, he said.

However, “although no religion is immune from the risk of fundamentalist or extremist deviations,” he said, people must look at the positive aspects of religious beliefs, especially how they are a source of hope for so many.

Pope Francis said respectful dialogue can lead to friendship and concrete initiatives between religious believers in serving the poor, the elderly, the marginalized and immigrants.

In fact, the upcoming Year of Mercy is the perfect occasion to work together on charitable projects, he said.

Charity, “where compassion especially counts, can unite with us many people who do not consider themselves to be believers or who are seeking God and truth,” and with anyone who makes those in need a priority, he said.

The pope also praised the profound improvements in Jewish-Christian relations. He said the past 50 years have seen indifference and conflict turn into collaboration and goodwill, and enemies and strangers have become friends and family.

Mutual understanding, respect and esteem make up the only path for fruitful dialogue, not only with Jews, but with Muslims as well, he said.

“The dialogue we need has to be open and respectful,” he said, and includes respecting people’s right to life, physical integrity and fundamental freedoms like freedom of conscience, thought, expression and religion.”