Youths at national conference ‘get’ the vitality of the church 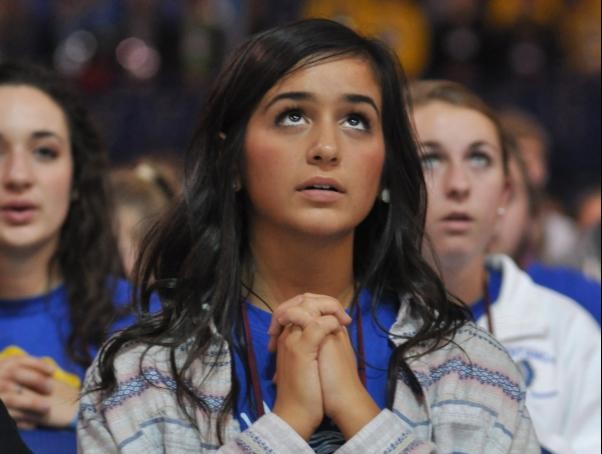 Alaina Sincich, a member of St. John Neumann Parish in Sunbury, Ohio, kneels in prayer Nov. 21 during the closing Mass of the National Catholic Youth Conference at Lucas Oil Stadium in Indianapolis. The Mass was attended by 23,000 youths from across the country. (CNS photo/Sean Gallagher, The Criterion)

INDIANAPOLIS (CNS) — As 23,000 youths from across the country worshiped together during the closing Mass of the National Catholic Conference in Indianapolis, Leanna Long felt “amazingly overwhelmed” to be in the midst of so many people who shared her faith.

She attended the conference from her home in North Carolina, where Catholics are a small minority of the overall population.

“We know the church is large,” said Long, a member of St. Thomas More Parish in Chapel Hill, in the Raleigh Diocese. “But to be able to see it and know that I’m not alone (is helpful).

“We’re told that where two or three are gathered, (Jesus) is in your presence. Well, I’m one of one in my school. Is God with me still? The answer is, ‘Yes.’ Even though I’m in North Carolina and someone else is in New Hampshire, we’re still … praying together,” she told The Criterion, newspaper of the Indianapolis Archdiocese. “We’re still gathered together, and he’s there.”

In her words, Long captured the church’s youthful vitality and diverse universality. Both were on display Nov. 21 as conference attendees were led in worship on the feast of Christ the King by Cardinal Oscar Rodriguez Maradiaga of Tegucigalpa, Honduras, who was the principal celebrant.

During his opening remarks at the Mass, Cardinal Rodriguez shared with his young listeners the mission they were being given as they returned to their homes.

“This is not the end,” he said. “This is the beginning of another stage when you will go back to your places in order to spread the kingdom of Jesus Christ.”

In his homily, Cardinal Rodriguez reflected on the feast of Christ the King that the church was celebrating that weekend.

“Today, we want to celebrate all his triumphs in one single feast, especially established to show Jesus as the only sovereign (in) a society that seems to want to turn its back on God and not acknowledge any of this,” said the cardinal, who is a close adviser of Pope Francis.

Cardinal Rodriguez later exhorted his “young brothers and sisters” “to spread out his reign of love, with all the values of the kingdom.”

The kingdom of Christ, he said, is “the salt of the earth, the light of the world, the leaven of the dough, a sign of salvation in order to build a more just world, more brotherly, one based on Gospel values, the hope and eternal joy to which we are all called.”

The feast of Christ the King also leads the Catholic Church to consider its ultimate fulfillment at the end of time, and the relevance of that future event to the world here and now, he said.

“Today’s feast is like experiencing an anticipation of the second coming of Christ in power and majesty, the glorious coming which will fill the hearts and will dry forever the tears of unhappiness,” Cardinal Rodriguez said. “And, at the same time, it is an encouragement to make real this experience of the second coming by our good works, because the hope of a new earth should not scare us.

“Rather, it should strengthen our commitment to cultivate the earth, where that body of a new human family grows and can give us an advance taste of the new world.”

In addition to the 23,000 youths participating in the Mass, approximately 250 priests concelebrated. The liturgy also featured 18 bishops, 50 deacons and 50 seminarians.

The NCYC closing Mass capped the conference that began Nov. 19 and took place in the Indiana Convention Center and Lucas Oil Stadium in Indianapolis.

The Archdiocese of Indianapolis has hosted the last three conferences, which are held every two years. It is scheduled to host the next one in 2017. The conference is sponsored by the National Federation of Catholic Youth Ministry.

While many Catholic youths traveled thousands of miles to attend the National Catholic Youth Conference, Frankie Auriemma’s trip to the event only took about 20 minutes.

A member of St. Susanna Parish in Plainfield, a suburb of Indianapolis, Auriemma was proud that the archdiocese was hosting so many Catholic youths from across the country as she looked upon the attendees in the stadium prior to the start of the closing liturgy.

“It’s here in our hometown. That’s crazy,” she said. “We get to be the hometown. I can say, ‘Yeah, I’m from Indianapolis. It’s cool. This is my home turf.’ It makes me really proud. This is where I grew up. I’ve been here my whole life.”

Indianapolis Archbishop Joseph W. Tobin expressed his pride in the Catholic Church in central and southern Indiana for working hard to host the youth conference by telling the story of St. Mary Parish in Lanesville, which sent 20 youths to the conference and also 40 volunteers.

“Young people face particular challenges today,” Archbishop Tobin said. “In the heart, we know what it means to be young. And we can serve them. I’m so pleased that so many people in the archdiocese believe in the young people.”