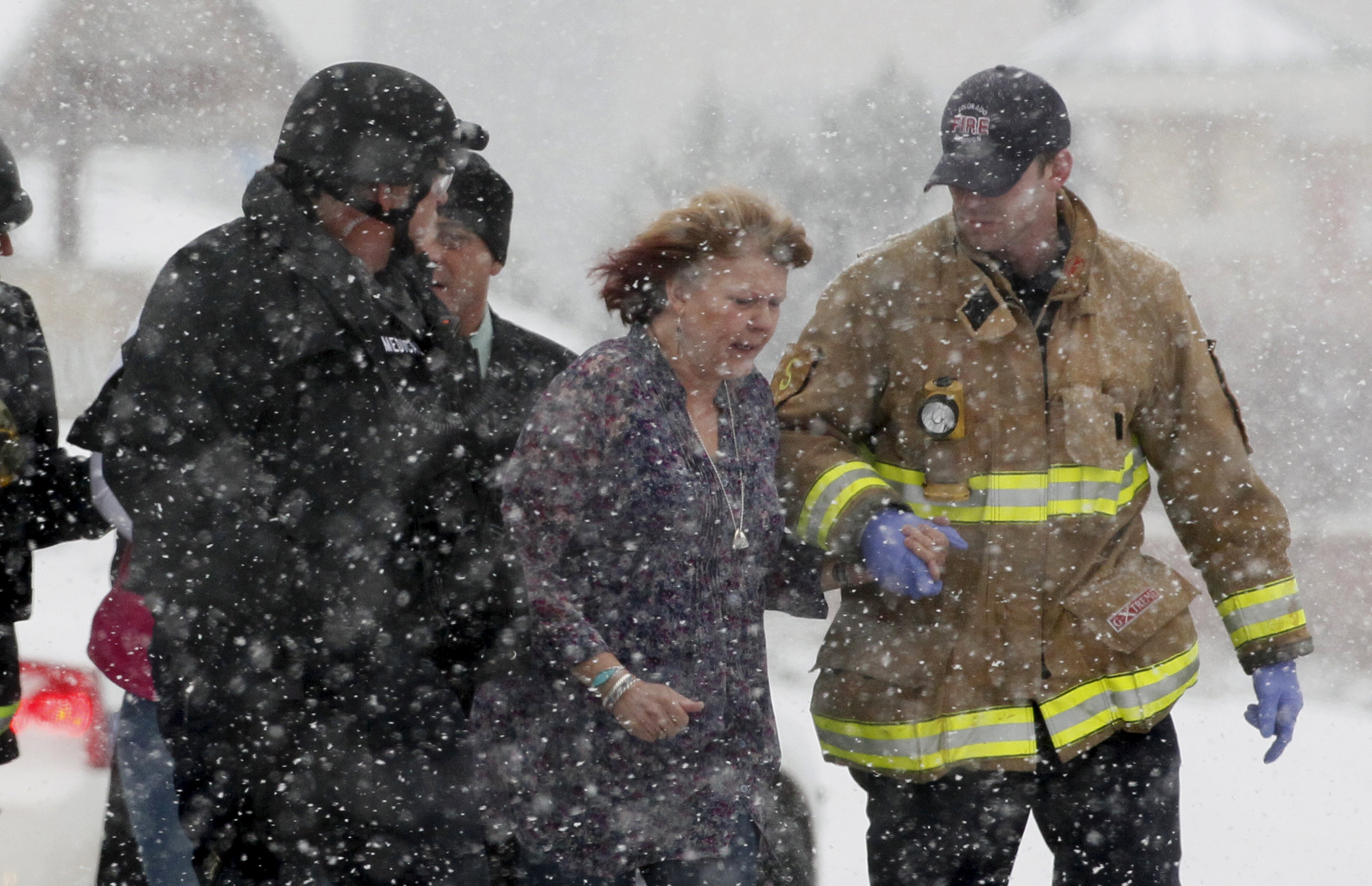 A woman is evacuated from a building where a shooter was suspected to be still holed up at a Planned Parenthood clinic Nov. 27 in Colorado Springs, Colo. Police say Robert Lewis Dear killed three people during the shooting rampage and hours-long standoff at the clinic and was later taken into custody. (CNS photo/Rick Wilking, Reuters) 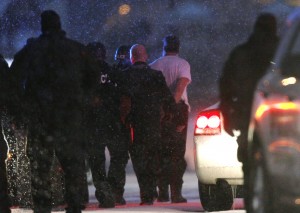 A suspect is taken into custody Nov. 27 outside a Planned Parenthood clinic in Colorado Springs, Colo. Police say Robert Lewis Dear killed three people during the shooting rampage and hours-long standoff at the clinic and was later taken into custody. (CNS photo/Rick Wilking, Reuters)

COLORADO SPRINGS, Colo. (CNS) — A priest who celebrates Mass every Friday morning on a sidewalk near the Planned Parenthood clinic targeted by a lone gunman Nov. 27 said the shooter’s actions were the antithesis of the pro-life cause.

“We want the conversion of Planned Parenthood, not their destruction,” said Father Bill Carmody, the longtime Respect Life director for the Diocese of Colorado Springs. “The pro-life movement has no place for violence.”

The attack on the clinic in northwest Colorado Springs left three people dead, including a police officer, and nine others wounded. The clinic reported that none of its employees or patients was among those killed or seriously wounded in the Black Friday attack.

The clinic sits near a busy shopping center that includes a grocery store, a bank and several other businesses. After the attack broke out around 11:30 a.m., local time, patrons and employees of the businesses “sheltered in place” for nearly six hours while police tried to contain the alleged shooter, Robert Lewis Dear, 57. The standoff ended with Dear’s arrest at 4:52 p.m., local time.

Among those killed was Garrett Swasey, a police officer at the University of Colorado at Colorado Springs and father of two.

The clinic is the frequent site of prayer vigils and other activities, in addition to the pro-life Masses, leading several national media outlets to speculate that Dear was a member of the pro-life movement.

However, Father Carmody said he did not recall ever having seen or spoken to Dear. On the day of the shootings, he had celebrated his usual weekly Mass, but he said that he and others in attendance departed shortly afterward because of the snowstorm hitting the region.

“We were long gone” before the attack started, Father Carmody told The Colorado Catholic Herald, the diocesan newspaper of Colorado Springs.

Others who regularly pray outside the clinic also said they did not recall seeing Dear at any pro-life events.

Law enforcement officials would not discuss a motive for the shootings because their investigation was still underway. Dear was scheduled to appear in court Nov. 30.

According to The Gazette daily newspaper, Dear previously lived in South Carolina and North Carolina and had arrest records in both states. Voting records show that Dear maintains a residence in Hartsel, a small town about 120 miles west of Colorado Springs, The Gazette reported.

“Yesterday, our community experienced an act of pure evil at the local Planned Parenthood clinic,” Bishop Michael J. Sheridan of Colorado Springs said in a statement. “As Pope Francis recently reminded us, ‘The path of violence and hate can never solve the problems of humanity.'”

The National Right to Life Committee’s president, Carol Tobias, said her organization “unequivocally condemns unlawful activities and acts of violence regardless of motivation. The pro-life movement works to protect the right to life and increase respect for human life. The unlawful use of violence is directly contrary to that goal.”

Bryan Kemper, youth outreach director for Priests for Life and founder of Stand True, said in a Nov. 27 statement that “although we do not know the details behind the gun violence at Planned Parenthood in Colorado, it is important to say that we are against all violence against our fellow human persons.”

Judie Brown, president of American Life League, said that “despite aggressive attempts of some news media to tie this brutal and egregious act to pro-life causes, there is no evidence supporting their case — and these attempts are simply irresponsible.”

“We abhor and condemn all acts of terrorism, all acts of savagery against the innocent — born and preborn — and we call upon our fellow Americans to do likewise,” she said in a Nov. 30 statement.

Brown urged people to “to look beneath the surface of escalating violence in this nation” to see that “the violent act” of surgical abortion is at the root of it, which “the media ignores.”

Ambuul is editor of The Colorado Catholic Herald, newspaper of the Diocese of Colorado Springs.

PREVIOUS: Youths at national conference ‘get’ the vitality of the church

NEXT: Mother Angelica remains on feeding tube, confined to bed at monastery