Catholics to U.N. summit: Warmer temperatures are just part of the problem 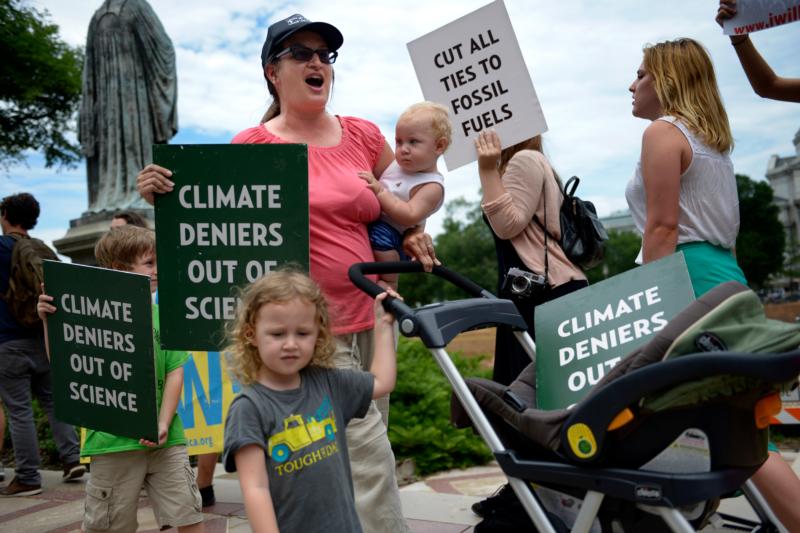 Protesters chant and display signs during a mid-June climate change rally in Washington. Faith-based environmental advocates will be among thousands of people in Paris for a rally Nov. 29, a day ahead of the opening of the U.N. climate change conference, to push world leaders for a definitive agreement on carbon emissions with the goal of slowing climate change. (CNS photo/Shawn Thew, EPA)

WASHINGTON (CNS) — Yeb Sano, former climate change commissioner for Philippines, is so concerned about global warming that he and other Catholic pilgrims are walking 900 miles from Rome to Paris for the U.N. climate change conference.

It’s time, Sano believes, for world leaders to sign a binding agreement that helps reduce the impact of climate change.

The walkers left Rome at the end of September and plan to arrive in time for the summit, which runs Nov. 30-Dec. 11. Before leaving from St. Peter’s Square at the Vatican, Sano briefly met Pope Francis, whose encyclical, “Laudato Si’, on Care for Our Common Home,” champions how a change of heart is necessary to protect the earth and all its inhabitants.

“I came face to face with Pope Francis and I wanted to thank him for his courage and leadership on the climate issue,” Sano wrote in an email to Catholic News Service in early November as the contingent neared Geneva.

“Pope Francis is our inspiration for this journey, and meeting him was truly a wonderful blessing.”

The pilgrimage, which has taken Sano from Philippines, across Asia and into Europe, is among dozens of actions Catholics are taking in preparation for the upcoming 21st Conference of Parties to the United Nations Framework Convention on Climate Change. Many Catholic environmental advocates are hopeful — yet some are doubtful — that the Paris summit will result in a long-term pact to reduce carbon emissions with the goal of slowing climate change.

“This could be the most important meeting in decades around climate change because it seems like everything has been leading to this moment,” said Lonnie Ellis, associate director of the Catholic Climate Covenant in Washington.

Ellis said he was buoyed not just by the actions of advocates, but that, ahead of the Paris gathering, 119 countries, including the United States and China, have submitted proposals to reduce greenhouse gases by 2030.

Such a response comes as faith leaders mount a growing campaign to bring the moral message of “Laudato Si'” to Paris: that climate change, disrespect for the environment and consumer-driven lifestyles impact the poorest people most and that the world has a responsibility to act.

“I think what Pope Francis and Catholics around the world have been able to do is refocus our minds and our hearts on the fact that is a moral issue,” Ellis told CNS. “That has immense power.”

They planned to take the stories of people already feeling the effects of climate change in Oceania, Asia, Africa and Latin America, as a way to touch the hearts of the summit delegates.

“We are going to be able to speak from our many years in mission and seeing the impact of climate change on the most vulnerable and marginalized communities that Maryknollers have served for years,” said Chloe Schwabe, director of the faith-economy-ecology project at the Maryknoll Office for Global Concerns.

Joining the Maryknoll contingent will be sisters from Philippines and Zimbabwe. In addition to the U.N. meeting, they will participate in more than two weeks of events planned by climate advocates, including what is expected to be a massive rally Nov. 29 in Paris. Parallel rallies are being planned in cities around the world.

In addition, Catholic advocates said they will be pushing for the final agreement to include reduced deforestation, assurance of territorial rights for indigenous people, land rights and access to markets for subsistence farmers, human rights in contested mining regions and financial commitments to help communities in the global South adapt to climate change.

Genevieve Talbot, research and advocacy officer for the Canadian Catholic Organization for Development and Peace, said adaptation funding is vital to prevent people from migrating or to assist them in their new locales.

“If we don’t help people now, we do have power over people’s life and death,” she said.

In South America, land rights, especially in the Amazon River basin, remain a concern, said Luis Ventura, who serves as REPAM’s liaison with the Spanish branch of the church’s Caritas network. He told CNS that church representatives at the summit will present stories about the devastation caused by deforestation in and around palm plantations in the Peruvian Amazon and the construction of a dam on Brazil’s Tapajos River that would displace indigenous communities across 750 square miles.

And in Africa, by Nov. 14 the Climate Justice Cycling Caravan was scheduled to end a 4,000-mile trip from Maputo, Mozambique, to Nairobi, Kenya. During the trip, riders talked to communities about environmental issues and gathered signatures on a petition that calls on world leaders to help the world’s poorest people to cope with the impact of climate change.

Mthetho Lungu, communications officer for the Malawi Council of Churches, said water is scarce in many areas of southern Africa. The team of cyclists teaches communities that natural disasters such as droughts and floods are connected to climate change, he said.

Bishop Kevin Dowling of Rustenburg, South Africa, told CNS it is crucial that world leaders “hear the voices on the ground.”

Noting that the task of preserving and protecting the environment belongs to everyone, Bishop Dowling said the African faith sector initiatives have been “empowering in their teaching about our interdependence and our responsibilities.”

Elsewhere in the lead up to the Paris climate conference, faith communities are conducting a month of prayer, fasting and action under the identity of #Pray4cop21. The Global Catholic Climate Movement is circulating an online petition, which will be presented to the conference.

Patrick Carolan, executive director of the Franciscan Action Network, said the Franciscan presence in particular will be strong, with representatives attending from around the world.

“We want to be have the presence there and to be part of the prayerful part of the meeting. We’re there to lift up from a spiritual perspective what ‘Laudato Si” talks about everything that’s going on,” he said.

The Catholic bishops of the world, too, have taken notice of the importance of the climate meeting. After concluding the Synod of Bishops on the family in Rome, the presidents of the U.S. and Canadian bishops’ conferences and the leaders of six regional bishops’ conferences called on world leaders to implement a strong, enforceable agreement in Paris.

In a four-page statement, the bishops appealed to government leaders to reach a “fair, legally binding and truly transformational climate agreement” in Paris. In putting forth 10 “calls” to the summit, the bishops urged delegates to take “courageous and imaginative political leadership” and to adopt legal frameworks that “clearly establish boundaries and ensure the protection of the ecosystem.”

While the summit’s main focus will be finalizing an agreement on carbon emissions for nations to follow, advocates said the real work will be in implementing the final pact and that will require cooperation among business, governments, activists and local communities backed by diligent observance that the emissions goals are reached.

In addition, side meetings will look at actions necessary in local communities to hold countries responsible for the pledges they will have made in Paris, several advocates told CNS. The climate change conference lasts less than two weeks , but “we are looking at how we are building this strong international movement and how we can continue it from 2016 and beyond,” Carolan said.

Talbot, of Development and Peace, said from her office in Montreal that however strong the final agreement, each person can help slow climate change.