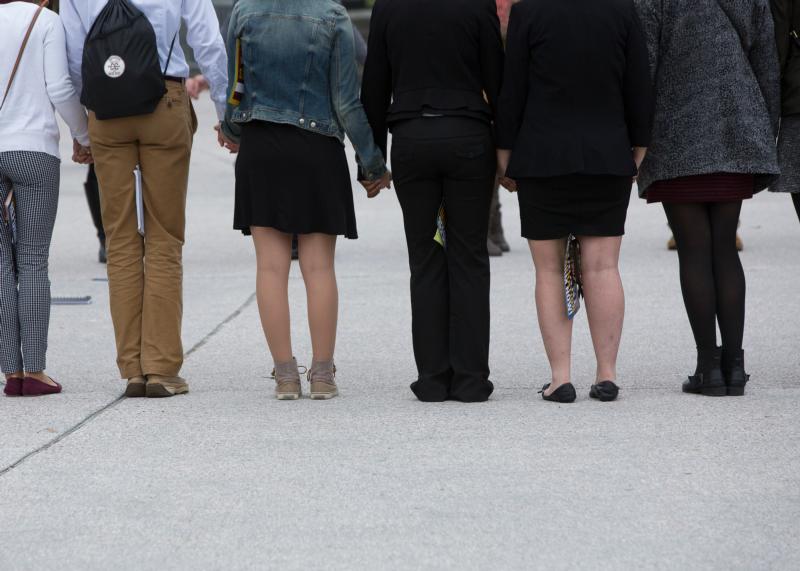 People hold hands and pray near Capitol Hill in Washington Nov. 9 as part of the 18th Ignatian Family Teach-In for Justice. More than 1,200 students and young adults, affiliated with Jesuit institutions, registered for the Nov. 7-9 national social justice gathering, which ended with an advocacy day on the Hill and visits to members of Congress. (CNS photo/Tyler Orsburn)

WASHINGTON (CNS) — Eight teenage boys, neatly attired in jackets and ties in a chilly breeze on the West Front of the U.S. Capitol, were softly rehearsing their lines.

Some were immigrants from Mexico and Central America. Others were born in the United States, but their parents entered this country illegally. All are receiving an education at Marquette University High School in Milwaukee.

Their presentations to members of Wisconsin’s congressional delegation — usually to legislative assistants — mentioned their mothers, admiration of their parents’ courage and the importance of dealing with their situations face to face, not as statistics.

“They’ve been effective so far,” said Dan Miller, a Spanish teacher who accompanied them Nov. 9 as part of the Ignatian Solidarity Network’s Advocacy Day, which ended the group’s weekend conference. Founded in 2004, the network is led by laity and works on social justice issues such as immigration reform with Jesuit colleges, high schools and parishes.

More than 1,200 students and young adults from around the country registered for the network’s 18th Ignatian Family Teach-In for Justice Nov. 7-9.

Last year, the high schoolers met with U.S. Sen. Ron Johnson, R-Wisconsin, who is about to release his own report on border security. The senator recently announced: “Let’s end some of these incentives — things like Deferred Action Childhood Arrivals. That’s incentivized these children from Central America to come into America because basically if they get here, they are staying.”

In an interview Nov. 3 after his return from a trip to Central America, he told a FOX-TV affiliate the high demand for drugs in the U.S. is one reason the U.S. Mexico border is “unsecured,” as he put it.

Miller told Catholic News Service that last year, “the kids were terrified to just walk into Johnson’s office, since he’s a hard-liner about sealing the border. It was difficult to have him listen to our opinions. But then they just went in and spilled their guts, and said things like, ‘I’m working really hard, and am getting a good education, but my opportunities are really going to be limited.'”

“It puts a lump in your throat to see them do that,” he added.

The group hoped for a friendly response this year from Rep. Reid Ribble, another Wisconsin Republican, who sponsored a bill recently passed by the House to combat human trafficking. “Good government protects the defenseless,” Ribble said in a statement.

On Nov. 6, the boys met with Sen. Tammy Baldwin, a Wisconsin Democrat, who warned them that congressional action on immigration is “too touchy at the moment,” Miller recalled.

A delegation of Marquette University students was aggressive in confronting Kate Donnell, a legislative aide to House Speaker Paul Ryan. Last week, Ryan wrote in USA Today that the House “will not vote on comprehensive immigration legislation as long as President (Barack) Obama is in office. And the reason is simple: The American people can’t trust him to uphold the law.”

They said Donnell was defensive, telling them, “That doesn’t mean we’re not working on it. It means it won’t be brought to the floor on a vote.”

“Which is extremely frustrating,” said Lindsay Caruso, since not long ago, Ryan said he favored “earned legalization” as a path to citizenship. “He negates his original morals for this political gain.”

Julia Hilbert expressed her argument in faith terms, telling Donnell that as a pro-life Catholic, she “was not respecting the human dignity” of those who come to the United States seeking to improve their lives.

Mauricio Porras is American-born but his parents returned to Ciudad Juarez, the Mexican city that was long a center for drug cartel murders. He’s hoping to find a way to bring his parents to the U.S., but finds the effort frustrating.

“Even though my story’s out there, politicians are not going for it,” he told CNS. “They just want to hold back on the issues.”

The largest single group among the 1,200 visiting Capitol Hill numbered 50, from Walsh Jesuit High School in Cuyahoga Falls, Ohio. That was enough to split up to visit Republican Sen. Rob Portman and Reps. Marcia Fudge and Tim Ryan, both Democrats, on topics including climate change and human rights in Central America.

Campus minister Lauren Fraser, who has brought groups to three previous advocacy weekends, thinks the enthusiasm generated by students caught on. “Students listen so much better to other students than adults.”

Sydney Wolk, a senior who had attended last year, was one of those. “I really hope they hear our personal stories, our Ignatian values and are impressed that we care about what they do on Capitol Hill,” she said.

Adding, in the manner of an experienced lobbyist, “and that we know we can vote and they can do what we’re asking them to do.”

NEXT: Catholics to U.N. summit: Warmer temperatures are just part of the problem