Day’s granddaughter urges Catholics to speak out against war, injustice 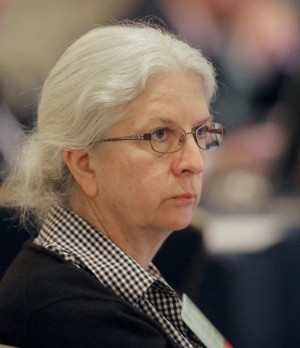 Dorothy Day’s granddaughter Martha Hennessy listens to speakers during the 2015 fall general assembly of the U.S. Conference of Catholic Bishops in Baltimore Nov. 17. Hennessy, 60, is one of Day’s nine grandchildren. (CNS photo/Bob Roller)

DERWOOD, Md. (CNS) –- Dorothy Day’s granddaughter Martha Hennessy looks a little like her grandmother with her pulled-back white hair, and although she is soft spoken, she likely sounds just like her activist grandmother, too, when talking about helping the poor and promoting peace.

Hennessy spoke about such topics and the influence and memories of her grandmother, who is a candidate for sainthood, at a morning talk Nov. 21 in the church basement of St. Francis of Assisi in Derwood.

Her observations, to a group of about 50 people sitting at long cafeteria tables, were not just sentimental musings but challenges, stressing, for example, that Catholics have a responsibility to respond to violence, poverty and wars.

She also spoke candidly about her grandmother, noting that even though Day was quoted as saying: “Don’t call me a saint. I don’t want to be dismissed so easily,” she is pretty sure her grandmother is “great with the idea” now.

She said the church needs Day’s example as a laywoman, mother and grandmother who lived her faith intentionally.

Hennessy, 60, is one of Day’s nine grandchildren. Seven are still living. Her mother, Tamar, Day’s only child, died in 2008. Hennessy, who has three children and five grandchildren, has distinct childhood memories of Day who died in 1980 but she also remembers her as an adult since she was 25, and was raising her 2-year-old son, when her grandmother died.

Day’s influence on Hennessy, 60, is palpable. “She has played a role in every decision in my life,” Hennessy told the group.

Her first memory of Day is when she was 3, at her home sitting on her grandmother’s lap and listening to her tell a story.

“We were all enthralled when she came,” Hennessy said, adding: “I believe that was my first awareness of the presence of God being that close to her heart and hearing her voice resonate in her chest.”

She remembers how her grandmother was sustained by prayer: saying the rosary, attending daily Mass and reading the lives of the saints. She also found her spiritual path living in communion with the poor.

Hennessy, a retired occupational therapist who lives in Vermont, also spends a good deal of time living with the poor by volunteering at the Catholic Worker Maryhouse in East Village, a New York City neighborhood, where she cooks, washes dishes and answers the door and the phone, or as she puts it: what she would do at home. She also has visited war-torn regions to meet and speak with people and has been arrested a handful of times for acts of civil disobedience protesting war, drone use and pollutants.

The experience at the Catholic Worker houses of hospitality — a movement founded by her grandmother and Peter Maurin — always pushes her beyond herself, she said, which she described as part of the blessings of the homes.

“We can’t isolate ourselves from the poor,” she said.

Helping others is no doubt in Hennessy’s DNA, as is her Catholicism, but her involvement with the church is something she has only returned to in the past 10 years. It’s been a journey, she told the group at the Maryland suburban church.

These days she gives about a dozen talks a year at colleges or parishes, talking about her grandmother and the legacy she left behind.

Days before her visit to the parish, Hennessy attended the U.S. bishops’ annual fall general assembly in Baltimore representing The Catholic Worker newspaper as one of its editors. Just three years ago at the meeting, the bishops, by voice vote, endorsed Day’s sainthood cause, which was opened in 2000 and she was given the title of “servant of God.”

During a news briefing at this year’s meeting, Hennessy asked if the bishops would condemn the possibility of escalating war with Syria after the recent attacks in Paris. Archbishop Joseph E Kurtz of Louisville, Kentucky, who is president of the U.S. Conference of Catholic Bishops, said the bishops would approach the current situation in the church’s tradition of just-war theory, which among other criteria asks whether the damage inflicted by the aggressor is “lasting, grave and certain” and examines whether all other means to ending the aggression “impractical or ineffective.”

Archbishop Kurtz said the bishops would be in union with the pope’s view and also “see war is not a solution to problems.”

Hennessy reminded the bishops that two months earlier Pope Francis singled out her grandmother as one of four Americans who had made the country better in his speech to a joint meeting of the U.S. Congress. Besides Day, he mentioned the Rev. Martin Luther King Jr., Abraham Lincoln and Trappist Father Thomas Merton. Hennessy said three of the four names he mentioned were pacifists who favored nonviolence.

Coincidentally, when the pope was making this address, Hennessy was in the middle of a three day fast and vigil across the street from the United Nations with a group advocating their solidarity with the pope’s messages about caring for the poor and the environment.

She attended the pope’s Mass at Madison Square Garden in New York which she said she is still trying to process. “It wasn’t the best venue, but his holy presence was still felt there in that huge space,” she said.

Hennessy told the parish group, many of whom were more than familiar with her grandmother’s works and writings, that she said what needed to be said at the bishops’ meeting, but it wasn’t something that fell on her shoulders alone.

“All of us are responsible to speak out against war,” she said.

PREVIOUS: Sainthood cause for local priest approved by U.S. bishops