Sainthood cause for local priest approved by U.S. bishops 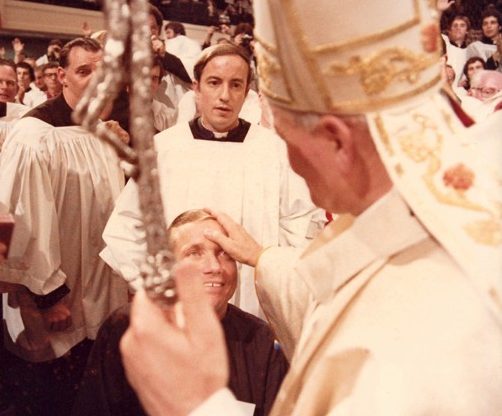 BALTIMORE (CNS) — The U.S. bishops Nov. 17 endorsed the sainthood causes of a Philadelphia native who in 1974 became the first quadriplegic priest to be ordained for the Catholic Church, as well as a Spanish missionary regarded as a mystic who served in the American Southwest and a Native American and his companions who were martyred in colonial Florida.

The bishops’ action came in a voice vote at the end of a canonically required consultation that took place the second day of their bishops’ annual fall general assembly in Baltimore. Their endorsement was needed for the causes to move forward.

Father Atkinson was born in Philadelphia in 1946 and baptized at St. Alice Church in Upper Darby, where he also attended grade school before graduating in 1963 from Msgr. Bonner High School in Drexel Hill, staffed by the Augustinian fathers.

Young Atkinson was an Augustinian novice when he broke his spine in a tobogganing accident in 1965 that left him a quadriplegic and seemingly ended his dream to become a priest. But with the help of Augustinians and a motorized wheelchair, he continued his theological studies. After Pope Paul VI granted special permission, Cardinal John Krol ordained Father Atkinson in 1974 at St. Alice Church.

In presenting the cause of Father Atkinson, Archbishop Charles J. Chaput said the priest’s life is a “beautiful” story and his cause “would be a source of encouragement for people with this kind of disability (and) reminds us of the great generosity of his family and his religious community — as they were all called to holiness” in their care for him.

Father Atkinson went on to teach for almost 30 years at Msgr. Bonner High School. He died in 2006 at age 60.

Los Angeles Archbishop Jose H. Gomez presented the cause of Father Ellacuria, a 20th-century priest from the Basque region of Spain whose ministry was primarily in Los Angeles, San Diego and Phoenix. The priest, who died in 1981, founded a religious congregation named the Missionaries of Perpetual Adoration, later referred to as the Missionaries of Fatima, reflecting his devotion to the message of Our Lady of Fatima.

He was known for spending long periods of time visiting and consoling the sick and dying, and also is described as having an extraordinary gift for attracting vocations.

Regarding Cuipa and his companions, Bishop Gregory L. Parkes of Pensacola-Tallahassee, Florida, told the bishops the group should be viewed as “martyrs of evangelization who gave their lives to share and live the Gospel in colonial Florida.

He said the group includes men, women and nine children; 61 are Native Americans, like Cuipa.

An Apalachee Indian converted by Franciscans, Cuipa lived at the San Luis Mission in present-day Tallahassee. He and the others were martyred between 1549 and 1706. Cuipa was studying for the priesthood when he was seized by another Indian band, nailed to a cross and set afire in 1704. Witnesses said Cuipa had a vision of Mary while he was dying.

Choosing a Native American as “the lead martyr reflects not only the sacrifice and success of the missionaries, but will also highlight the many Native Americans — over 1,000 — killed for the faith whose names are lost in history.” 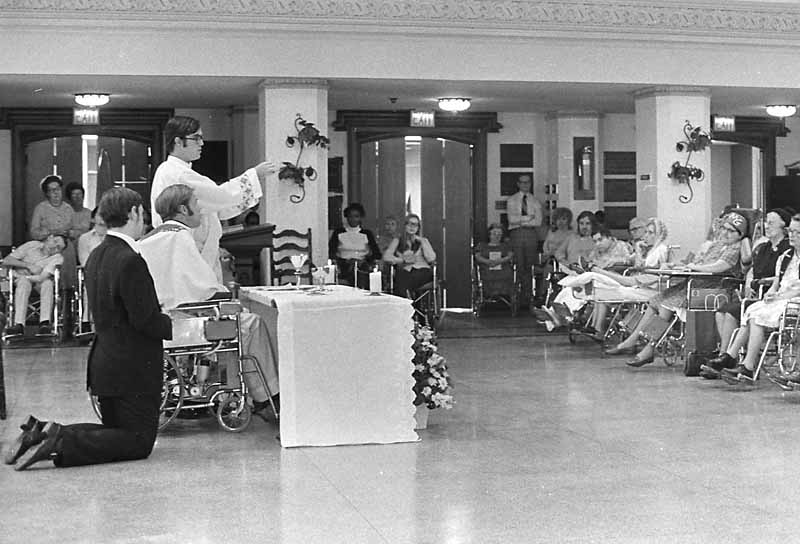 Father Atkinson celebrates his first Mass, with the help of another priest, at the Fieldhouse at Villanova University, in this 1974 file photo. (Philadelphia Archdiocesan Historical Research Center: Robert and Theresa Halvey Photograph Collection)

NEXT: Day’s granddaughter urges Catholics to speak out against war, injustice