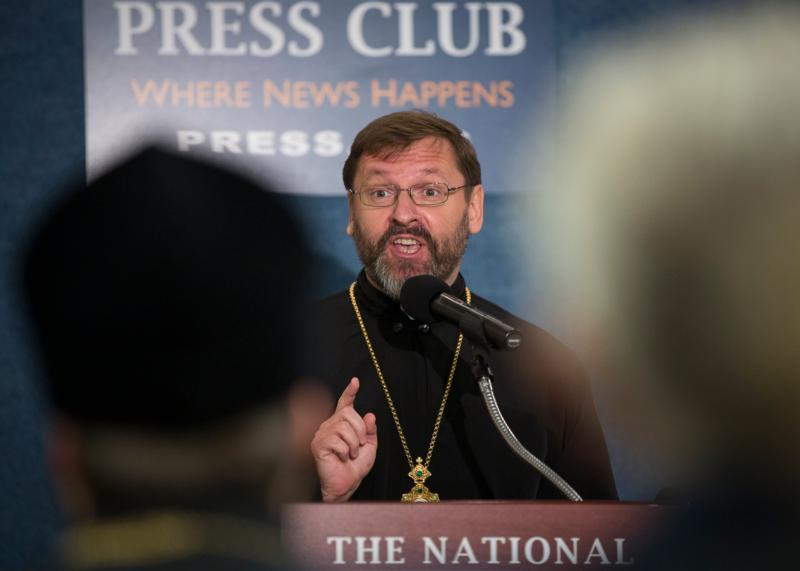 WASHINGTON (CNS) — “Time is of the essence” to get humanitarian aid to the people of Ukraine as winter sets in, a group of Ukrainian religious leaders said in a Nov. 9 appeal to President Barack Obama.

They said they were making the appeal “on behalf of our people to help address the humanitarian catastrophe gripping our country. The needs are enormous, ranging from medical supplies to everyday items such as food, water and clothing.”

At a news conference at the National Press Club in Washington, the Ukrainian group issued a joint statement that cited U.N. statistics showing that as a result of fighting between the army and pro-Russian separatist rebels in Ukraine that continues unabated, over 5 million people — including 1.7 million children — are in desperate need of humanitarian assistance.

“The challenges of this human tragedy are overwhelming,” the group said. “Even the most conservative estimates show that over 65 percent of projected needs have yet to be met.”

“While the global news media regularly reports on Russia’s war against Ukraine, government reforms and financial challenges, there is rarely any mention of the extraordinary dimensions of the human suffering caused by military action in the east of Ukraine,” the leaders said. “While Ukraine certainly needs greater military, financial and political assistance, our focus here must be on the humanitarian aspect.”

“As representatives of the interfaith community, we witness on a daily basis the challenges and the needs of people suffering because of this war,” they added. “And with the onset of winter, an already dire situation will only get worse. We pray for their lives and for the future of our country.”

Signers of the statement, some of whom were at the press club, include Ukrainian Catholic, Orthodox, Jewish, Muslim, Lutheran and evangelical Christian leaders.

The religious leaders said they were grateful for the assistance provided by the U.S. government to date, but “we know that the need is so much greater.”

In their statement, they appealed to the Obama administration and Congress to increase assistance and “activate the full potential” of the National Guard State Partnership Program and the Partnership for Peace “as instruments for alleviating the humanitarian catastrophe.”

The National Guard entity they described is a U.S. Department of Defense program managed by the National Guard that links U.S. states with partner countries around the world. Among its goals is to help prevent failed states, create stable regions and improve the capabilities of partner nations to protect their citizens.

Partnership for Peace is a program of bilateral cooperation between individual Euro-Atlantic partner countries and NATO.

One of the stated goals of the Partnership for Peace, the religious leaders said, is to “provide a framework for enhanced political and military cooperation for joint multilateral crisis management activities, such as humanitarian assistance and peacekeeping.”

Ukraine was the first post-Soviet country to join the Partnership for Peace in 1993.

The leaders said the programs “will allow the American people to more effectively and rapidly access and deliver already available medical and humanitarian supplies to Ukraine — literally within days.

“We each represent distribution networks that cooperate with each other; we now ask for the resources to meet the growing human needs,” they said.

NEXT: Some believe Keystone pipeline through country’s midsection is not dead yet