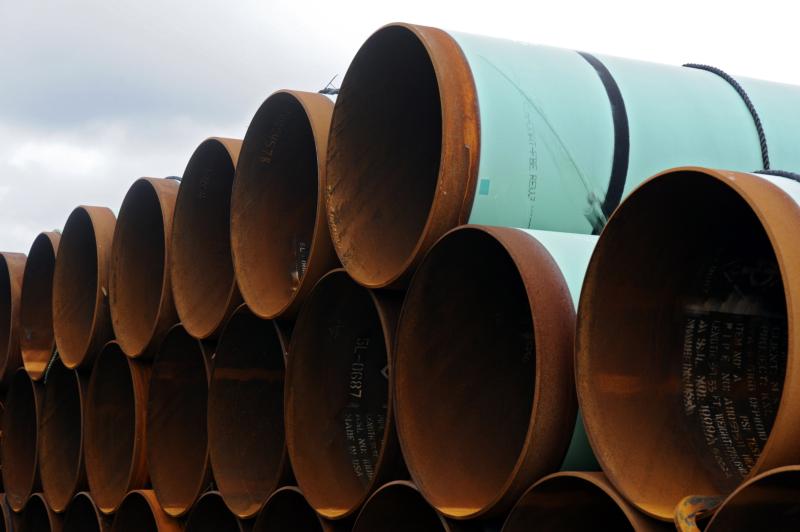 A file photo taken in 2012 shows pipes stacked at a storage yard in the TransCanada Pipe Yard near Cushing, Okla., that is to be used for the Keystone XL pipeline from Cushing to the Gulf of Mexico. U.S. President Barack Obama may have denied the permit for construction of the Keystone XL pipeline to carry tar sands oil from Alberta to U.S. Gulf Coast refineries, but Keystone's opponents aren't sure the $8-billion project is dead yet. (CNS photo/larry Smith, EPA)

WASHINGTON (CNS) — President Barack Obama may have denied the permit for construction of the Keystone XL pipeline to carry tar sands oil from Alberta in western Canada to U.S. Gulf Coast refineries, but Nebraskans Susan and Jim Dunavan aren’t so sure the $8-billion project is dead yet.

TransCanada, the Calgary, Alberta-based company building the pipeline, has invested far too much time and money in the project for it to cease entirely, Susan Dunavan said.

“I feel like we’re still in the crosshairs despite what the president has done,” she told Catholic News Service.

The Dunavans, members of St. Joseph Parish in York, Nebraska, have worked for nearly eight years to block construction of the 1,179-mile pipeline that would pass through the 80 acres of pastureland they own and are restoring to virgin prairie.

Susan Dunavan has testified at state and federal public hearings. The couple has participated in rallies and workshops, primarily organized by the grass-roots organization BOLD Nebraska. Their son, Father Thomas Dunavan, pastor of SS. Peter and Paul Church in Falls City, Nebraska, in the Diocese of Lincoln, has been at their side when he’s free of parish duties.

The Dunavans’ latest effort involves a lawsuit to prevent a declaration of eminent domain by Republican Gov. Pete Ricketts on behalf of the multinational corporation. However, there’s a question over the legal standing of the lawsuit now that Obama has denied the permit.

Some of their neighbors disagree with them and the couple’s stance has not affected Jim Dunavan’s work as an agronomist whose clientele include ranchers and farmers.

Susan Dunavan is concerned by shifts that she and other anti-pipeline activists have seen in stances by public officials, revisions in laws and rewritten rules, all seemingly aimed at hindering the efforts of those opposed to the pipeline.

Pipeline opponents objected to the project because they believe it would have led to a rapid increase in oil mining in environmentally sensitive arboreal forests in northern Alberta. They said the process to extract the oil releases large amounts of carbon dioxide, hastening climate change.

The proposed project calls for building a pipeline from the oil sands to an existing pipeline in southeastern Nebraska. Because the pipeline crosses an international border, the decision for its construction rests with the White House and required extensive study by the Department of State.

Now that the president has denied the permit, saying it was not necessary to secure the country’s energy future, the Dunavans promised to remain vigilant. Susan Dunavan believes TransCanada may be rethinking its strategy and will await the outcome of the 2016 presidential election to see if it can gain a favorable outcome on a renewed permit application.

She said she cannot trust the company.

When the company pressured the Dunavans by sending contracts to purchase easements, the couple found incorrect addresses, incomplete sentences and vague language in the documents.

TransCanada spokesman Terry Cunha said in an email to CNS Nov. 12 that the company “is considering all its options including filing a new application for a presidential permit.”

After Obama announced his decision Nov. 6, Russ Girling, the company’s president and CEO, said in a statement that “misplaced symbolism was chosen over merit and science, rhetoric won out over reason.”

Members of Congress and state officials also criticized the decision, accusing Obama of taking a politically expedient stand at the cost of jobs and a strengthening of the economy.

Father Dunavan told CNS he is as concerned as his parents about the pipeline and that led him to cite Dante’s “Inferno” during a State Department hearing in Nebraska.

“The imagery and the language Dante uses is spectacular throughout the entire work,” he said. “There’s one part where he talks about the devil as winding its way through. That’s kind of like a pipeline that you don’t want to have and they’re trying to force it on you,” he said.

All of the Dunavans also said they were inspired to carry on their work by the words of Bishop Luc Bouchard, who in 2009 as bishop of St. Paul in Alberta questioned the morality of exploiting the oil fields because of the danger posed to indigenous people and the environment in a pastoral letter, “The Integrity of Creation and the Athabasca Tar Sands.”

“I wrote him that this is just wonderful because this is what I was looking for, a faith-bases support for our efforts,” Susan Dunavan said. “The whole thing is conservation and good stewardship of the land. Some people think good stewardship is exploitation. No, it’s taking care of the land. You can develop the resources, but do it in a way that’s morally acceptable.

Outside of Nebraska, environmental advocates welcomed Obama’s decision. They said it was long in coming and shows that the United States is serious about putting the brakes on rising carbon emissions, one of the primary causes of climate change ahead of the U.N. climate change conference that opens Nov. 30 in Paris.

“The Keystone pipeline was symbolic of this ever-expanding need to pull out of the ground, transport and refine fossil fuels that we know are causing climate change,” said Dan Misleh, executive director of the Catholic Climate Covenant, a coalition that includes the U.S. Conference of Catholic Bishops.

The USCCB did not take a stance on Keystone XL, Misleh said.

“While Keystone itself might not have been the game changer that some people think it would be, it’s symbolic of the larger picture of having to transition, as Pope Francis said, off of these fuels for more sustainable options,” he added.

Others thanking the president for his action included the Maryknoll Office for Global Concerns, Franciscan Action Network and the Sisters of Mercy.

NEXT: Life of Father Augustus Tolton, the son of slaves, reads like a novel